Austrian president engulfed in criticism over visit with Iran’s Khamenei

Stop the Bomb, an organization that was founded in Austria in 2007 and that opposes the Iranian government, sharply criticized Fischer. 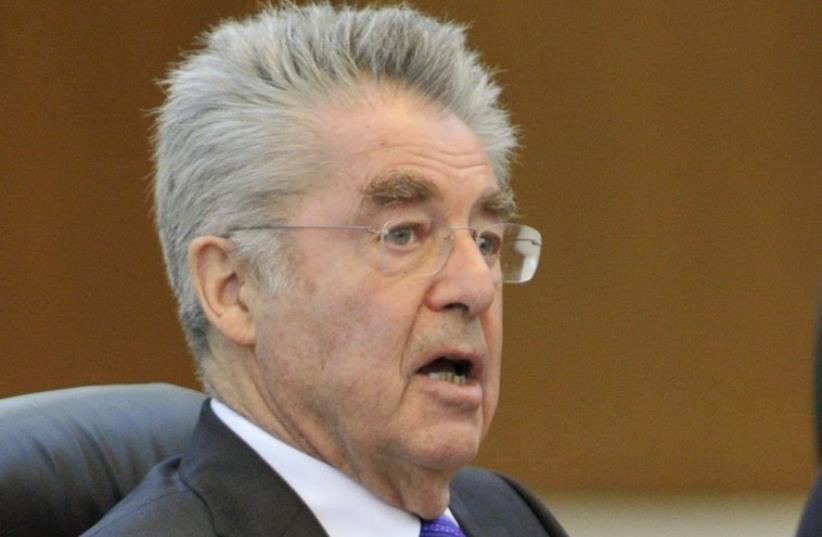 Austrian President Heinz Fischer
(photo credit: REUTERS)
Advertisement
Austrian President Heinz Fischer said he hoped to build bridges with Iran prior to his Monday visit to the country. However, he faced a storm of criticism because of his planned meeting with Supreme Leader Ali Khamenei – a rare event for a visiting non-Muslim dignitary.Fischer said he would not skirt human-rights issues.He is the first Western head of state to visit the Islamic Republic in more than a decade. Writing on Sunday on the Iran Daily website, Fischer made no mention of Iran’s human rights record.“Austria is a land of dialogue. We reject violence. We want to build bridges and want to seize every opportunity to reduce tensions and promote a climate that promises a better future than if we remain stuck in confrontation,” said Fischer, whose role in Austria is largely ceremonial.But Fischer also said in an interview with public broadcaster ORF that he would bring up Iran’s human rights record during his three day trip, accompanied by a 240-person delegation of business executives.Stop the Bomb, an organization that was founded in Austria in 2007 and that opposes the Iranian government, sharply criticized Fischer.“The Supreme Leader Ali Khamenei, whose hand Fischer will shake tomorrow, openly threatens to this day the Jewish state with destruction and denies the Holocaust,” said Stop the Bomb official Stephan Grigat.He said the trip would legitimize Tehran’s policies.“In 1991 it was Kurt Waldheim, Austria’s president with a Nazi past, who was the first Western head of state who traveled to Iran after the Islamic Revolution. Today, of all people, it is Heinz Fischer, who conceives himself as a fierce anti-Fascist, who is the first European head of state since 2004 to pay a respect visit to Iran’s anti-Semitic dictatorship,” said Grigat, the research director of the organization.He added, “If Fischer really wanted to help improve the situation in Iran, he could anytime officially invite exiled Iranian dissidents to his office in Vienna.But whoever travels to Iran together with a huge business delegation aims at flattering the rulers and legitimizes the Iranian regime’s policies.”Ariel Muzicant, vice president of the European Jewish Congress, criticized the visit, saying Austria’s political leadership and business elite would “shake hands with murderers.”The spokesman for Stop the Bomb in Austria, Stefan Schaden, took Austrian businesses to task for their activity in Iran: “Andritz, OMV, Lenzing, Raiffeisen, Erste Bank and the more than 100 other companies in the delegation must face the accusation that they directly support the brutal oppression of the Iranian population and the financing of Islamist terror organizations like Hamas and Hezbollah. Conducting business with the Iranian regime means to finance the Iranian Revolutionary Guards, which control large parts of the foreign trade as well as the nuclear and ballistic missiles programs.”Austria did not break relations with Iran after its 1979 Islamic Revolution. Fischer, whose predecessor Thomas Klestil in 2004 was the last Western head of state to visit Iran, is scheduled to meet President Hassan Rouhani and Foreign Minister Mohammad Javad Zarif.Fischer’s visit follows the signing in July of a landmark accord between Iran and world powers on its disputed nuclear program. Austria hosted the marathon talks.Reuters contributed to this report