It is not yet clear what Greenblatt will do after leaving the administration, but his departure does cast some doubt over the future of the plan. 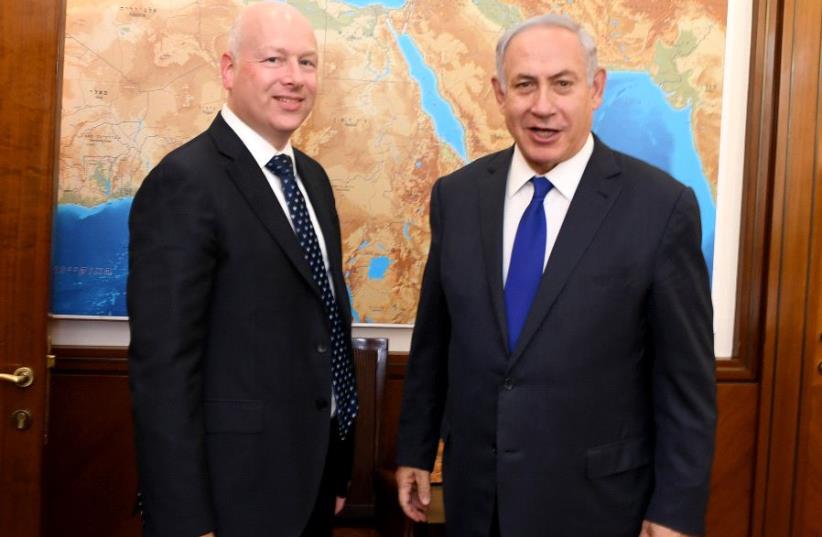 Jason Greenblatt Meets PM Netanyahu
(photo credit: MATTY STERN, US EMBASSY TEL AVIV)
Advertisement
WASHINGTON – Jason Greenblatt, US special envoy to the Middle East and architect behind the “Deal of the Century,” is leaving the administration, the White House announced on Thursday.He will stay in his role over the next few weeks until President Donald Trump unveils his peace plan, expected sometime after the election on September 17. Greenblatt is then expected to return to his family in New Jersey.Avi Berkowitz, deputy assistant to the president, and Brian Hook, special representative for Iran, will take on an increased role on the team after Greenblatt’s departure.An administration official said that Greenblatt originally intended to join the administration for two years to analyze the Israeli-Palestinian conflict, and to draft “a realistic and implementable vision to help solve the conflict and to help develop relationships between Israel and [countries in] the region.”It is unclear what Greenblatt will do after leaving the administration.Greenblatt has made numerous trips to Israel, the Palestinian territories and the Middle East since taking office nearly three years ago. His Twitter feed has been a regular source of news on his visits, and he has positioned himself as a staunch defender of Israel.

....His dedication to Israel and to seeking peace between Israel and the Palestinians won’t be forgotten. He will be missed. Thank you Jason!

Together with US Ambassador to Israel David Friedman, Greenblatt was one of the more high-profile US officials working to strengthen the US-Israel alliance, and helped change the way the American government speaks about settlements, checkpoints and other contentious issues related to the conflict.“It has been the honor of a lifetime to have worked in the White House for over two and a half years under the leadership of President Trump,” Greenblatt said in a statement. “I am incredibly grateful to have been part of a team that drafted a vision for peace. This vision has the potential to vastly improve the lives of millions of Israelis, Palestinians and others in the region.”Senior White House adviser Jared Kushner said that Greenblatt has done “a tremendous job leading the efforts to develop an economic and political vision for a long sought-after peace in the Middle East. His work has helped develop the relationships between Israel and its neighbors, as he is trusted and respected by all of the leaders throughout the region. He is a close friend and partner, and will continue to make a positive impact on the world.”Friedman said that it was a tremendous privilege to work with Friedman “on the critical tasks of repairing and strengthening the US-Israel relationship and seeking peace and stability within the Middle East. Jason has been a trusted friend and a valued colleague who has touched so many with his wisdom, sincerity, and goodwill. He has made an enormous and indelible contribution that we will seek to build upon as we move forward.”White House adviser Ivanka Trump said in a statement that “the kindness and unique talents of Jason Greenblatt, a dear friend and colleague, will be missed in the White House. We know he will continue to impact the world for the better.”