Source says Abbas is pressuring Hamas to cede its control of Gaza. 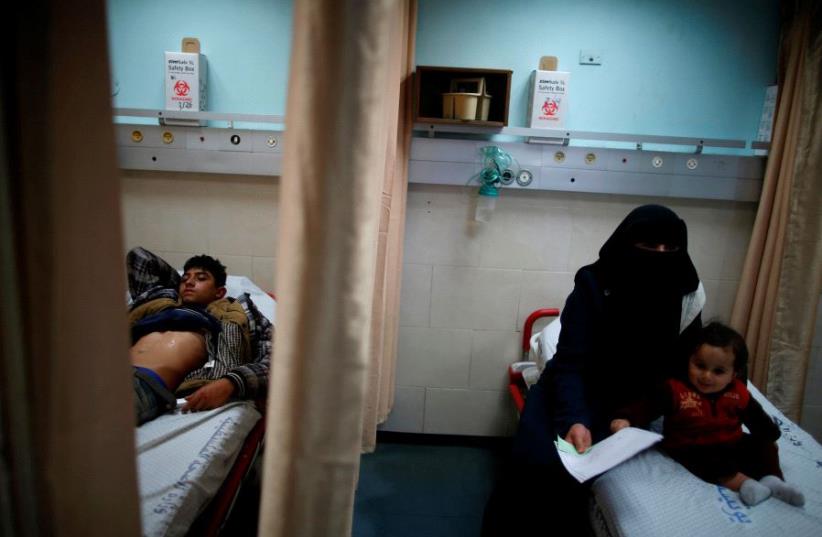 Palestinian boy Ahmed Abu Saman, 16, who was injured in a car accident, lies on a bed at the emergency department at Shifa hospital, Gaza's largest public medical facility, in Gaza City, March 29, 2017.
(photo credit: MOHAMMED SALEM/REUTERS)
Advertisement
The Palestinian Authority has not sent any shipments of medicine or medical equipment to the Gaza Strip for more than three months, causing severe shortages in the isolated territory, diplomatic sources say.“The PA has stopped sending medications and equipment,” one source who was not authorized to speak on the issue publicly, told The Jerusalem Post.“This has led to a number of major shortages.”According to Physicians for Human Rights Israel, Gazan hospitals are no longer able to obtain one-third of essential medicines and more than 270 medical equipment items needed for operating rooms.A second source who also was not authorized to discuss the matter publicly confirmed the first source’s account, adding: “This has placed the ill in a precarious state.”The PA Health Ministry is responsible for sending a number of important medications and medical equipment to Gaza. Private merchants also order such supplies for the strip.The second source added that he believes the PA has stopped the shipments as a part of PA President Mahmoud Abbas’s attempt to pressure Hamas to cede its control of Gaza.“Abbas is trying to force Hamas’s hand,” the source said. “I think it is a great mistake to attempt to achieve that end by stopping medical shipments.”Abbas has taken a number of steps to pressure Hamas in the past several weeks including significantly cutting the salaries of PA employees in Gaza and asking Israel to reduce the amount of electricity it supplies Gaza by approximately 35%. Israel approved Abbas’s request to reduce electricity earlier this week, a move that the UN says would be “catastrophic,” if implemented.A senior official at the PA Health Ministry denied the diplomatic sources’ statements.“There has been no change in delivering medication to Gaza,” the official said, speaking on the condition of anonymity.“We have not frozen our shipments.”The PA Health Ministry’s website has made no new announcements about shipments of medical supplies to Gaza since February 27.Another PA Health Ministry official declined to state whether or not the shipments have been stopped, while saying that there are plans to send vaccines to Gaza. Speaking on the condition of anonymity, the source did not elaborate on when they will arrive in Gaza.The first diplomatic source said he was aware the PA Health Ministry plans to send vaccines, but emphasized the current shortages “require the resumption of regular shipments of medications and medical equipment.”The Coordinator of Government Activities in the Territories, the branch of the Defense Ministry responsible for coordinating the entry of medications and medical equipment into Gaza, declined to comment.