For Orthodox Jewish women, tzniut, or modesty, involves wearing shirts that cover the collar bone and have three-quarter sleeves past the elbows. 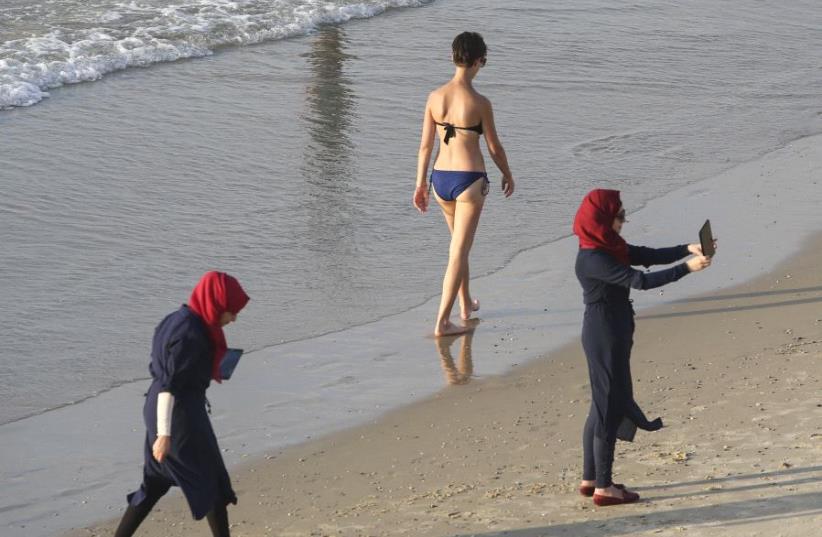 Arab women wearing burkinis at a beach in Tel Aviv
(photo credit: MARC ISRAEL SELLEM)
Advertisement
Summer is often synonymous with less clothing to cope with the summer heat. For religious women who dress according to modesty precepts, this is not an option. The warmer months pose the hurdle of staying cool while covering up – even more so in hotter regions such as the Middle East and North Africa (MENA).  For Orthodox Jewish women, tzniut, or modesty, involves wearing shirts that cover the collar bone and have three-quarter sleeves past the elbows. Their dresses or skirts have to be at least knee-length. In addition, married women cover their hair, either with a wig or a scarf called a sheitel.Religious Muslim women also wear a head scarf, commonly called the hijab, but which has different names throughout the MENA region depending on the style and country. They generally wear clothes that cover their entire body except the hands and face. Some observant Muslim women also wear a full-length robe over their clothes, sometimes called a jilbab. In other countries, a full-body robe called a chador (Iran) or burqa (Afghanistan) also covers the face.Bracha Ben-Haim, an Israeli clothing designer for Orthodox women, told The Media Line: “It can be so hot in summer and our clothing cannot be open…. I like the challenge.” For Ben-Haim, the type of material is key.“I think about the fabric a lot and how to be more comfortable in the summer,” she said. “I use a lot of cotton because the fabric doesn’t absorb the sun.”In addition to cotton – the material of choice for most women in the area – Ben-Haim uses certain types of Lycra.In mostly Arab East Jerusalem, Amina, who runs an embroidery store and declined to give her last name, said other popular alternatives include polyester and linen.Amina believes the world has the wrong impression of Muslim women because of how they dress.“They think that Muslim women don’t have freedom, that they don’t represent themselves. They believe her husband is forcing her to do things, like wearing a hijab. [But] I can go everywhere,” Amina told the Media Line.For the owner of the nearby New Style Store, who declined to give her name at all, summer fashion is preferred over winter fashion.
“In the summer, everything is better. The clothes are lighter, more colorful,” she told The Media Line.Like many other shops in the area, her store imports clothing from Turkey due to its proximity and the quality of the clothing available there. “It’s the closest hub for Arab clothing and the fabric is much better than in China,” she stated. While religious women wear specific clothing that is appropriate for the summer weather, being modest can still be uncomfortable.
“I wear flowy clothes like bell skirts,” Li-or Cohen, a Jerusalem resident, told The Media Line. “Sometimes it’s hot, but air conditioning helps.” Riham Rajabi and Sudqia Nassaw, employees at the Banateen Boutique in East Jerusalem, told The Media Line that they were used to the heat, adding that one way they cool off is by taking cold showers. But according to co-worker Riham Ayyabi, there is nothing they can really do to gain relief from the hot Middle Eastern summers.“We dress this way because we are Muslim, not as a fashion statement,” she said. For some religious women, being too warm is an afterthought. Jerusalemite Rivka Berger told The Media Line: “God wants me to [dress modestly]. It’s not really a question of whether it’s comfortable.”In West Jerusalem, Yocheved Druke told The Media Line: “Now it’s hot for everyone. Physically it’s not a big deal… when you know why you’re doing it spiritually.”   With no end in sight to the Palestinian-Israeli conflict, religious Muslim and Jewish women can find at least some common ground in trying to stay cool while still dressing with modesty.For more content on the Middle East, visit the themedialine.org.