Tel Aviv gets one third of yearly rainfall in a week; unseasonable cold to continue, snow expected on Mount Hermon. 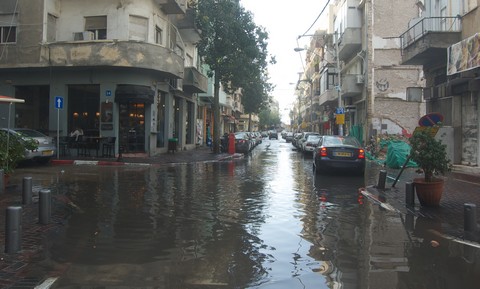 The first snow on Mount Hermon had not yet been seen as of Saturday, but snow was expected with the unseasonable cold continuing. Hail, which fell on Wednesday evening in Jerusalem, was also a possibility in other parts of the country.RELATED:
TA says drainage system good as rain floods streetsThe Israel Meteorological Service warned that swimming in the Mediterranean Sea remained dangerous due to high waves. There was also a risk of flash floods in the Judean Desert and Jordan Valley, as well as along the coast in low-lying areas.Temperatures were expected to rise slightly on Monday with isolated rain continuing until noon.
Advertisement
Subscribe for our daily newsletter