By JEREMY SHARON, MELANIE LIDMAN
DECEMBER 31, 2011 22:36
Haredi protesters in J'lem wear yellow Star of David 311
(photo credit: Marc Israel Sellem)
Advertisement
Approximately 1,500 ultra-Orthodox men gathered at Shabbat Square in the capital’s Geula neighborhood on Saturday night to protest what they called the “oppression” and “incitement” of the “secular community” against them.Dozens of men wore yellow Stars of David on their jackets with the word “Jude” in the center, and banners bearing slogans such as “Zionists are not Jews” and “Zionism is racism” were paraded at the rally.“Orthodox Jews demand the presence of international forces to protect them,” another sign read.Police arrested two protesters when dozens tried to block Bar-Ilan Street and throw stones. Police dispersed the crowd.RELATED:
'Haredi attack on girl nauseating, disgusting’
Police planning crackdown on Beit Shemesh radicalsPublic attention focused on the ultra-Orthodox community last week following a documentary that Channel 2 broadcast, highlighting abuse that haredi extremists were directing at national-religious schoolgirls in Beit Shemesh.At Saturday night’s demonstration, young children were brought onto a stage erected in front of the square, wearing black-and-white-striped clothes and bearing the yellow Stars of David on their lapels. 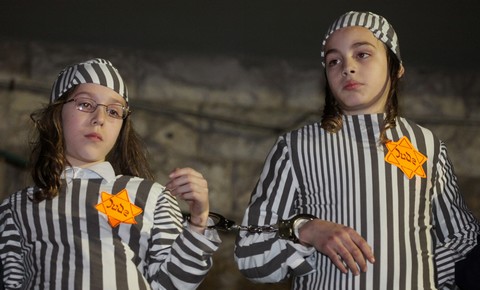 Ultra-Orthodox demonstrators in Jerusalem wear yellow stars to protest incitement against them (Marc Israel Sellem)“What’s happening is exactly like what happened in Germany,” said one man wearing a yellow star, who gave his name only as Moishe. “It started with incitement and continued to different types of oppression. Is it insulting that we wear these stars? Absolutely, and it hurts people to see this, but this is how we feel at the moment, we feel we are being prevented from observing the Torah in the manner in which we wish.”The protest was also called in support of Shmuel Weisfish, an activist in the ultra-Orthodox extremist group known as the Sikrikim (Sicarii), who was convicted of assault and other offenses and will begin a two-year prison sentence on Sunday. 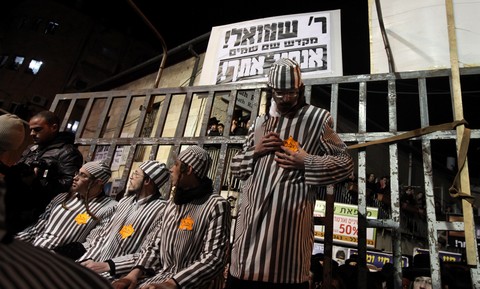 Ultra-Orthodox demonstrators in Jerusalem wear yellow stars to protest incitement against them (Marc Israel Sellem)Directives from the stage urged protesters not to speak with the press, and at one point men gathered around a camera crew in an attempt to force them to wear yellow stars.The crew retreated to a police cordon.Angry crowds also followed uniformed police, shouting at them and calling them “Nazis.”“It’s like how it started with the Nazis – very slowly,” American yeshiva student Salomon Hoberman said, defending the use of the yellow stars.“They’re separating us from the Jewish people because we’re following the way of the Torah. They hate us because we’re going the Jewish way.And there’s only one Jewish way.” 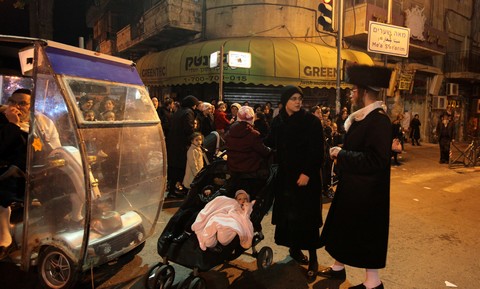 Ultra-Orthodox protesters demonstrate in Jerusalem (Marc Israel Sellem)A haredi woman, who declined to give her name, said, “We didn’t come to demonstrate, we came to show our power, and that our power is forever.”The sentiments that several of the protesters expressed to The Jerusalem Post bore a central theme of religious coercion against the ultra-Orthodox community.“How can this country be called a democracy when they are trying to force us to adopt their culture and their standards?” asked Shimon Levy, a young haredi man from a veteran Jerusalem family. “We were here before the state [was established] and yet there are people telling us what we may and may not do in our own neighborhoods.”He asserted that “the hatred and incitement being directed at us because we do not want to take on the ethical standards of the secular [community] is simply intolerable.”Opposition leader Tzipi Livni on Saturday night criticized the haredi protesters for wearing yellow stars during the protest."With all due respect to the right of groups in the haredi community to protest, and that is their elementary right, to put a yellow star on their children does serious injury to the memory of those killed in the Holocaust," Livni stated."I hope that the heads of the haredi public condemn these acts, because they hurt the common cause that all of us still share," she added. 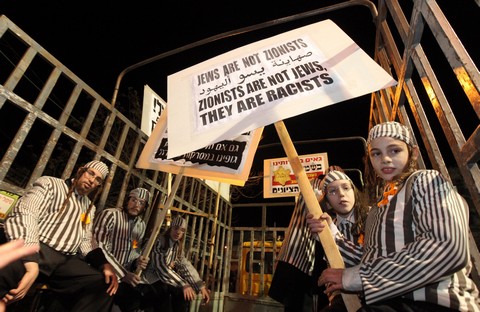 Haredi protesters in Jerusalem (Marc Israel Sellem)Meanwhile, Shas spiritual leader Rabbi Ovadia Yosef on Saturday addressed tensions between secular and haredi communities in Israel, saying in his weekly sermon, "We do not hate the secular people, but rather love them, we bring them closer."Yosef spoke out against extremism, stating that "there are haredim carrying out forbidden acts, that our Torah forbids, they must be denounced."Jpost.com staff contributed to this report.