The Iranian media, which has been known to report "conspiracy theories" in the past, runs story refuting that Kerry was hurt in a cycling accident. 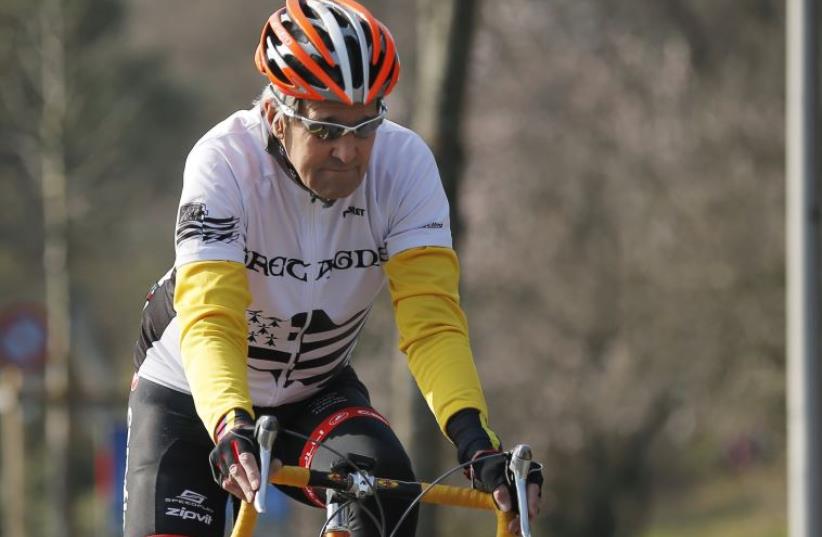 United States Secretary of State John Kerry rides his bicycle along the shore of Lake Geneva
(photo credit: REUTERS)
Advertisement
Iranian media erupted on Wednesday with an unsubstantiated rumor that US Secretary of State John Kerry was not injured earlier this week in a simple fall from his bicycle in Switzerland, but rather he was the target of an assassination attempt while meeting with Islamic State terrorists.The Iranian media has been known to report "conspiracy theories" in the past, such as a September report that Israel was spearheading a dangerous global plot to spread the Krav Maga martial art worldwide and a December report that Israel was building settlements in Iraq.The latest Iranian report, first published by the Nasim news agency and subsequently picked up by dozens of Iranian news sites, based its information on "an American news website" which cites a Russian foreign intelligence service report as the source of the information.According to the report in Nasim, Kerry secretly met with one of the leaders of Islamic State on Sunday. The meeting eventually led to an armed clash and an attempt to assassinate the US secretary of state.Kerry's meeting, in which the alleged assassination attempt took place, was with Gulmurod Khalimov, a senior Tajik police commander, trained in the United States, who announced his defection to Islamic State in a video released last week, the report states.Having received training from the US State Department previously, Khalimov was well aware of State Department security procedures and he used the knowledge to get another member of his entourage into the secret meeting with Kerry, with the intention of assassinating him, the report claims.The report cited communications intercepted by Russian intelligence from France, the US and Switzerland as confirming that two other people were shot in the incident, one of them fatally.The story of Kerry breaking his femur in a bicycle accident in Switzerland was then concoted to hide the real source of his "grave injuries," according to the report.