Mother of Naftali Fraenkel: We will have to learn to sing without you

Rachel Fraenkel commemorates son who knew who to pray, who loved music and who lived a life filled with love.

By TOVAH LAZAROFF
The Fraenkel family at the funeral for their slain son Naftali, July 1, 2014.
(photo credit: TOVAH LAZAROFF)
Advertisement 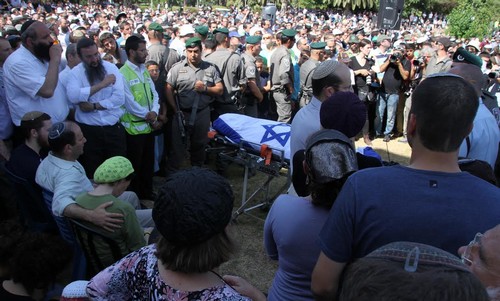 “We will have to learn to sing without you,” Rachel Fraenkel said to her slain son Naftali, 16, as she looked out at his flag-draped body, which lay on top of a gurney in front of thousand of mourners.She spoke as the afternoon sun beat down on the large, green lawn edged with palm trees, where it was standing room only.It was from here, her home community of Nof Ayalon, that her son Naftali typically headed to his high school, the Mekor Chaim Yeshiva in the Gush Etzion region. And it was to his home in Nof Ayalon that Naftali was headed when he was abducted with Gil-Ad Shaer and Eyal Yifrah on June 12 by Hamas terrorists from a hitchhiking post outside his school.For 18 days, the families of the three teens, along with thousand of others, prayed for the safe return of the boys, whose bodies were found on Monday night under a pile of rocks just outside Hebron. Prayer is worthy, both before one’s fate is decreed and after, Rachel Fraenkel said. But, she added, “You can not always change a decree. For us it was too late.”As she spoke, her voice nearly broke down in tears, but almost immediately she steadied herself. The act of prayer is worthy, no matter what the outcome, she said.“Each prayer has its own work to do. There is no senseless act of love and charity. A good act stands on its own,” she said. “Everyone says you are now children of the world to come,” she said of her son and the two other teens. “But we had hoped you would have many years in this world.”In describing the teens’ abductors, she said that “they had gone out to hunt.”God, she said, chose these three boys who were filled with goodness and love as the “poster children” who highlight how different they were from their murderers.She described her son as an amazing, happy boy, who was both cynical and innocent.She spoke of a teenager who knew to pray, who loved music and who lived a life filled with love.Naftali’s father, Avi, added that his son was both mischievous and mature, the kind of child who knew exactly what he wanted.Avi said that he had written most of the words he was about to say between Sunday and Monday two weeks ago while the search was still ongoing and Naftali’s fate was unknown.“Now I know, that was three days after you were killed. Since then the pages have been in my pants’ pocket the all the time. When I changed pants, I would get nervous that I had lost them, I would get nervous, but then I would find them and calm down,” he said.“I felt that even if you were no longer with us in body, your presence is with me all the time,” Avi said.But it was clear to him, he said, that the three teens were killed on their way home from school only because they were Jewish.“So you join the millions throughout our history who have been killed for the same reason, from [Mishnaic sage] Rabbi Akiva to [police officer] Baruch Mizrahi,” he said.But unlike the past, Jews now have a nation and that nation felt connected to the fate of the three teens in an unprecedented way, Avi said.To his son, he said, “I do not know why you were taken from us so young,” adding, “but your death has propelled us forward and there is comfort in that.”Rachel said that throughout the 18-day ordeal she had felt blessed by her family and her community.She thanked the security forces for finding her son’s body and returning him to her, as they promised they would do. “This is an act of kindness, it was not clear that this would happen,” she said. To her son, she said, “Rest in peace. We will always, always, hear your voice within us.”