Journalists threatened by Hamas for reporting use of human shields

By LAHAV HARKOV
Twitter [Illustrative]
(photo credit: REUTERS)
Advertisement
The international press in Gaza has hardly reported on how Hamas has operated in this round of fighting, and photos or video of Hamas fighters from recent weeks are rare.The reason became apparent this week as several journalists reported being threatened and even expelled from Gaza for highlighting that the terrorist organization used civilian sites to attack Israel.Reporters from Italy and the US corroborated the IDF’s explanation for explosions near the Shifa Hospital in Gaza City and by a playground in the nearby Shati refugee camp on Tuesday – that it was the result of misfired rockets by Gazan terrorists.One altered his report, however and another waited to leave Gaza, because he feared retribution from Hamas. Italian journalist Gabriele Barbati tweeted a photo on Tuesday as he went through the Erez crossing into Israel. 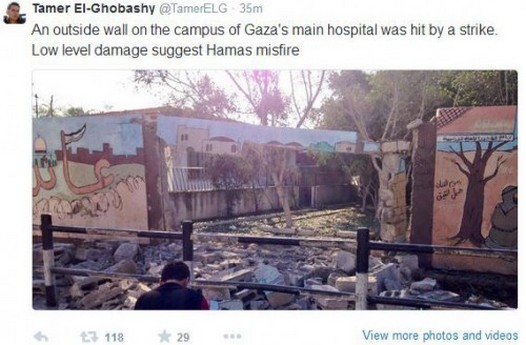 Barbati then tweeted the following in Italian and English: “Out of Gaza far from Hamas retaliation: Misfired rocket killed children [yesterday] in Shati.Witness: militants rushed and cleared debris.”He followed that tweet with another: “@IDFSpokesperson said truth in communique released yesterday about Shati camp massacre. It was not Israel behind it.”The Wall Street Journal’s Middle East correspondent based in Egypt, Tamer El-Ghobashy, tweeted a photo of rubble with the explanation: “An outside wall on the campus of Gaza’s main hospital was hit by a strike. Low level damage suggest Hamas misfire.”Soon after, El-Ghobashy deleted the tweet, similar to his Wall Street Journal colleague Nick Casey, who tweeted a photo of a Hamas official using Shifa Hospital for media appearances last week and then deleted it.El-Ghobashy then replaced the tweet with the same photo and the text: “The outer wall of Gaza City’s main hospital was struck. Unclear what the origin of the projectile is.”He wrote that he deleted the first tweet because it was speculative. However, he presumed that the IDF struck a UN school in Beit Hanun a week earlier, which the IDF Spokesman’s Office denied – and did not delete that tweet.The French newspaper Liberation published an article last week which detailed how Hamas interrogated French-Palestinian journalist Radjaa Abu Dagga and threatened to throw him out of Gaza – all at Shifa. The article was later removed at Abu Dagga’s request.They interrogated Abu Dagga and insisted that he worked for the Palestinian Authority in Ramallah, even though he said he worked for French media and an Algerian radio station. He was instructed to immediately leave Gaza without his papers.Pro-Palestinian activists and journalists, including Fadi Arouri from Al-Ayyam, reported on Wednesday that RT (formerly Russia Today) correspondent Harry Fear was told to leave Gaza after he tweeted that Hamas fired rockets into Israel from near his hotel.In another tweet from July 17, Fear wrote, "Al-Wafa hospital has been hit in the last while; injuries reported — this is the hospital with human shields. #GazaUnderAttack."Fear later asked to clarify that he was referring to pro-Palestinian activists acting as voluntary human shields.

These expulsions only work when Hamas allows journalists to leave Gaza. Last week, Huffington Post Middle East correspondent Sophia Jones tweeted: “The Israeli side of the border with Gaza was briefly open today, but Hamas did not let journalists leave Gaza.”Foreign Ministry spokesman Paul Hirschson said the Israeli government is aware of the phenomenon but does not know how widespread it is.He said that, while he does not expect reporters to put themselves directly in the line of fire, danger “comes with the turf” for conflict reporters, and “it is inconceivable that there is zero visual footage of Hamas, as if they don’t exist.”On the Israeli side, Hirschson said: “The Foreign Ministry in particular, but the IDF Spokesman as well, have been very open and loud in our insistence that foreign media should be let into Gaza.Years ago the army wouldn’t let them in because it’s dangerous, but now we say ‘they’re adults, they know it’s dangerous and this is their job.’