An airport in Gaza, for the benefit of all

I imagine some readers might react negatively to the mere idea, since I’m talking about Gaza and the United Nations, two contentious topics for many Jews both in Israel and the US. 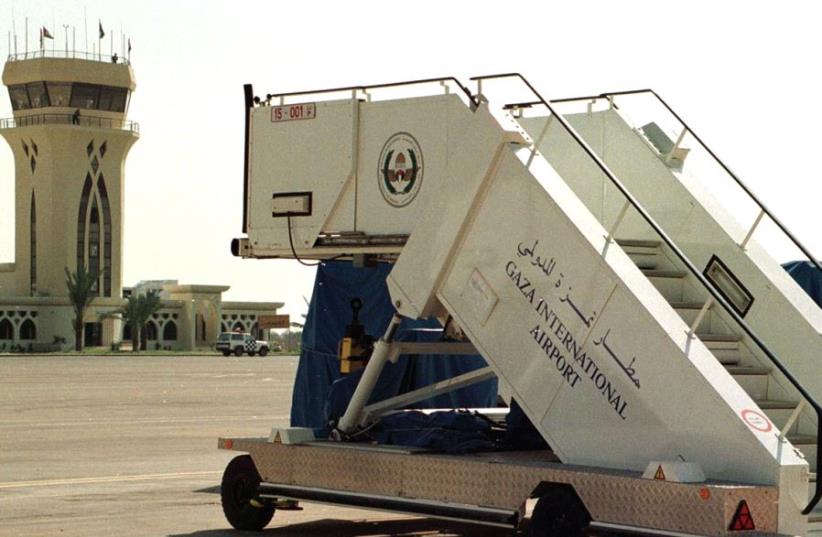 A MOBILE stairway at Gaza’s airport in 1998
(photo credit: REUTERS)
Advertisement
I have a dream, one I’m working tirelessly to turn into a reality: to establish a UN-operated humanitarian airport for the civilian population in Gaza.I imagine some readers might react negatively to the mere idea, since I’m talking about Gaza and the United Nations, two contentious topics for many Jews both in Israel and the US. But I urge you to seriously consider the ambitious proposal put forward by Project Unified Assistance, the nonprofit organization I started last year to make my dream a reality.As a US citizen from Gaza, I experienced firsthand the consequences of closing the Strip off from the world. In the summer of 2006, I flew to Egypt from the United States after completing a year-long exchange program sponsored by the US State Department. Due to the abduction of Israeli soldier Gilad Schalit, Gaza’s border with Egypt was shut and the European Union’s Border Assistance Mission ceased operating the Rafah crossing, the only crossing for Palestinians in Gaza not administered by Israel.I remained in Egypt for months with no prospect of returning home to Gaza. That being the case, I returned to the US and settled in the Bay Area, where I continued my education, received political asylum and began my professional career. My successful journey in the US was made possible by the support of generous and sincere individuals, including Jews.I have had opportunities to connect with individuals who are passionate supporters of Israel, and have come to understand why they view Gaza negatively. I realize that currently, and for understandable reasons, many American Jews who are strong supporters of Israel believe all Gazans are Hamas supporters, which is not the case. Many believe improvements to Gaza’s situation must be conditioned upon the removal of Hamas.That said, I believe Hamas is there to stay and, in turn, likely to control the Strip for a long time to come.While this may be frightening to many, imagine how people in Gaza feel knowing that regardless of their politics, feelings and aspirations, their future will continue to be encompassed by poverty and riddled with violence. As long as Hamas is in power, Israel will continue to deny many needed improvements in the Strip.However, it would be a strategic, diplomatic, humanitarian and ethical disaster to maintain the status quo for Gaza’s civilians, regardless of who controls the territory.Some Israeli generals and security experts, such as military intelligence chief Maj. Gen. Herzl Halevi, have advocated easing the restrictions on the Strip.Halevi stated last year, “The humanitarian condition in Gaza is progressively deteriorating, and if it blows up, it will be in Israel’s direction.”The airport I propose is one project that can preserve Israel’s legitimate security needs, improve the lives of Gaza’s civilians and prevent Hamas from benefiting materially, financially or symbolically.Airport security would be conducted and maintained by the UN through specialized task forces via an arrangement similar to that utilized by the EUBAM at the Rafah border crossing or the one currently being deployed by the UN Interim Force in southern Lebanon.More than 10 years of severely limited movement and access have created an untenable situation for the more than 1.8 million Palestinians who live in Gaza.A humanitarian airport in Gaza would help accelerate redevelopment and would relieve the inability of Gazans to travel freely. It would also provide a creative solution to sustainable peace in the Strip.The UN successfully conducts humanitarian aerial operations in other countries impacted by conflict, and it would not be difficult to replicate such missions in Gaza.We should be deeply concerned that hundreds of thousands of Gaza youth are growing up in such dire humanitarian circumstances. This makes the Strip’s children extremely vulnerable to radicalization and to violent tendencies, which would further harm Israel’s long-term security.There isn’t much time left to reverse the ongoing humanitarian disaster in Gaza. Improving the situation there would be good for its residents, for Israel and for the region. A humanitarian airport is a good place to start, and now is a great time.The author is a naturalized US citizen from the Gaza Strip. A graduate of the University of San Francisco, he lives in the Bay Area. This op-ed was reprinted with permission from J. The Jewish News of Northern California (jweekly.com).