Civil society in the whirlpool of terror

Needless to say, any connection between NGOs claiming to promote human rights and internationally- recognized terrorist groups is an inherent contradiction. 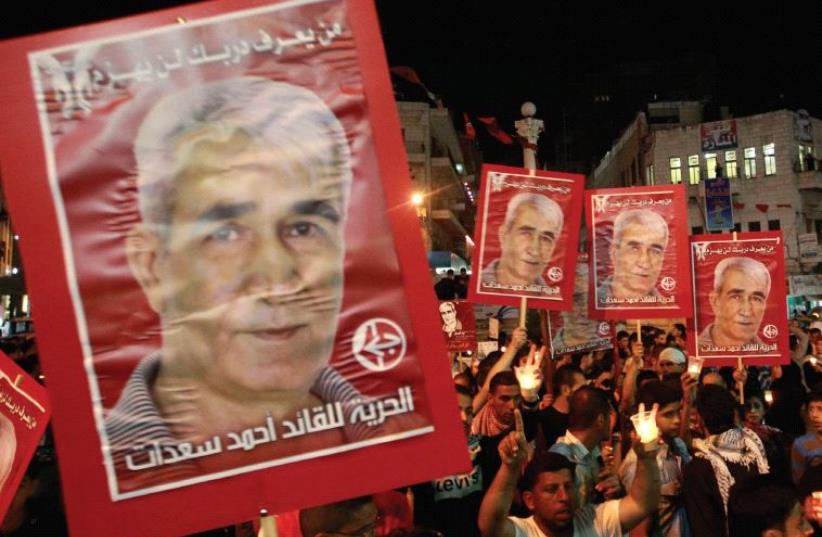 PALESTINIANS HOLD portraits of Ahmed Saadat, leader of the Popular Front for the Liberation of Palestine (PFLP), in Ramallah in 2012
(photo credit: REUTERS)
Advertisement
Non-governmental organizations (NGOs) have become an important and irreplaceable part of political discourse in Europe, with their work often seen as complementary to that of governments in shaping and implementing policy. While government officials are subject to a strict set of legal boundaries and are held responsible by their constituencies, civil society operates beyond such boundaries and is free to act as it sees fit.The abuse of these civil society organizations in conflict zones is a constant global concern. NGOs face significant challenges in achieving their humanitarian goals in areas controlled by terrorist organizations.Further, NGOs themselves face the danger of infiltration by terrorist groups seeking to exploit their resources, as allegedly occurred with World Vision in Gaza (discussed below). In other instances, terrorist groups establish new NGOs to gain both political legitimacy and access to public resources.A newly released report by NGO Monitor shows that some organizations funded by European countries and the EU are directly affiliated with the Popular Front for the Liberation of Palestine (PFLP), while others have indirect links vis-à-vis a substantial presence of employees and officials linked to the PFLP.The PFLP is designated as a terrorist organization by the US, EU, Canada and Israel. Since its creation in 1967 it has been involved in suicide bombings, hijackings and assassinations, among other terrorist activities targeting civilians.The latest report shows that certain NGOs were established by the PFLP itself, with some officials and staffers convicted of terrorism charges by Israeli courts. In several cases these individuals have been denied entry and exit visas by Israeli (and Jordanian) authorities due to security concerns. A significant number of these NGO officials hold multiple positions in various organizations, indicating the close relationships between these groups.One example is the NGO Addameer, which is an official PFLP “affiliate.”The organization’s chairperson and co-founder, Abdul-latif Ghaith, was banned by Israel from traveling internationally and banned from entering the West Bank from 2011 to 2015 due to his alleged membership in the PFLP. Ghaith was described in an article posted by Miftah (another Palestinian NGO) as a representative of the PFLP. The report also demonstrates that Addameer’s vice chair Khalida Jarrar, Addameer board member Yousef Habash, and Addameer researcher Ayman Nasser have direct ties to the PFLP. Addameer is funded by the governments of Sweden, Switzerland, Denmark, the Netherlands, Norway, UK, Ireland, the UN, France and Spain.Another example is the Union of Health Work Committees (UHWC), a “Palestinian health and development non-governmental, health, grass-rooted, non-profit organization,” active in Gaza. In practice, UHWC is a PFLP-affiliated health committee, identified as such by USAID and Palestinian documentation.Dr. Majed Nassar, deputy director of UHWC, has been prevented from traveling since 2001, a decision upheld by the High Court in Jerusalem.Dr. Rabah Muhanna, “member of the Political Bureau of the PFLP and leader of its branch in Gaza,” was head of the UHWC (2001) and is one of the organization’s founders.Funders of UHWC include the governments of Spain and Sweden.In total, the report describes eight NGOs that are funded by the governments of Sweden, Denmark, Spain, Germany, EU, Norway, Ireland, UK, the Netherlands, Belgium, France and Switzerland.Needless to say, any connection between NGOs claiming to promote human rights and internationally- recognized terrorist groups is an inherent contradiction and one that should not be tolerated by the international community. Moreover, the risks of such affiliations are immense. A case in point is World Vision’s work in Gaza.The Israeli Security Agency (Shin Bet) announced in August 2016 that Mohammad Halabi, manager of World Vision operations in Gaza, had funneled 60% of World Vision’s Gaza budget to the Hamas terrorist group. Consequently, the governments of Australia, Germany and the UK froze donations to World Vision pending the results of an investigation into these serious allegations.This was a necessary and welcomed first response, but more needs to be done to ensure that NGOs are not hijacked by terror affiliates.Governments around the globe should join forces in addressing this disturbing phenomenon, as is needed given the revelation that NGOs with ties to the PFLP are recipients of European funding. Transparency and accountability on part of both NGOs and their donors are essential, as are regulations that will prevent future misuse and misconduct.The author is director of the Europe desk at NGO Monitor.