Snow doesn’t seem to deter the small local community of Subbotnik Jews from faithfully trudging to their modest synagogue, where they continue to turn their hearts and their hopes toward Zion. 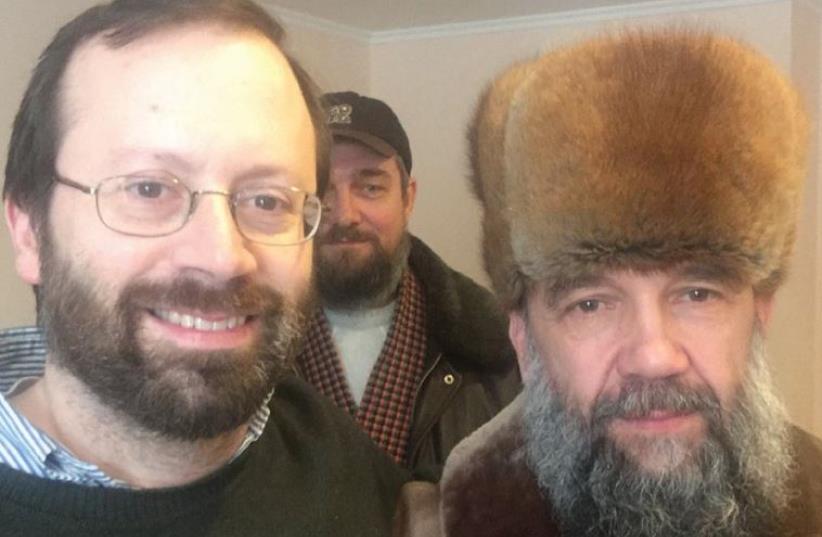 THE AUTHOR with a member of the community.
(photo credit: MICHAEL FREUND)
Advertisement
Last week, amid subfreezing temperatures in a Ukrainian city founded by Cossacks, I saw living proof that the Jewish spark can truly burn brightly even under the most unlikely circumstances.Indeed, while the snow in Krivoi Rog may be kneedeep, blocking roads and turning thoroughfares into slippery escapades, that doesn’t seem to deter the small local community of Subbotnik Jews from faithfully trudging to their modest synagogue, where they continue to turn their hearts and their hopes toward Zion.Rivka, a young member of the community, is a student of architecture at the local university who has taught herself to speak Hebrew. When I asked her how she envisions her future, she said, “I want to live in Israel so that with God’s help I can have a Jewish wedding and educate my children in the spirit of Torah. This is very important to me.”Andrei, who is 19, told me that his dream is to serve in the IDF.“I believe that doing so is a mitzva and that defending the Land of Israel is something sacred,” he said.The 200-year-old saga of the Subbotnik Jews is one laced with tragedy and persecution, but characterized by tenacity and resolve, and it is time for Israel to reward their fidelity and bring these precious people home.The Subbotniks’ origins trace back to southern Russia in the late 18th and early 19th centuries, when Judaizing sects arose for reasons that various scholars have struggled to explain. According to Czarist archives and Russian church documents of the time, the movement spread rapidly and grew to number in the tens of thousands.While remaining Christians, many adherents took on some Jewish practices, such as observing the “Subbot,” or Sabbath, on Saturdays, leading them to be referred to as “Subbotniks.”Among them, however, was a small group which left behind the Russian Orthodox faith and underwent conversion to Judaism.They referred to themselves as the “Gerim,” using the Hebrew word for converts, and began to practice Judaism openly, which in Czarist Russia was no small feat.These Subbotnik Jews observed Jewish law, married Russian Ashkenazi Jews in the city of Voronezh, and some sent their children to learn in yeshivot in Lithuania and the Ukraine.Their embrace of Judaism did not go unnoticed, and the Russian regime wasted little time in trying to destroy the movement.According to the late Simon Dubnow, the great historian of Russian and Polish Jewry, Czar Alexander I learned of the existence of the Subbotnik Jews in 1817, when they petitioned him to complain about the anti-Semitism they were suffering “on account of their confessing the law of Moses.”Rather than protecting his subjects, the Czar chose to persecute them. He issued a series of cruel decrees against the Subbotnik Jews, which included kidnapping their children, and which culminated in their deportation to the far reaches of eastern Siberia.Over time, many migrated back, settling again in southern Russia or the Ukraine while valiantly trying to preserve their identity in the face of Czarist and later Soviet oppression.In the 1920s, the sixth Lubavitcher Rebbe, Rabbi Yosef Yitzchak Schneersohn, sent an emissary named Rabbi Chaim Lieberman to live and work with the community. He established a kosher slaughterhouse as well as a tallit, or prayer shawl, factory, which were manned by Subbotnik Jews and which serviced Jewish communities throughout Russia. They operated until Rabbi Lieberman was arrested and murdered by the Communists in 1937 for his promotion of Judaism.When the Germans invaded the Soviet Union during World War Two, they slaughtered many Subbotnik Jews on account of their Jewishness, including some of those living in Krivoi Rog, where the community had been formally established in 1927.Subsequently, in the dark days of Stalinist Russia, Subbotnik Jewish men in Krivoi Rog were arrested for praying together in a minyan and keeping Bibles at home, and were shipped off to the Siberian gulag for periods ranging from eight to 10 years.Decades of living under Communism took their toll, with the community in Krivoi Rog now consisting of 40 people, with dozens more in nearby towns.Altogether, there are an estimated 15,000 to 20,000 Subbotnik Jews spread throughout the former Soviet Union, many of whom wish to make aliya.For nearly a century, the Subbotnik Jews were freely immigrating to Israel, until in 2005 the Jewish state’s vaunted bureaucracy shut down their aliya.Prominent figures in our nation’s modern history, such as the late IDF chief of staff Rafael Eitan and the legendary Alexander Zaid, a pioneer of the Second Aliya who founded the “Hashomer” Jewish self-defense group a century ago, were of Subbotnik Jewish descent. So too was Yossi Korakin, a legendary commander in Israel’s vaunted special operations naval unit Shayetet 13, who died during a counter- terrorism operation against Hezbollah in Lebanon in September 1997.There is no reason to think that the Subbotnik Jews will not continue to provide Israel with more heroes in the future, if given the chance to do so.In fact, many of the Subbotnik Jews of Russia and the Ukraine, including those whom I visited in Krivoi Rog, have relatives and loved ones already living in Israel, but have been unable to reunite with them.With each day that passes, the danger of assimilation continues to mount, which is why it is critical that Israel move quickly to allow the remaining Subbotnik Jews to make aliya.There are various halachic issues that will need to be addressed in light of the community’s unique history and in order to remove any doubt regarding their personal status, as well as bureaucratic obstacles that will also need to be overcome. Hopefully, this will happen soon.Through stubborn dedication and determination, the Subbotnik Jews have somehow managed to keep the flame of Jewish life alive despite everything they have endured. Israel should now bring home the remaining Subbotnik Jews of Russia and the Ukraine to ensure that heroic blaze is never extinguished.The writer is founder and Chairman of Shavei Israel (www.shavei.org), which assists lost tribes and other hidden Jewish communities to return to Israel and the Jewish people.