Fundamentally Freund: Recalling the menace of May 1967

The Jewish state owes no one an apology for facing down its foes and taking the territory which those very same enemies used as a platform from which to seek our destruction. 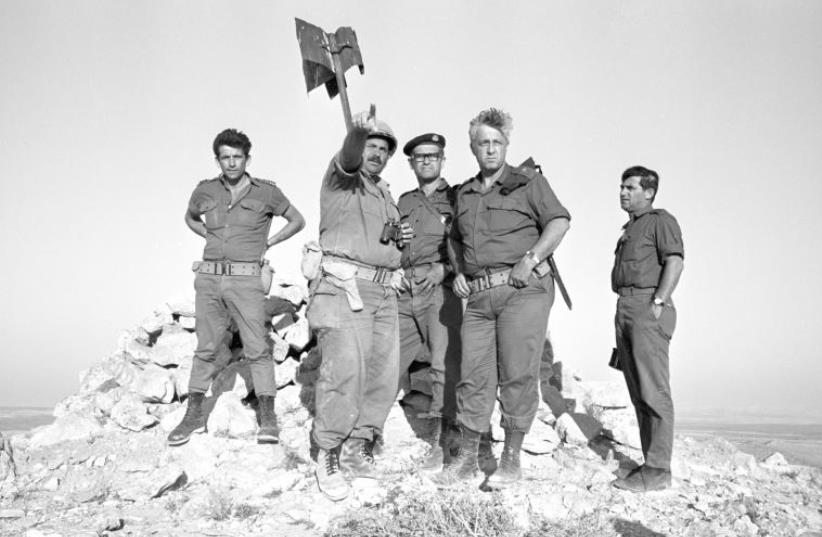 The Six-Day War
(photo credit: IDF ARCHIVES, MINISTRY OF DEFENCE‏)
Advertisement
As the nation prepares to celebrate the 50th anniversary of the reunification of Jerusalem and the liberation of Judea, Samaria and the Golan Heights, it is perhaps only natural that our focus is primarily on the miraculous outcome of the June 1967 Six Day War. After 1,900 years of yearning, the Jewish people were at last reunited with the heart of our ancestral homeland, when Divine providence granted Israel a resounding victory over our adversaries.For the first time since the Roman legions under Titus set Jerusalem aflame, holy places such as the Temple Mount, Shiloh and Hebron were once again under full Jewish sovereignty and control.It was a victory for the ages, a turning point in history that reshaped Jewish destiny, as the dreams of our ancestors were transformed into reality, and Jews could once again live and play, worship and work, in the hills of Judea, the vineyards of Samaria and the stone-paved alleyways of Jerusalem.But amid the festivities, it is no less important to recall the events of May 1967, when the menace of destruction hung heavily over the nation as our neighbors vowed to finish off the youthful Jewish state.Particularly now, when the Palestinians and their supporters have succeeded in poisoning historical truth with fantasy and falsehood, a glimpse back at what took place prior to the war will serve to undercut the false narrative now being put forth by our foes.For starters, bear in mind that in May 1967, there was no Israeli “occupation,” no Jewish “settlements” and no “Judaization” of Jerusalem. Nonetheless, there was plenty of Arab animosity, as the airwaves filled with chilling threats to throw the Jews into the sea.On May 8, 1967, Syria’s information minister, Mahmoud Zuabi, openly declared that his country would soon wage “more severe battles until Palestine is liberated and the Zionist presence is ended.”Eight days later, on May 16, Cairo radio chimed in, announcing that, “The existence of Israel has continued too long... We welcome the battle we have long awaited. The peak hour has come. The battle has come in which we shall destroy Israel.”In case anyone had failed to understand their message, the following day Cairo radio was even more blunt: “All Egypt is now prepared to plunge into total war which will put an end to Israel.”Amid these threats, Egyptian dictator Gamal Abdel Nasser took concrete steps to prepare for genocide against the Jewish state, doubling the number of Egyptian troops in Sinai and deploying hundreds of tanks near Israel’s southern border. Nasser then demanded that the 3,400-man United Nations Emergency Force, which had been deployed in Gaza and the Sinai for a decade to prevent conflict, be immediately withdrawn.Less than a week later, on May 22, the UN did just that, cowardly abandoning its posts, thereby setting the stage for an Egyptian invasion.Egypt’s Voice of the Arabs radio broadcast gleefully celebrated the UN’s retreat, announcing that, “There is no life, no peace nor hope for the gangs of Zionism to remain in the occupied land. As of today, there no longer exists an international emergency force to protect Israel... The sole method we shall apply against Israel is a total war which will result in the extermination of Zionist existence.”With the departure of the UN, Nasser proceeded to close the Straits of Tiran to Israeli shipping, an act that 10 years previously, in 1957, US president Dwight D. Eisenhower had said would be considered an act of war.On May 25, Syria, Jordan, Iraq and Saudi Arabia moved troops to Israel’s borders, encircling the Jewish state like vultures preparing to swoop down on their prey.Six days later, Iraqi president Abdel-Rahman Aref minced no words in explaining why his country was sending soldiers to the area, asserting that, “The existence of Israel is an error which must be rectified. This is our opportunity to wipe out the ignominy which has been with us since 1948. Our goal is clear – to wipe Israel off the map.”Meanwhile, the PLO, which was founded in 1964, was also gearing up for war. Asked in an interview what would happen to Israel’s Jews in case of war, PLO founder Ahmed Shukairy glibly stated on June 1 that, “Those who survive will remain in Palestine. I estimate that none of them will survive.”Four days later, war broke out and the rest is history.Or is it? Despite the circumstances, which clearly demonstrate that Israel was engaged in an existential war of self-defense in the Six Day War, much of the international community today falsely portrays the Jewish state’s acquisition of territory in 1967 as an act of aggression or “occupation.”Worse yet, they play along with the Palestinian fairy tale that the Arab-Israeli conflict is all about Jerusalem, Judea and Samaria, when in fact, as the events of May 1967 show, the real underlying cause is the refusal of the Arabs to accept a permanent Jewish presence in the region.So as we rejoice in remembering Israel’s glorious victory five decades ago, let us redouble our efforts to remind the world of the simple truth that many do not wish to see. The prelude to the 1967 war is a critical part of the story, one that lends some much-needed clarity and context to the events that would follow.Simply put, the Jewish state owes no one an apology for facing down its foes and taking the territory which those very same enemies used as a platform from which to seek our destruction.Israel’s presence in Jerusalem, Judea and Samaria is historically just, morally fitting, biblically mandated and militarily necessary to ensure our survival. And we shall remain in these areas until the end of time, whether the world likes it or not.