“The genetic record, now suggests that conversos – or people who shared ancestry with them – came to the Americas in disproportionate numbers”. 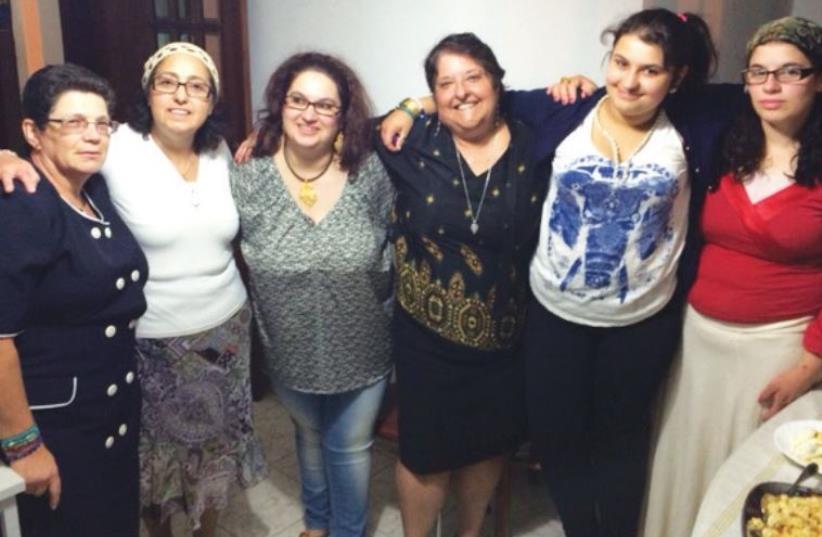 Genie Milgrom (third from right) at a melaveh malka with returning Anusim in the village of Belmonte, Portugal, last year
(photo credit: Courtesy)
Advertisement
In recent years, as a growing number of Bnei Anusim, descendants of Spanish and Portuguese Jews forcibly converted centuries ago, have begun to return to our people, there has been much speculation about the potential scope of the phenomenon in Central and South America. But now, thanks to the results of a major new genetic survey, any doubts that may have existed regarding its widespread breadth may be safely confined to the dust bin. In a paper published on December 19 in Nature Communications, an international team of geneticists unveiled some breathtaking findings that are nothing less than the equivalent of a DNA thunderbolt.After sampling 6,500 individuals born in Brazil, Chile, Colombia, Mexico and Peru, and comparing their genetic makeup to that of 2,300 other people from 117 reference populations worldwide, the esteemed scientists discovered that 23%, or nearly one out of every four Latin Americans who were tested, have Jewish genetic ancestry. Simply put, this means that there are literally tens of millions of descendants of Jews spread throughout the southern part of the western hemisphere.This is not wishful thinking or specious speculation. It is proof straight from the petri dish that Israel and the Jewish people now have an unprecedented opportunity to reshape our relationships with large parts of the Spanish and Portuguese-speaking world, including the growing number of Hispanics in the United States. As a December 21 article about the study in The Atlantic noted, the DNA survey is “one of the most comprehensive genetic surveys of Latin Americans yet” and it indicates that their Sephardi Jewish ancestry is “more widespread than previously thought.” “The genetic record,” the article points out, “now suggests that conversos – or people who shared ancestry with them – came to the Americas in disproportionate numbers”.Taken together with previous studies, such as one published a decade ago in the American Journal of Human Genetics, which found that 20% of Spain and Portugal’s combined population of 50 million people has Sephardi Jewish ancestry, we can now develop a much clearer picture of the extent to which our ancestors suffered so long ago in Iberia.From the historical record, we know that as early as 1391, a century before the expulsion of the Jews from Spain, widespread antisemitic pogroms swept across the country, leaving thousands dead and many communities devastated. In the decades that followed, there were waves of forced conversions as part of an increasingly hostile and dangerous environment for Jews. This reached a climax in 1492, when King Ferdinand and Queen Isabella gave Spain’s remaining Jews a dire choice: convert or leave forever. Large numbers chose exile. American historian Howard Morley Sachar estimated the number of Spain’s Jewish exiles at around 100,000, while the Hebrew University of Jerusalem’s Haim Beinart put the total at 200,000. Others have spoken of even more. But untold numbers of forcibly converted Jews, as well as those who voluntarily underwent baptism, remained. These included, of course, the Anusim (Hebrew for “those who were coerced”), whom historians refer to by the derogatory term “Marrano.” Many of them bravely continued to cling to Jewish practice, covertly passing down their heritage from generation to generation. In recent years, a growing number of their descendants, the Bnei Anusim, from across Europe, South America and parts of the US have begun to return to Israel and the Jewish people. Shavei Israel, the organization I founded and chair, has been leading the charge in helping Bnei Anusim around the world to reconnect with their roots. Our emissaries in places as far afield as El Salvador, Colombia and southern Italy, have seen a surge of interest among Bnei Anusim. Indeed, in my various travels, I have witnessed this burgeoning phenomenon first hand and the impact it has on individuals as well as entire communities.The fact of the matter is that as more people discover their historical Jewish connection, it inevitably impacts their attitudes toward Israel and the Jewish people. While some choose to return to Judaism and formally rejoin the Jewish people, most develop a greater affinity for Israel and Jewish causes, even if their religious and national identification remain unchanged. It is therefore essential that Israel and the Jewish people begin to actively reach out to Bnei Anusim and other descendants of Spanish and Portuguese Jewry and cultivate stronger ties with this burgeoning community. Thanks to advances in DNA technology, it is now possible not merely to “build bridges,” as the cliché goes, but to connect the two communities in a far more profound and intimate manner by highlighting the biological and genetic link between Latinos and Jews.Doing so can have a vast impact in a variety of fields, from encouraging greater support for Israel and Jewish causes to countering antisemitism and anti-Zionism. And it can build and cement a lasting and familial relationship between Latinos and Jews.Moreover, as I have long contended, we have a moral, historical and even religious responsibility to reach out to the descendants of the victims of the forced conversions and the Inquisition, and to facilitate their return. Through no fault of their own, their ancestors were cruelly taken from us. Centuries ago, the Catholic Church devoted enormous resources to tearing them away from the Jewish people, and it nearly succeeded. Our task now should be to show the same level of determination in embracing the Bnei Anusim and other Jewish descendants and welcoming back those who wish to come home. The writer is founder and chairman of Shavei Israel (www.shavei.org), the largest and oldest organization in the world today working with Bnei Anusim and other lost and hidden Jewish communities.