As Jewish Americans, we should feel obligated to speak out on behalf of the Dreamers and African refugees, and others.

By STEVEN A. FOX 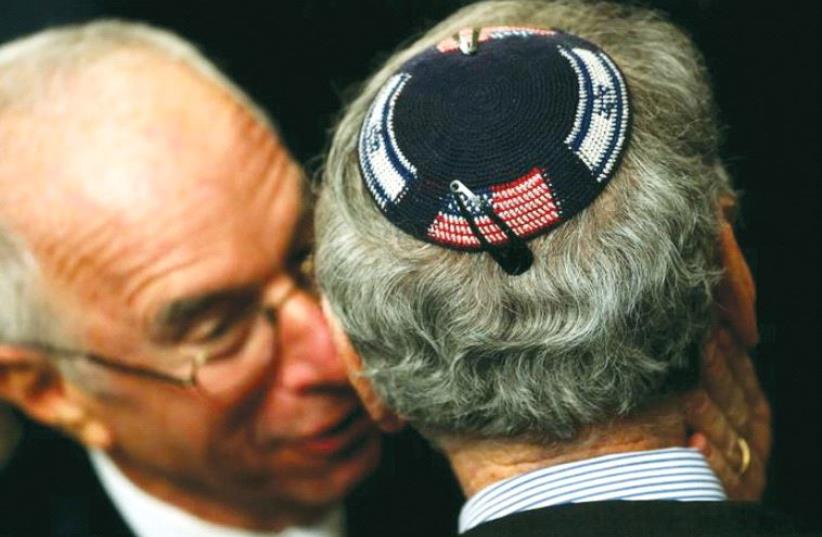 An American Jew wearing a kippa embroidered with the US and Israeli flags attends a Hanukka reception at the White House last year
(photo credit: REUTERS)
Advertisement
As an American rabbi, I know that I and my family members owe our lives to the openness and generosity of this country. At our Passover Seders last week, we were will be reminded that for us our ancestors were wandering Arameans.Being from somewhere else is embedded in our DNA, as the Haggada reminds us. My parents were German and Austrian Jewish refugees driven from Europe by the Holocaust. They were welcomed in by this country, rebuilt their lives here, and raised two Americans, my sister and me.Other than Native Americans, all of us who call America home came from somewhere else. Jews, as much as any other group, fled pogroms and poverty and discrimination. For 2,000 years, we have lived as refugees. Having been expelled from Israel, we were then pushed from place to place, expelled and persecuted in one country after another. It is no accident that a common antisemitic trope throughout history has been the image of the “wandering Jew” or the “rootless cosmopolitan.” These negative stereotypes share a kernel of truth in that our lives wherever we happened to live were often fragile and precarious.Our stories of the United States as a refuge inspire a deep sense of gratitude to this country and are integral to the Jewish American identity.We must recall this common history when threats arise to other groups seeking protection in our own time. A few weeks ago, the US Supreme Court rejected President Donald Trump’s attempt to speed up a court hearing challenging his efforts to deport young undocumented immigrants called “Dreamers.” Just a few days before, African refugees in Israel began a hunger strike to protest the government’s plan to deport refugees from Eritrea and Sudan, which is scheduled to go into effect on April 1.As a Jew, I believe fervently that Israel and America should offer shelter to these groups instead of endangering their lives. To offer refuge is to live by our Jewish and American values, to protect human rights, and to remember our history.Dreamers were brought to the US as children, involuntarily. Many of them have no memories of their parents’ countries – and many of those countries, such as El Salvador, remain dangerous. To send them back would be to penalize them for their parents’ actions, uprooting them from their homes and putting their very lives at risk. Threatening the 800,000 DACA (Deferred Action for Childhood Arrivals) recipients or 3.6 million total Dreamers with deportation is an attack on our deep-rooted Jewish American values.In Israel, the story is similar. From 2006-2012, thousands of Eritrean and Sudanese refugees arrived in Israel, fleeing violence, political instability and crushing poverty. Eritrea is so oppressive – it’s notable for its practice of indefinite military conscription, essentially slave labor – that it is known as the “North Korea of Africa.” Sudan, as many Jews know from our advocacy for Darfur, has been a hotbed of genocide and other severe crises.Many of these refugees were trafficked through the Sinai Peninsula, where they were tortured. Despite international treaty obligations, Israel has granted less than 1% of these people asylum. Almost every Israeli Jew has refugees in his or her family tree. We can’t sympathize with our own history and concurrently deny that sympathy to people suffering now.It is not just the Haggada that reminds us what it is to be a stranger and dependent on the benevolence of a host country. The Torah itself reminds us over and over to “love the stranger, for you were strangers in the land of Egypt” (Deuteronomy 10:19). One of the names of God used in the Talmud is “Rahamana” or “Compassionate One,” showing the importance of caring for our fellow human beings.This means that human rights should guide policy more than fear or hatred. The US welcomed my parents when they most desperately needed refuge. That reality shaped my family into the proud American Jews we became, painfully aware of our past and gratefully appreciative of our future.As Jewish Americans, we should feel obligated to speak out on behalf of the Dreamers and African refugees, and others. We must urge both the US and Israel to turn to their histories of immigration and refuge for the dispossessed and act with compassion toward those who so desperately need a home today. In this way, we celebrate Passover and we live the words “You shall not oppress a stranger, for you know the feelings of the stranger, for you were strangers in the land of Egypt.” (Exodus 23:9)The author is chief executive officer of the Central Conference of American Rabbis (CCAR).