The iconic South African leader had an ambivalent relationship with the Jewish state.

By STEVE LINDE
NELSON MANDELA, David Levy at Foreign Ministry in J'lem 370
(photo credit: Gil Hadani/Allpix/Jerusalem Post Archive)
Advertisement
As I introduced myself, feeling the strength in his large hand, he smiled and said, “Shalom!” I was dumbstruck by the powerful presence of Nelson Mandela, the legendary leader of the country in which I had grown up, the man credited with ending the brutal apartheid regime.But there he was, his large frame cutting a regal figure, choosing his words carefully in his distinct African accent, sitting opposite me and several other journalists and photographers around a table at the Foreign Ministry in Jerusalem on October 19, 1999. 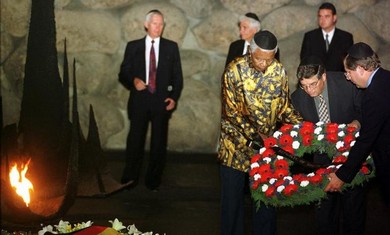 Holding hands as he walked out of a meeting with foreign minister David Levy, Mandela agreed to answer a few questions, and – as a reporter for Israel Radio’s English News – I recorded his answers.Asked why he had finally decided to visit Israel, he replied, “To the many people who have questioned why I came, I say: Israel worked very closely with the apartheid regime. I say: I’ve made peace with many men who slaughtered our people like animals. Israel cooperated with the apartheid regime, but it did not participate in any atrocities.”Mandela voiced his vehement opposition to Israel’s control of the territories it had “occupied” in the Six Day War, and he urged it to concede land to the Palestinians and Syrians, just as it had done with the Egyptians, for the sake of peace.“My view is that talk of peace remains hollow if Israel continues to occupy Arab lands,” he said.“I understand completely well why Israel occupies these lands.There was a war. But if there is going to be peace, there must be complete withdrawal from all of these areas.”He did, however, acknowledge Israel’s legitimate security concerns, declaring: “I cannot conceive of Israel withdrawing if Arab states do not recognize Israel within secure borders.”One of Mandela’s greatest strengths was his ability to bury, but not forget, the bitterness of the past and actively work for a fairer future.He did so when, upon his release from 27 years in jail, he emerged without exhibiting any signs of anger, reconciling with president F.W. de Klerk (earning them both Nobel peace prizes) and even sipping tea with Betsie Verwoerd, the 94-year-old widow of apartheid’s architect, Dr. Hendrik Verwoerd.He did so when he became president of the new democratic South Africa in 1994 and set up the Truth and Reconciliation Commission, pitting perpetrators of apartheid crimes against its victims and their families.He did so when he went to watch the Springboks team beat the All Blacks in the Rugby World Cup in 1995, depicted in the Clint Eastwood film Invictus.And he did so when, at the age of 81, he paid what was termed “a private visit” to Israel for two days after completing his five-year term as president and handing over the reins to his deputy, Thabo Mbeki, in June, and choosing to fly first to Iran, Syria and Jordan.The peace overtures of thenprime minister Ehud Barak had paved the way for Mandela – a devout Christian – to make his first and only pilgrimage to the Holy Land.After taking a jab at the Jewish state for being the only nation not to invite him when he was appointed president, and then refusing several invitations to travel here, Mandela said this trip was aimed at burying the hatchet – or, in his words, “to heal old wounds” both with Israel and South African Jews.Mandela had an ambivalent, almost love-hate relationship with Jews and Israel. Like Mohandas (Mahatma) Gandhi before him, his first job had been with a Jewish law firm in Johannesburg, and some of his closest friends, political advisers and business associates were Jewish.When he needed advice or money, they were the first people he called upon.Many South African Jews had supported him, but others had openly backed or implicitly endorsed apartheid. One of his close Jewish friends, Arthur Goldreich, provided refuge to Mandela and other ANC leaders at his farm in Rivonia, later made aliya and became a professor at the Bezalel Art School.On the other hand, Percy Yutar, the chief prosecutor at the infamous Rivonia treason trial at the end of which Mandela was given a life sentence, was Jewish, too. 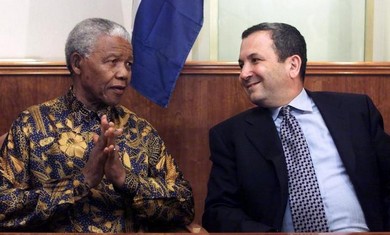 Mandela resented Israel’s military relationship with apartheid South Africa and passionately supported the PLO, which he saw as a liberation movement similar to his own ANC.He supported Israel’s right to exist as a democratic Jewish state, yet felt closer to its enemies: the PLO’s Yasser Arafat, Libya’s Muammar Gaddafi, Cuba’s Fidel Castro, Iran’s Mohammed Khatami and Syria’s Hafez Assad. Nevertheless, he praised his Israeli hosts for their warm reception and peace-making efforts. Mandela received a red-carpet welcome at the King David Hotel, where South African chief rabbi Cyril Harris, together with leaders of the South African Jewish Board of Deputies and Israel’s ambassador to South Africa, Uri Oren, greeted him.Hugging Harris, a good friend, he quipped: “Now I feel at home – my rabbi is here.”At a luncheon hosted by president Ezer Weizman and attended by cabinet ministers and other dignitaries, Mandela chose to thank the South African Jewish community. “One of the reasons I am so pleased to be in Israel is as a tribute to the enormous contribution of the Jewish community of South Africa. I am so proud of them,” he said.After a guided tour of Jerusalem’s Old City and Yad Vashem, he wrote in the Holocaust museum’s visitors’ book: “A painful but enriching experience.”After an upbeat meeting at the Prime Minister’s Office, he described Ehud Barak as “a man of courage and vision.”“The people of the world and Israel should support Barak. He has aroused our hopes,” Mandela said. “What has emerged from all my conversations is that the yearning for peace is very intense.”During the meeting, Mandela was thrilled to see Rabbi Dov Sidelsky, a South African immigrant and the son of Lazar Sidelsky, who had given Mandela his first job as a law clerk.Whites hiring black professionals was “almost unheard of in those days,” said Mandela, who remembered Dov as a young boy in Johannesburg.“I have found Jews to be more broad-minded than most whites on issues of race and politics, perhaps because they themselves have historically been victims of prejudice,” he wrote in his autobiography, Long Walk to Freedom.In his talks with Levy at the Foreign Ministry, Mandela shared his impression during his visit to Iran that the country had become more “moderate” under then-president Khatami.He said he had received assurances that the trial of 13 Iranians Jews arrested earlier that year on charges of spying for “the Zionist regime,” which was of great concern then, would be “free and fair.”Levy protested politely against Mandela’s reading of the situation, telling him that Iran, which backed terrorist groups targeting Jews and the Jewish state, was certainly not giving the 13 Jews a fair hearing. 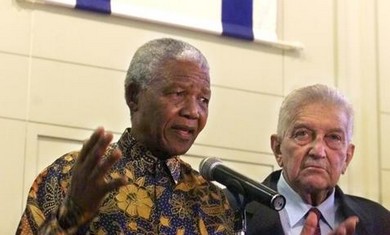 In July 2000, after a closed trial that violated international legal norms, 10 were given harsh sentences, while three others were acquitted. Levy had been right, Mandela wrong.Following his visit to Israel, Mandela flew to Gaza, where he enthusiastically embraced Arafat and endorsed Palestinian statehood but made a point of urging Arab acceptance of Israel.“The Arab leaders must make an unequivocal statement that they recognize the existence of Israel with secure borders,” he stressed.Mandela was undoubtedly one of the greatest leaders of the 20th century and an iconic symbol of hope and freedom in his beloved South Africa.While he supported Zionism in principle, he believed that if there was to be peace in the Middle East, Israel must negotiate a two-state solution with the Palestinians and avoid becoming a binational “apartheid state” – or risk becoming an international pariah like apartheid South Africa.A humble hero, Mandela was the first to acknowledge that he wasn’t always right, but as an advocate of justice for all, he was always ready to stand up and fight for what he believed was right, even when his views were not popular.During my youth in South Africa, Mandela was portrayed by the “white media” as the enemy, the jailed leader of a terrorist insurrection against the Afrikaner government.They labelled him “the Black Pimpernel” before he was arrested.But the seemingly impossible occurred: the Black Pimpernel became the beloved leader of “the Rainbow Nation,” affectionately called “Madiba” (the name of his Xhosa clan) by South Africans of all colors and creeds.Mandela once said, “It always seems impossible until it’s done.”May you rest in peace, Madiba. Shalom!