Our refusal to contend with historical facts

The point I was trying to make last week was not that we are evil, but that we are not saints, that our hands are not always clean, and that it is high time that we stopped denying these facts. 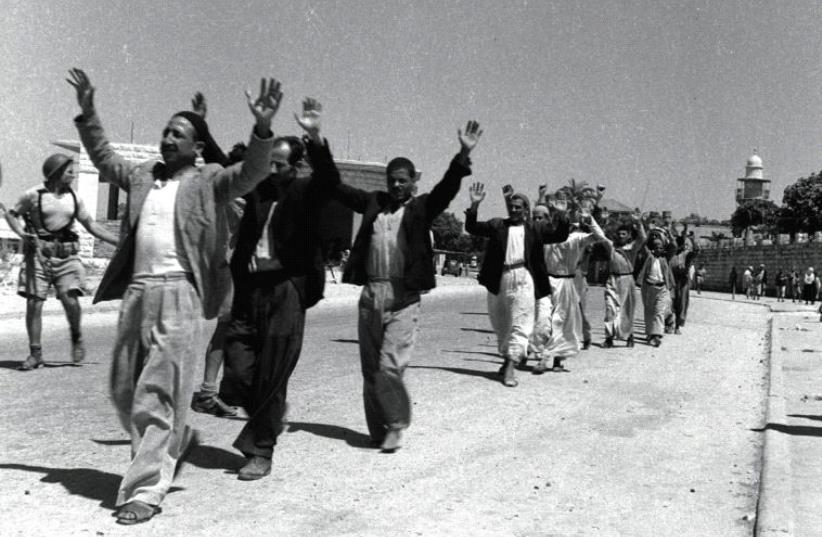 ARAB RESIDENTS of the town of Ramle raise their hands in surrender to Israeli soldiers on July 11, 1948
(photo credit: REUTERS)
Advertisement
One of the talkbackers who reacted to my most recent article accused me of “accepting the Arab version” of the alleged massacre committed by Jewish fighters at Deir Yasin on April 9, 1948.That is totally untrue. The Arab version spoke of rape and mutilation, of which there is absolutely no evidence, exaggerated the number of Palestinian fatalities and belittled those who survived.Nevertheless, the inescapable conclusion given all the evidence coming from Jewish sources, including a few ideologically neutral historians, is that Deir Yasin was not an event we can be proud of, and that many of those killed on that occasion, besides Arab fighters, were unarmed villagers, including elderly, women and children, who were simply executed.The point I was trying to make, and which I believe to be important, is not that our enemies are right when they describe us in the present day as a cruel, immoral and genocidal nation. I believe that if one were to place all the nations on a scale rating their humanity, compassion and moral principles, we wouldn’t fare too badly.I also happen to believe that the fact that fewer persons, both Jews and Arabs, have been killed in the course of the Arab-Israeli conflict since the 1947 UN partition plan than during the current five-year civil war and anarchy in Syria is due to the fact that in the former we are one of the sides to the conflict, while in the case of Syria we are not.The point I was trying to make last week was not that we are evil, but that we are not saints, that our hands are not always clean, and that it is high time that we stopped denying these facts.Had the Arabs won in the 1948/49 war, they might well have practiced ethnic cleansing of the worst variety.But they did not win – we did, as we did the Six Day War, and it is we who have performed acts of smallscale ethnic cleansing.Incidentally, it is not only the Israeli Right with whom I take issue for refusing to be candid about the historical truth.One morning back in 1979, when I was working with the late Yigal Allon, I walked into his office and found him fuming with anger at Yitzhak Rabin. It turned out that that morning the translator of Rabin’s memoirs (Pinkas Sherut in Hebrew), who had translated the manuscript before it had been approved by the censor, had published in a foreign newspaper several paragraphs from a chapter on the War of Independence battle for Lod and Ramle (in which both Allon and Rabin had been directly involved) which had been deleted by the censor. The paragraphs dealt with the decision to expel the civilian Arab population of the two Arab towns to Jordanian-held territory. The order for the expulsion had been given by Allon.Though I believed at the time, and believe to the present day, that Yigal Allon was one of the more moral military commanders we ever had, I confronted him on this issue. I told him that while I was a student in London I had met an Arab refugee from Ramle, who had personal recollections of the expulsion, and that given the fact that there were several thousand such refugees, whom we had sent packing to Jordanian-held territory, it seemed futile and counterproductive to deny the facts. I added that I was sure that at the time that he had given the order he had believed that it was the right thing to do, and that he ought either to admit the decision and justify it, or say that in retrospect he had concluded that he had erred. Allon didn’t reply.To the present day the official position of the Israeli authorities is to keep the relevant information about the expulsions under wraps, even though it shows that the vast majority of Palestinian refugees fled of their own volition. I believe that this attitude is mistaken and that Israel gains nothing from refusing to own up to controversial actions it took. I do not deny that admitting to such facts may serve as ammunition in the hands of our enemies. However, I believe that it can fortify our position and credibility among those who are not our enemies but are increasingly inclined to doubt our truthfulness.Though I am critical of Breaking the Silence, some of whose activists go beyond the mere search for justice and are intent on causing damage to Israel’s image abroad, the fact that most Israelis seem to consider the uncovering of grievous wrongdoing by Israeli military personnel an act of treason, or refuse to believe that such wrongdoing actually takes place, is once against a symptom of a people refusing to look in the mirror and contend with the truth.If we wish to be “a light to the nations” (as Education Minister Naftali Bennett recently declared), we must first rid ourselves of our inclination to shy away from unpleasant truths, and give ourselves a true account of our own actions.Something to think about toward the approaching Yom Kippur.The writer is a political scientist.