Stop the escalation in Israel’s actions in east Jerusalem

Managing the “neighborhood chaos” while constantly fueling it is tantamount to playing a cynical game with the lives of all Jerusalem residents. 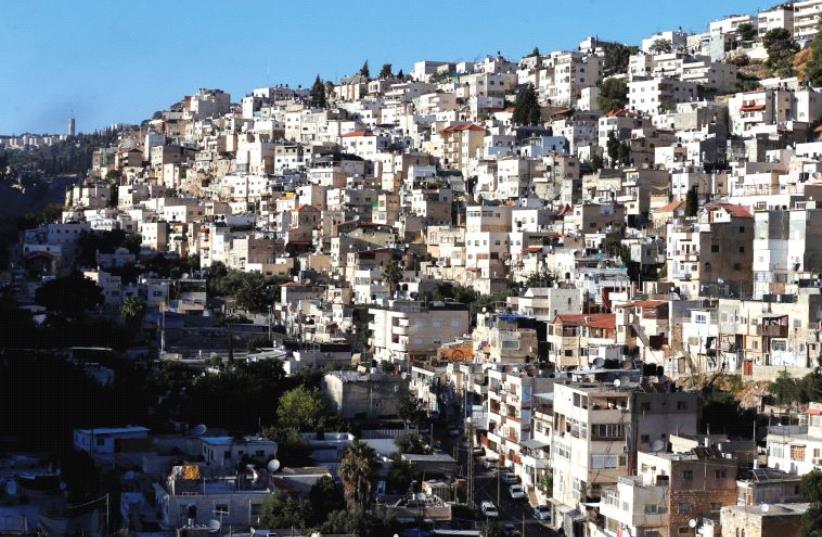 SILWAN, an Arab neighborhood close to Jerusalem’s Old City, one of many places the author claims Arab residents are being displaced from
(photo credit: REUTERS)
Advertisement
The sharply worded condemnation issued by the US State Department last week regarding promotion of building plans in Jerusalem was greeted with seeming amazement by Israeli officials. Such astonishment is in itself astonishing. Construction in Jerusalem has been repeatedly declared a major obstacle to the peace process by the US administration and the entire international community. But the government has long been playing a different ballgame.Even before US Secretary of State John Kerry’s peace initiative, and all the more so since its collapse, the government has been acting as though there is no political conflict. The conflict is now packaged as a local dispute between neighbors, broken down into a series of independent incidents and governed by chaos. The neighborhood bully has earned the right and the obligation to do as it pleases. As the chaos expands, Israel presumes it has an even greater right to take actions to establish further facts on the ground, in a way that only heightens the chaos. This dynamic is being played out first and foremost in Jerusalem.The escalation in Israel’s unilateral actions in east Jerusalem is evident in almost every realm, and all branches of government are parties to it. To understand where things are headed, we need only look at the signs that have been recently erected by the Israel Nature and Parks Authority at observation points in and around the Historic Basin.Palestinian names have been erased, replaced by biblical and semi-biblical names, presenting planned and existing settlement projects as long-established facts.Silwan, with its 35,000 residents, out; City of David, the King’s Garden and every settler outpost or project, in. Jerusalem is now readying itself for the coming school year, in which Israeli pupils will stream to the city as part of the “Jerusalem Unity Year” announced by the minister of education; the Palestinian presence will be invisible to them even as they walk through it.The drive to push the Palestinian presence out of Jerusalem – either by direct action or by engaging in practices that render it unseen – is implemented every day.Politics takes the form of endless bureaucracy, by means of which the state expedites the building process for Jews and delays Palestinian construction to the point of despair; encouraging illegal construction by Jews while ramping up the pace of Palestinian house demolitions, which has doubled in the past year. Since 2009 the Netanyahu government has approved detailed plans for 10,000 housing units for Israelis beyond the Green Line in Jerusalem, but only about 600 housing units – in one single plan – for Palestinians.Building plans for Palestinians – including plans submitted by the residents themselves in coordination with the municipality, but at immense personal expense in the absence of municipal investment – get stuck permanently in the planning pipeline, despite having met formal basic requirements.More than 100 families in Silwan and the Old City are at risk of being displaced by settler organizations that have taken over their homes with the active administrative and legal assistance of state authorities.Roughly 100,000 Palestinian residents of the city have been living for the past decade in Jerusalem neighborhoods left outside the separation barrier, effectively cut off from municipal services despite paying municipal taxes and being linked to the city by work, identity, community and family ties. On Prime Minister Benjamin Netanyahu’s and Jerusalem Mayor Nir Barkat’s watch, the poverty rate in east Jerusalem, which already stood at 60 percent a decade earlier, has risen to a chilling 82 percent.Managing the “neighborhood chaos” while constantly fueling it and continually eroding the Palestinian presence in the city is tantamount to playing a cynical game with the lives of all Jerusalem residents and with the city’s future. Despite the best efforts of the prime minister and the mayor, Jerusalem has been and remains the physical and symbolic home and future capital of two peoples. Consigning one side to a life of poverty, neglect, dispossession and loss of political hope will not make it disappear, but it is an almost certain formula for paralyzing the city.The celebratory signs being put up in Jerusalem do not tell the story of half-empty hotels, tourists who aren’t arriving, old Jerusalem cafes that are closing down one after another. Behind the atmosphere of summer festivals and the celebrations of the coming year hides a sad city, which will wake up to an even sadder tomorrow when the festivities have wound down.The author is executive director of Ir Amim.