Keeping kosher or Shabbat ‘in your own way’ is not the start of a slippery slope towards heresy. If done right, it’s taking ownership over your Judaism. 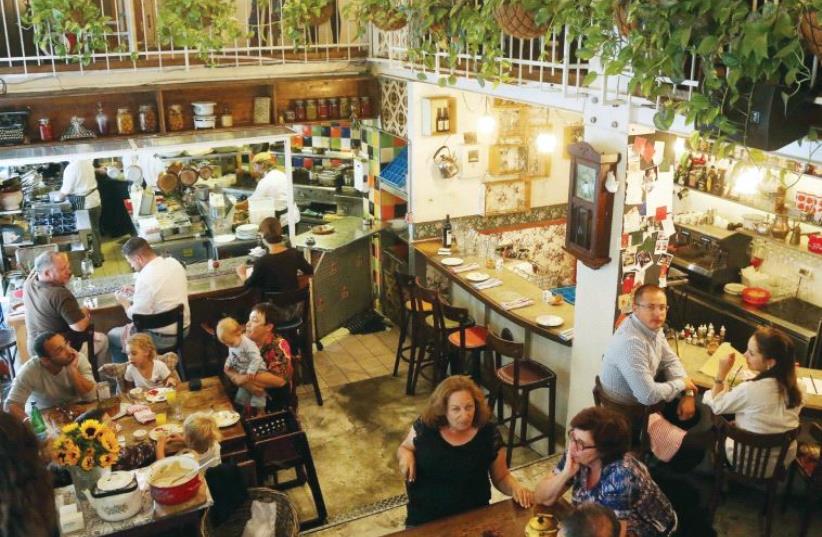 Diners enjoy a meal at the Machneyuda restaurant (non-kosher) in Jerusalem
(photo credit: MARC ISRAEL SELLEM)
Advertisement
Dennis Prager has a radical proposal. In a column published earlier this month in the Jewish Journal, he makes the argument that “if you don’t eat bacon or shellfish because you are a Jew” – even if you eat beef or chicken that hasn’t been slaughtered according to Jewish Law or you eat out in restaurants without a kosher certificate – “you can and should proudly say that you keep kosher.”Prager is not a rabbi nor is he strictly Orthodox, so his religious “ruling” won’t resonate with many of the people he’d probably like to reach. But the sentiments behind it are worth considering, wherever you are on the Jewish spectrum.Prager writes that we shouldn’t treat keeping kosher as an all-or-nothing exercise. He likens it to tzedaka (charity), which is just as much a Torah commandment as keeping kosher.While the amount one should give to charity can be interpreted in many ways (10 percent is often cited although that’s really just a guideline and there are many nuances), Prager’s point is that even if one’s donations are less than the ideal, you wouldn’t say that the person is “not giving to charity” or – even worse – is a “tzedaka desecrater.”So why do we decry a person who keeps only some “of what Judaism demands regarding kashrut” as not keeping kosher at all? Prager asks.The same holds true for Shabbat, he adds.“If a Jew refrains, even at the sacrifice of income, from working on Shabbat [but] turns on lights in the house” why is that person not considered shomer Shabbat [an observer of Shabbat]? Prager wonders.“Why would Jewish life want to exclude [Jews from] considering themselves religious” rather than the other way around? Prager’s comparison with tzedaka is intended to apply ethical reasoning to the realm of ritual. His logic, unfortunately, is flawed. There’s a big difference in Jewish law between fulfilling a positive commandment like giving charity, and transgressing a negative one like not eating pork, several people pointed out online.“If I hit the brakes but don’t stop before going through a stop sign, can I [still] tell the officer that I stopped?” asked Meir Liberman on the Jewish Journal website.Similarly, if someone “keeps only a portion of the civil law, is he an upstanding citizen or a criminal?” queried Eliezer Nadel in the same comments thread.But if you put aside the Talmudic wrangling and look at the bigger, cultural argument, Prager may be on to something. He just left out four little words: “in my own way.”A Jew who stays clear of ham but will have a fish sandwich at a McDonald’s is keeping kosher “in his or her own way.” A Jew who doesn’t use electronics on the Sabbath but drives to the mountains to go on a hike with the family is keeping Shabbat “in his or her own way.”Or as social media activist Laura Ben-David, who regularly writes about Jewish and Israel issues, says: “Someone is religious if they declare themselves to be. That is, they are someone who is committed to that ideal regardless of how well they keep the rules.”Keeping kosher or Shabbat “in your own way” is not the start of a slippery slope towards heresy. If done right, it’s taking ownership over your Judaism.Rather than doing everything “because that’s what Jews have always done,” adding the words “in my own way” represents a profoundly mindful approach; a thoughtful reclamation of observance.“A kid who comes from a home where kosher is not kept at all, and chooses a hot pretzel over a burger at an amusement park, is probably making a greater sacrifice than when I’m careful with cholov yisrael,” explained a commenter from North Carolina in a Facebook response to Prager’s thesis. (“Cholov yisrael” refers to milk products made under the supervision of an observant Jew.)Indeed, inconsistency isn’t a sin – it’s the essence of what it means to be human.We may strive to stick to whatever golden path we have defined for ourselves, but I’ve yet to meet a person who didn’t falter.And that’s a good thing. It’s honest, authentic and, frankly, a relief from the heaviness that often accompanies stringencies of any kind.What if we let ourselves off the hook a bit religiously? Those cheese and crackers at the reception didn’t have OU (Orthodox Union) supervision? That’s OK, because I’m steering clear of the shrimp cocktail. I keep kosher “in my own way.”That vegan restaurant doesn’t have a kashrut license? Make my reservation now! I’m all for patronizing a place that does less harm to animals and the planet as I blaze my own interpretation of kashrut.Prager may have employed a dicey halachic justification for his bold supposition, but he’s absolutely right about this: the days of binary either-or thinking about religion are over.As Dana Meilier-Gross wrote in response to Prager’s article, “You accept the level of hypocrisy that works for you.”