Time to put Germany’s foreign minister in his place

For Gabriel to scold Israel about the location of its capital or where Jews should be allowed to live is scandalous and shameful. 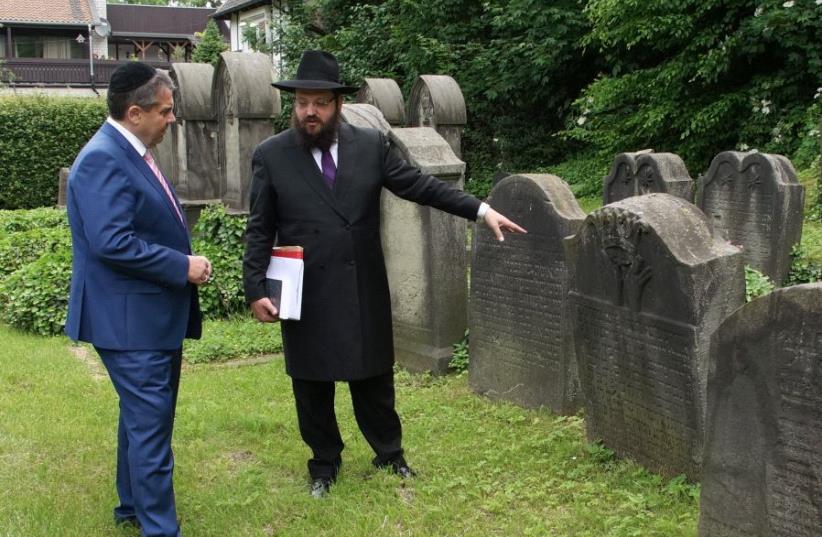 German Foreign Minister Sigmar Gabriel and Rabbi Yehuda Teichtal
(photo credit: ALEXANDER TIMANOV)
Advertisement
Although he was appointed to his current post barely 10 months ago, German Foreign Minister Sigmar Gabriel has wasted little time doing his utmost to bully Israel and cause damage to its international standing.Displaying a remarkable degree of unrestrained arrogance, Deutschland’s top diplomat has once again stuck his nose into matters where it has no place being, and it is time for the Jewish state to rebuke him in no uncertain terms.Amid reports earlier this week that US President Donald Trump was planning to recognize Jerusalem as Israel’s capital, Gabriel went public and blasted the decision, adding his voice to the likes of those such as Palestinian Chairman Mahmoud Abbas, Turkish President Recep Tayyip Erdogan and Iran’s thug-in-chief Ayatollah Ali Khamenei.Why the foreign minister of Germany feels entitled to comment on where the United States decides to locate its diplomatic representation in a foreign country, or where the Jewish state chooses to seat its capital, was naturally left unsaid.But what Gabriel did not hesitate to declare was that “it is in everyone’s interest that this does not happen.”The pretentiousness of that statement is simply breathtaking. Does Gabriel presume that he knows better than the US and Israel what is in each of their own respective interests? How would he feel if the Washington or Jerusalem or anyone else for that matter tried to dictate to Berlin what is in Germany’s national interests? Needless to say, this is hardly the first time that Gabriel has shown an astounding level of hostility to Israel.Back in April, while on an official visit, he insisted on meeting with NGOs that badmouth Israel and accuse the country of committing war crimes. The move led Prime Minister Benjamin Netanyahu to take the unusual step of canceling talks that had been scheduled with Gabriel, saying, “My policy is clear: Not to meet with diplomats who visit Israel and engage with organizations that slander Israeli soldiers and seek to have them put on trial as war criminals.”Later that month, Gabriel penned an article in the German newspaper Frankfurter Rundschau that was widely condemned for trivializing the Holocaust and asserting that Social Democrats and Jews were equal victims of Nazi persecution.And as if that wasn’t enough, in May, Gabriel hosted an Iranian cleric who openly calls for Israel’s destruction, at an event sponsored by the German Foreign Ministry under the title, “The Conference on the Responsibility of Religions for Peace.”Then, in June, Gabriel’s Foreign Ministry spokesman compared Israel’s laws regarding the transparency of funding received by NGOs to those of China and Russia, as though the Jewish state’s vibrant democracy was in the same category as those regimes.In a sense, none of this is all that surprising, given some of the things that Gabriel has said about Israel in the past.In April 2012, while serving as head of the German Social Democratic Party, Gabriel labeled Israel an “apartheid regime” while on a visit to the Jewish state.After his remarks sparked a furor, Gabriel doubled down, reiterating his view that the country was an apartheid state.Gabriel’s gall is particularly infuriating in light of his personal background. His father, as he told the NRC Handelsblad, a leading Dutch paper, in June 2016, “was a Nazi until his last breath.”Nonetheless, rather than seeking to atone for what his parents’ generation did to the Jewish people, Gabriel dares to lecture, lambaste and libel the Jewish state instead.This is nothing less than an outrage and it warrants a harsh response.For Gabriel to scold Israel about the location of its capital or where Jews should be allowed to live is scandalous and shameful.Indeed, it brings to mind an incident that took place back in early May 1981, when West German chancellor Helmut Schmidt said that Germany had a moral obligation to the Palestinians.The remarks prompted Menachem Begin to give the German leader, who had served in the Nazi army on the Russian front and in the Battle of the Bulge, a dressing-down that he richly deserved.“From a moral point of view, Schmidt’s statements certainly rank as the most callous ever heard,” Begin said, adding, “It seems that the Holocaust conveniently slipped his memory and he did not make mention of a million and a half small children murdered, of entire families wiped out.“The German debt to the Jewish people can never end, not in this generation and not in any other,” Begin thundered. “The entire nation cheered on the murderers as long as they were victorious. But what do we hear? We hear of a commitment to those who strove to complete what the Germans had started in Europe,” he said.Begin was absolutely correct then and his words are no less compelling today.Israel should call Gabriel out for his unbecoming behavior in the sharpest of terms. No one expects Germany to agree with every policy or action that Israel adopts. But we most certainly do expect the nation that slaughtered our people to show a little less hostility and a lot more compassion and understanding.

Tags germany and israel
Advertisement
Subscribe for our daily newsletter