Comment: What will the US do if Hamas wins the upcoming Palestinian elections?

A Hamas victory could destabilize the entire region. 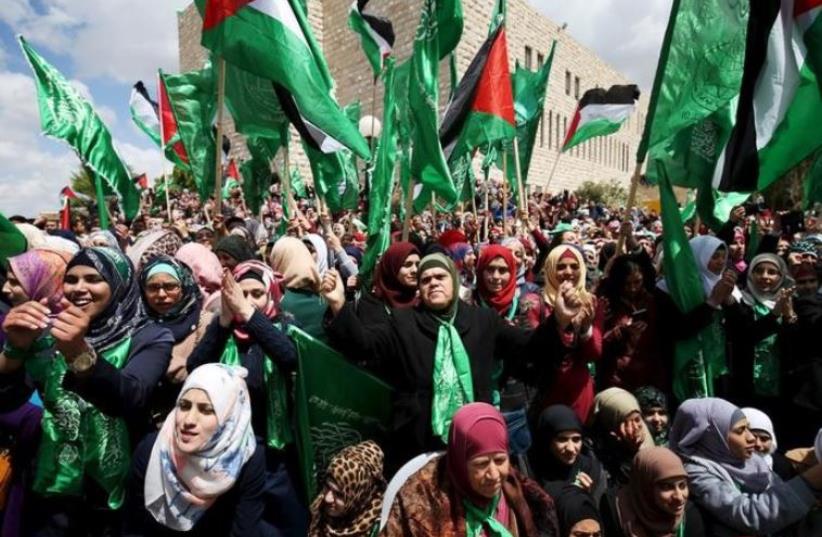 Palestinians supporting Hamas chant slogans during a rally celebrating Hamas student supporters winning the student council election at Birzeit University in Ramallah
(photo credit: REUTERS)
Advertisement
This October will mark the first Palestinian election in over a decade.The previous election, 10 years ago, was a parliamentary election that brought Hamas into power, while this one is a municipal election. Knowing what happened in 2005, why would the corrupt, despised Palestinian Authority risk an election when Palestinians might choose Hamas’s Islamism over Fatah’s cronyism? The answer is that the PA was over-confident that Hamas would boycott this election, as it boycotted the municipal elections in 2012. Now, Hamas could win municipalities in Samaria, literally a stone’s throw from the Israeli center where 80 percent of the Jewish population resides. Hamas is looking now for a foothold in the West Bank, replicating its path to power in Gaza in 2005, and also diverting attention from its failure to provide essential services in Gaza.Will an American administration and Congress allow American tax dollars to fund Hamas-controlled municipalities, if they win elections there? In 2006, Congress passed the “Palestinian Anti-Terrorism Act,” prohibiting the executive branch from directly funding any Hamas-controlled Palestinian government. But when a unity Palestinian government was announced in 2014 that included Hamas, the Obama administration offered them money, with the excuse that the future Hamas-Fatah government was to be composed of only technocrats, not of the actual murderers of civilians one would label as terrorists.But more troubling is that a Hamas victory would come at a very sensitive time.According to Pinhas Inbari of the Jerusalem Center for Public Affairs, “The Palestinian Authority is getting dismantled... every province is going its own way, and Ramallah is losing its control over the entire West Bank.” In Hebron “we have the tribal system getting stronger” and in Nablus, “the refugee camps are taking over the city... spreading anarchy all around.”Unless Fatah can get its act together at its upcoming Fatah General Congress to beat Hamas, its house is divided between Palestinian Authority President Mahmoud Abbas and his rival Muhammad Dahlan.Not only are Israel and the US Congress keenly interested in the outcome of this election, but so are Egypt, Jordan and Saudi Arabia. A Hamas victory would be a victory for the Muslim Brotherhood (MB), the enemy of President Abdel Fattah Sisi in Egypt and also of the Saudi royal family. In Jordan the Brotherhood-associated “Islamic Action Front,” a rival of the government of Jordan, is having a rough enough time accommodating millions of Syrian refugees, and could be destabilized by a Hamas victory on its western bank.Avi Issacharoff of The Times of Israel reported, “The threat to Fatah is real enough that COGAT commander Maj. Gen. Yoav Mordechai... and top Shin Bet [Israeli Security Agency] officials... [have] warned high-ranking PA officials that holding the elections could be a dangerous gamble.”Some in Israel even favor foreign aid bolstering the PA or even Hamas to avoid having anarchy and civil war next door.Unfortunately we already know which way Palestinians are leaning. At Palestinian universities, Hamas student leaders defeat Fatah-supported candidates regularly, while opinion polls in both the West Bank and Gaza reveal Palestinian Arabs wouldn’t mind seeing another war against Israel.So what should Congress do? Some will rationalize that giving American taxpayer money to an organized terrorist entity is the lesser of two evils, avoiding the collapse of the PA, an American foreign policy interest.But a strong case can be made to withhold aid from anything run by Hamas, which is uncontestably a terrorist organization. The congressional legislation of 2006 makes it clear that the president must certify that “no ministry, agency, or instrumentality of the Palestinian Authority is controlled by a foreign terrorist organization... [and] refrain from financially supporting the terrorist organization Hamas... until Hamas agrees to recognize Israel, renounce violence, disarm, and accept prior agreements... [and] eliminate anti-Israel and anti-Semitic incitement,” which even the PA has never done.Congress needs to keep the US position clear: we don’t fund terrorist organizations, and Hamas is a terrorist organization.The author is the director of MEPIN™ (Middle East Political and Information Network™) and a regular contributor to The Jerusalem Post. MEPIN™ is a Middle East research analysis read by members of Congress, their foreign policy advisers, members of the Knesset, journalists and organizational leaders. He regularly briefs members of Congress on issues related to the Middle East.