Jewish citizens of Israel see US president as more pro-Palestinian than pro-Israel by a margin of 28 to 18 percent.

By Gil Stern Stern HOFFMAN
OCTOBER 14, 2012 00:55
US President Obama with PM Netanyahu at White House 370
(photo credit: REUTERS/Ibraheem Abu Mustafa)
Advertisement
The gap between the percentage of Jewish Israelis who consider US President Barack Obama’s administration more pro-Palestinian and those who deem it more pro-Israel rose by 10 percentage points over the past six months, according to a Smith Research poll sponsored by The Jerusalem Post.The poll found that 28% believe the Obama administration is more pro-Palestinian, 18% find it more pro-Israel and 40% call it neutral, with 14% declining to participate. A Post/Smith poll asking the same question in April found that the proportion of Israelis who called the administration more pro-Israel and more pro- Palestinian was equal at 24%. 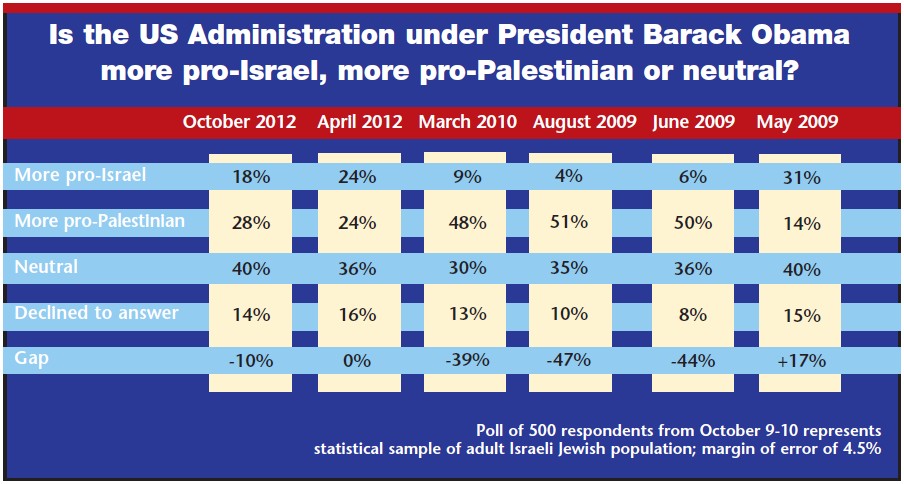 Jerusalem Post poll
Click image to enlarge.Israelis who identify themselves as right-wing were four times as likely to deem the Obama administration more pro-Palestinian than were leftwing Israelis, at 44% to 11%.Among left-wing Israelis, 28% said the administration was more pro-Israel and 52% said it was neutral. Among rightwingers, 15% said it was more pro-Israel and 25% said it was neutral.The poll of 500 respondents representing a statistical sample of the adult Israeli Jewish population was taken on Tuesday and Wednesday last week.It had a margin of error of 4.5 percentage points.

Click here for special JPost coverageThe Post has asked the same question eight times in polls since May 2009 and the results have become part of the historical record on how Israelis view the Obama administration.Citing the Post’s polls in his book Bending History: Barack Obama’s Foreign Policy (2012), former US ambassador to Israel Martin Indyk wrote: “The Israeli prime minister knew from bitter experience that the Israeli public would punish him for mishandling relations with a popular US president, but he also knew that they would support him if he stood up to an unpopular US president, which is what Obama fast became in Israeli eyes.”In the first Post/Smith poll in May 2009, before the Obama administration started taking action on the Israeli-Palestinian issue, 31% predicted that the administration would be more pro-Israel and 14% said more pro-Palestinian.The next poll was taken less than a month later, following the first White House meeting between Prime Minister Binyamin Netanyahu and Obama, and the American president’s landmark speech to the Muslim world in Cairo.The poll found a huge shift had taken place, with the proportion calling the Obama administration more pro-Palestinian rising from 14% to 50% and the proportion calling it more pro-Israel falling from 31% to only 6%.The proportion of those calling the Obama presidency more pro-Israel than pro-Palestinian fell in August 2009 to a low of 4%, and rose to 9% in March 2010, 10% in July 2010 and 12% in May 2011.In September 2011, the same question was asked in a survey sponsored by this newspaper that was conducted by another pollster that used different methods. Keevoon Strategies took the poll immediately after Obama delivered what was considered a very pro-Israel address to the UN General Assembly and blocked an effort by the Palestinians to persuade the UN to unilaterally declare a Palestinian state along the 1949 armistice lines.That poll found that the percentage of Israelis who considered the Obama administration more pro-Israel than pro-Palestinian was 54%.