This election revealed that there are divisions across impermissible lines: racial, ethnic, gender, religious, class, and a willingness to resort to violence. 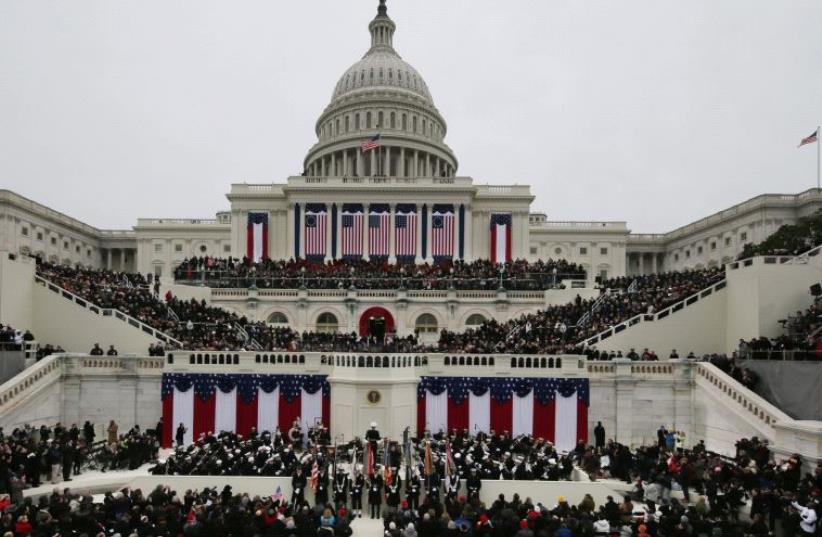 US President Barack Obama delivers his inaugural address during the presidential inauguration on the West Front of the US Capitol in Washington January 21, 2013.
(photo credit: REUTERS/SCOTT ANDREWS/POOL)
Advertisement
With the world’s attention focused on the presidential election, some attention must be devoted to the problems we will continue to face the day after the election, regardless of who is elected. Here are some of these problems.

Alan Dershowitz. (Photo credit: REUTERS)1. The world will continue to move away from the center and toward the extremes on both the Right and the Left. In many parts of Europe – from Poland to Hungary to Greece – neo-fascist parties are strengthening their influence in their governments. In the United States the alt-right has been considerably strengthened by the Trump candidacy, without regard to whether Trump himself wins or loses the election.The hard Left is also increasing its influence in some part of Europe and on many university campuses. The British Labor Party has now been hijacked by radical extremists on the Left. In many universities, the absurd concept of “intersectionality,” which has become a code word for antisemitism, is dominating discussions and actions by the hard Left.The Center is weakening. That will be the case even if Hillary Clinton – a centrist – is elected. The empowerment of extremes poses great dangers to the world. The hard Right and the hard Left have more in common than either has to centrist liberals and conservatives. They both hate America, distrust government, demonize Israel and promote antisemitic tropes. The election of Clinton might ameliorate this problem, but it will not eliminate it. The election of Trump would exacerbate it.2. Following the election President Obama may try to tie the hands of his successor, regardless of who it may be. During the lame-duck period, when Presidents can act without political accountability, he may foolishly send the Israel-Palestine conflict to the United Nations. This would mean the end of the peace process, because the Palestinians would be dis-incentivized from entering into the kinds of direct negotiations without preconditions that the Israeli government continues to offer, and that is the only realistic road to peace. The only hope of stopping this counterproductive move would be for the President elect to insist that her or his hands not be tied by the lame-duck president.3. The problem revealed by FBI director Comey’s ill-advised statements over the past four months, will not end with the election. Comey is a good man, but he has demonstrated an inability to control himself and his agents. The problem of unlawful FBI leaks has become pervasive. It must be addressed by the new administration. Replacing Comey will not be enough, the entire culture of the FBI must be changed and it must be restored to its rightful position as the silent investigative arm of the Justice Department. Indeed, even more fundamental structural changes are now required. The entire Justice Department, of which the FBI is one component, has become too politicized. In most other western democracies, there is a sharp division between the Minister of Justice, who is a political aide to the president or prime minister, and the Director of Public Prosecution, who is a civil servant completely removed from politics. Only the Director of Public Prosecution decides who to investigate and who to prosecute. The political minister plays no role in such decisions. But in the United States we merged these two distinct roles into the job of Attorney General. This must change if our system of justice is to be de-politicized.4. This election has exacerbated the long-standing problem of criminalizing policy differences. We are quick to confuse differences in policy with charges of criminal behavior. During this election, both sides accused the other of criminal conduct: Trump more so than Clinton, but even some Democrats were quick to cry “crime.” I have long railed against this development, whether it involved accusations against Democrats like Hillary Clinton or Republicans like Congressman Tom Delay and Governor Rick Perry. The criminal law must be reserved for willful deliberate and clearly defined crimes. We are moving away from that understanding and toward a dangerous expansion of the concept of crime in the context of political differences.5. Finally, the healing process must begin the day after the election. Lincoln’s words should be our guide: “With malice toward none, with charity for all.” It is unlikely that either the winners or the losers will be able to avoid malice and extend charity following this most contentious of elections, but it is essential that the loser accept the result and that the winner be gracious. Both Richard Nixon and Al Gore provide somewhat different models of appropriate responses.This election revealed that there are deep divisions within the American electorate. Some of these divisions are reasonable and indeed desirable. These include differences over economic policies, foreign policies and other political issues. But this election revealed that there are divisions across impermissible lines: racial, ethnic, gender, religious, class, and a willingness to resort to violence. These divisions will be much harder to heal. But the process must begin on the day after the election.