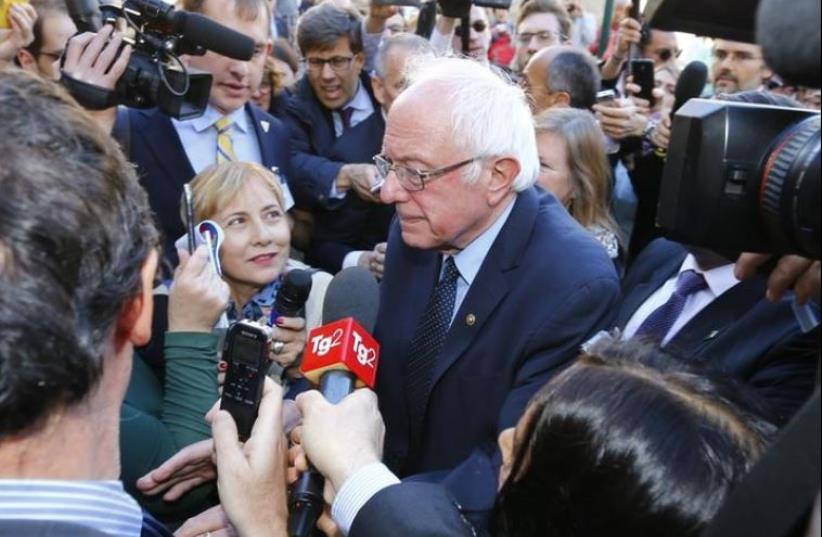 US Democratic presidential candidate Bernie Sanders speaks with media and supporters during his visit to the Vatican , April 15, 2016.
(photo credit: REUTERS)
Advertisement
VATICAN CITY  – Bernie Sanders denounced capitalist excess, called for a global “moral economy” and praised Pope Francis’ leadership in a speech here.The Jewish senator spoke for 10 minutes Friday at the Roman Catholic Church’s Pontifical Academy of Social Sciences just hours after making some similar points in a testy Democratic presidential debate in New York ahead of the state’s Tuesday primary.The Vatican conference marked the 25th anniversary of Centesimus Annus, an encyclical on the economy and social justice after the fall of communism promulgated by the late Pope John Paul II.“Twenty-five years after Centesimus Annus, speculation, illicit financial flows, environmental destruction and the weakening of the rights of workers is far more severe than it was a quarter century ago,” said Sanders, an Independent from Vermont. “Financial excesses, indeed widespread financial criminality on Wall Street, played a direct role in causing the world’s worst financial crisis since the Great Depression.”The issue of wealth and income inequality “is the great economic issue of our time, the great political issue of our time and the great moral issue of our time,” he said.“In the year 2016, the top 1 percent of the people on this planet own more wealth than the bottom 99 percent, while the wealthiest 60 people – 60 people – own more than the bottom half – 3 1/2 billion people. At a time when so few have so much, and so many have so little, we must reject the foundations of this contemporary economy as immoral and unsustainable.”Sanders seemed full of energy despite flying overnight from New York after debating his rival for the Democratic nomination, former Secretary of State Hillary Clinton. Some political commentators criticized him for leaving the state while trailing Clinton, the front-runner in the contest, in polls ahead of voting there.He defended the trip to reporters and a small group of supporters, who mobbed him outside the Vatican after his speech. The supporters chanted “Bernie, Bernie” and held “Feel the Bern” signs.“I know that it’s taking me away from the campaign trail for a day, but when I received this information it was so moving to me that it was something that I could just simply not refuse to attend,” Sanders said, smiling in the afternoon sunlight.He said he was “so excited, so proud to be here with like-minded people trying to create a just economy.”Sanders lauded Pope Francis for his advocacy of economic justice and his “enormously important” role in speaking out against climate change. He underscored that the phenomenon “is real and caused by human activity” and slammed “the greed of the fossil fuel industry,” which he said was “destroying our planet.”Sanders was not scheduled to meet with the pontiff during his brief visit to Rome.