Mike Evans also suggests that a US naval base be created in Haifa. 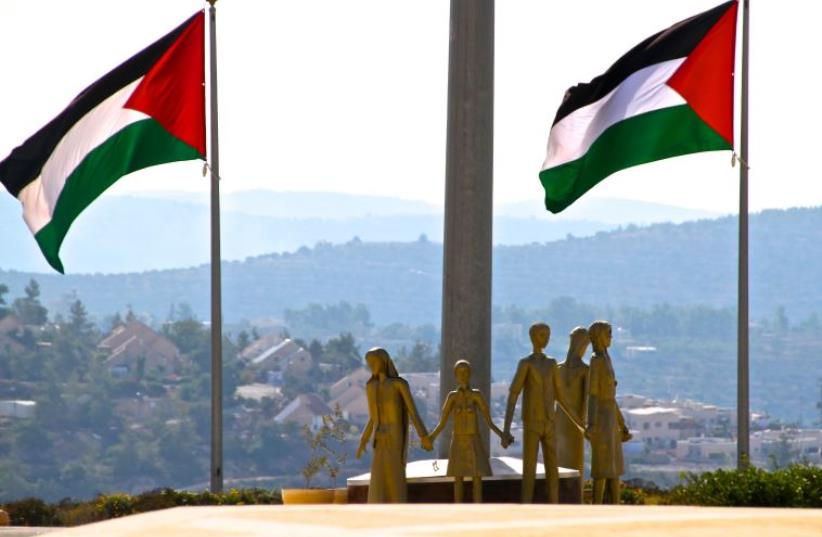 Palestinian flags flying by the Rawabi visitor center in the West Bank
(photo credit: TOVAH LAZAROFF)
Mike Evans, a prominent Christian Evangelical leader in the US, has recommended that the Republican nominee for US president limit Palestinian sovereignty in the event that a two-state solution is agreed upon under his tenure.Speaking to The Jerusalem Post, Evans said that any future Palestinian state should not be able to control its own airspace, have a standing army or enter into international treaties with other countries.
Donald Trump addressing the AIPAC conference
He and large parts of the Evangelical movement in the US are supporting Trump for president, but he believes Israel would nevertheless be in safe hands if Hillary Clinton should be elected president.He also praised President Barack Obama’s military and strategic cooperation with Israel over his two terms in office.In his recommendations for limiting Palestinian sovereignty in any final status agreement, Evans said, “It [a Palestinian state] cannot have traditional statehood, because a traditional state will be an existential threat to the state of Israel,” especially if it were able to form treaties with countries such as Iran.“But it needs to be a state of stability, where there is no Hamas, and where it has security and police,” he added. “The state that Trump needs to address is a state of economic prosperity and stability.”He also called for bringing in Jordan and the Arab League as “strategic partners” in guaranteeing the stability a Palestinian state.Such restrictions, particularly regarding Palestinian demilitarization, have featured prominently in other proposals for ending the Israel-Palestinian conflict in the past. Evans added that he emphasized to Trump the importance of improving economic and social stability for the Palestinian population.In addition, Evans has recommended that Trump, should he be elected president, create a US naval base in Haifa as “a permanent deterrent against terror organizations which threaten Israel’s sovereignty with high-trajectory fire.”He said that such a base would also serve US national interests and allow for “a quick response to changing and unexpected challenges in the Middle East.”Evans also addressed the issue of Evangelical support for Trump’s candidacy, as some of his remarks and actions would seemingly put the Republican candidate at odds the values of with a conservative, Evangelical voter.In reference to the Access Hollywood recording of Trump, Evans said that Evangelicals “do not support Donald Trump’s past misbehavior,” referring to it as “disgusting and deplorable,” but asserted that the Evangelical movement was voting based on the respective platforms of the two candidates.“We don’t look at Donald Trump as a pastor, or a Christian – a religious guy. We look at him and ask if he represents the policies we believe in,” said Evans, noting in particular that Trump has adopted a pro-life position regarding abortion, although acknowledging that he had previously identified himself as pro-choice.Evans also said that Trump is committed to nominating conservative judges to the Supreme Court and to strongly back Israel in various ways.The Evangelical leader acknowledged the seeming dissonance between Trump and Evangelical voters, but compared him to Biblical characters such as King David, who had committed sins but nevertheless served God’s purposes.“Donald Trump is an imperfect vessel, like many vessels God has used throughout history... I’m not personally endorsing him,” Evans said. “I support his platform over Hillary Clinton’s platform, I’m not involved in the personalities. I don’t think that everything he says he’s going to do he will do.“On the other hand, I’m not a paranoid person, I don’t think Hillary Clinton is going to be the devil and I don’t think Israel will be destroyed by Hillary Clinton,” he added. “I think she’ll be a good president for Israel, but not as good as Donald Trump.”