Speaking with The Jerusalem Post, Selig said the event's organizers put his name on ​its invitation "without letting me know about it." 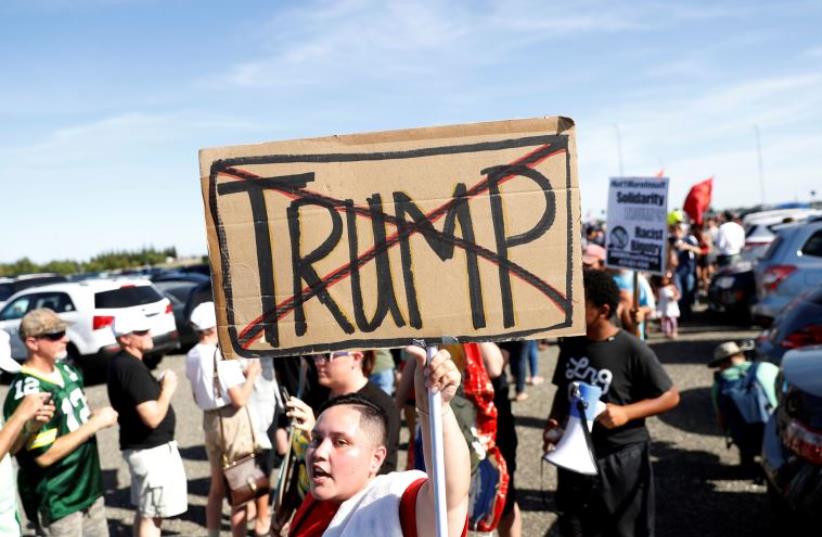 A demonstrator holds a sign against Republican U.S. presidential candidate Donald Trump outside his campaign rally in Sacramento, California
(photo credit: REUTERS)
Advertisement
WASHINGTON – A fellow real estate billionaire of Republican presidential nominee Donald Trump has revoked his support for the candidate after incurring blowback for planning to attend a fundraiser in his name this weekend.Martin Selig, a Jewish property developer who fled Nazi Germany with his family in 1939, originally cast his support for Trump as the default choice of a career member of the Republican Party.“The fact that these are the two people who have been nominated for president, you have to live with that,” he said, in his tepid endorsement of the candidate.Selig has now reversed course, stating that he will not participate in the planned August 30 fundraiser.“Do you know what it’s like being a Jewish Republican in Seattle?” Selig told the Seattle Times. “The repercussions of what you hear from people is stunning.”The phenomenon is not isolated to Seattle, however. Selig, worth an estimated $1.1 billion, was one of few Republican Jewish figures who had announced support for Trump nationwide.While a handful of Jewish hedge fund managers have donated significant sums – including investor Carl Icahn, Trump’s old friend, and Cerberus Capital Management CEO Stephen Feinberg – most major billionaire GOP donors have held out, including Elliott Management Corporation founder Paul Singer, Baupost Group founder Seth Klarman, head of TRT Holdings Robert Rowling, Florida mega auto dealer Norman Braman and CAM Capital chairman Bruce Kovner.Two other executives that had previously planned to co-host the Seattle event, Gordon Sondland and Bashar Wali, have also disavowed the candidate. Lifelong Republicans as well, both Sondland and Wali cited Trump’s treatment of the Khan family as the final straw that forced them to reconsider their support.Speaking with The Jerusalem Post on Monday night, Selig said the event's organizers put his name on ​its invitation "without letting me know about it."​"The Jewish people in this area are mostly Democrat," Selig said, who confirmed he will not attend to the fundraiser. He did not state whether or not he will vote for Trump in November. "That's just what it is. To be ​Jewish and Republican in this area has its complications."​Selig sits on the board of the Republican Jewish Coalition.