The poll was conducted on Thursday of a representative sample of 500 Israelis, with a margin of error of 4.4%. 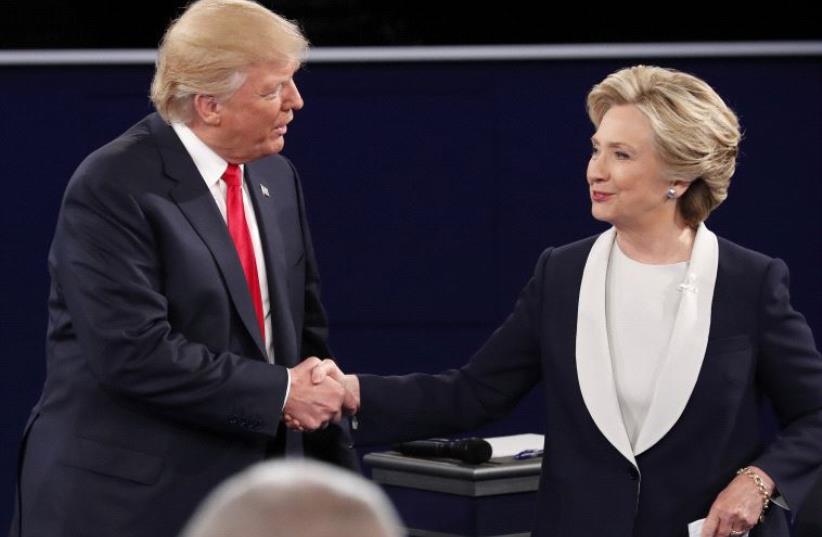 Republican US presidential nominee Donald Trump and Democratic U.S. presidential nominee Hillary Clinton shake hands at the conclusion of their presidential town hall debate at Washington University in St. Louis, Missouri, US, October 9, 2016
(photo credit: REUTERS)
Advertisement
Most Likud voters would prefer Republican nominee Donald Trump as president of the United States, while Zionist Union voters lean more heavily towards Democratic nominee Hillary Clinton.A poll by the Geocartography research institute asked Israelis whom they would choose if they were able to vote for president of the US. Overall, more Israelis support Clinton than Trump, but by a narrow margin of 37%-34%.When the results are divided by which Israeli party they vote for, voters on the Left generally supported Clinton, while those who usually vote for right-wing parties backed Trump.Among Zionist Union supporters, 68% of voters support Clinton, as opposed to 19% who back Trump, while 59% of Likud voters support Trump, and 24% prefer Clinton.Most Bayit Yehudi voters (54%) backed Trump, with only a quarter choosing Clinton, and in Meretz, 78% of voters supported Clinton, while only 11% chose Trump.The exception to the Right-Left rule was Yisrael Beytenu, a right-wing party whose voters preferred Clinton (38%) by a small margin over Trump (34%).Shas voters were almost evenly split, with 39.2% supporting Trump and 40.8% preferring Clinton, while United Torah Judaism voters overwhelmingly (88%) backed Trump, as opposed to only 11% preferring Clinton.In centrist parties, neither candidate received support from a majority of voters, though Clinton was backed by a plurality. In Yesh Atid, more than twice as many (48%) voters support Clinton than Trump (22%), but the number remained below half. In Kulanu, Trump received a quarter of the votes as opposed to 34% for Clinton.The poll was conducted on Thursday of a representative sample of 500 Israelis, with a margin of error of 4.4%.Geocartography President Prof. Avi Dagani said that “Trump broadcasts strength, which represents the views of the Israeli Right, while Clinton’s central messages deal with cooperation and a feeling of togetherness, which are identified with the messages of the Left in Israel.“We see this correlation the further we go to the extremes on the Right and Left, with the exception of Yisrael Beytenu voters who show tolerance, perhaps because of Clinton’s message of tolerance for immigrants,” Dagani posited, referring to Yisrael Beytenu’s popularity among voters from the Former Soviet Union.