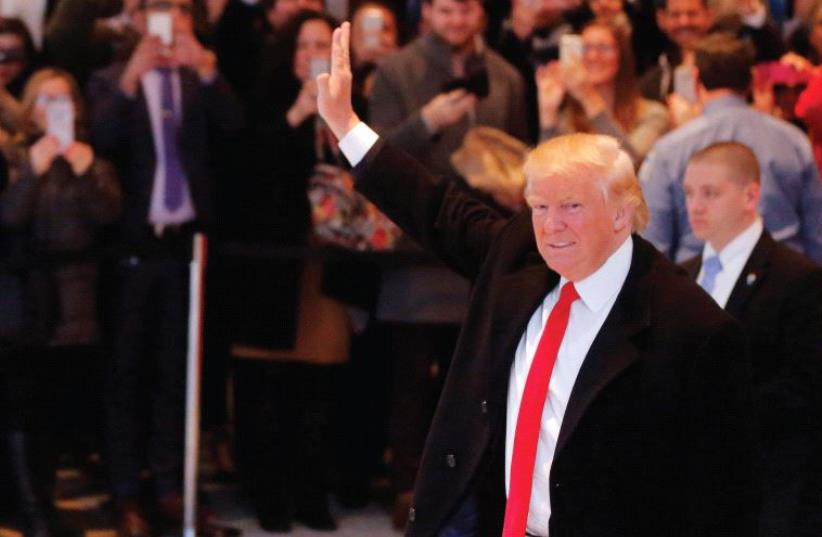 Donald Trump
(photo credit: REUTERS)
WASHINGTON – The race for Donald Trump’s most visible and prestigious cabinet post is playing out like a reality television show, with candidates strutting in public before their ultimate judge – the president-elect – and rising and falling in his favor by the day.After one of his most loyal advocates and confidantes on the campaign trail, former New York mayor Rudy Giuliani, took himself out of the running last week, former Republican presidential nominee Mitt Romney appeared to lead Trump’s highly public race for secretary of state.But a twist appeared, seemingly overnight: A dark horse, Rex Tillerson, CEO of oil and gas giant Exxon Mobil and a foreigner to governing and diplomacy, has suddenly topped the pack.
Trump to name Rex Tillerson as secretary of state
He comes with the sort of gravitas that Trump greatly admires – Tillerson is a selfmade man who rose through the ranks at Exxon with a University of Texas bachelor’s degree in civil engineering.But he also comes with tremendous baggage in the eyes of many senators on Capitol Hill, on whom he would rely for confirmation.Tillerson’s only foreign policy experience is in lobbying against climate change as established science on behalf of the fossil fuel industry and in negotiating a massive oil deal with Russian President Vladimir Putin – a deal that has been halted due to US-led sanctions on Russia over its invasion of Ukraine and annexation of Crimea. Tillerson would be responsible for maintaining, or lifting, those sanctions.There will be only 52 Republicans in the 100-member Senate, and at least three are already publicly questioning Tillerson’s qualifications: Marco Rubio of Florida, Lindsey Graham of South Carolina and John McCain of Arizona. “Being a ‘friend of Vladimir’ is not an attribute I am hoping for from a secretary of state,” Rubio said on Sunday.Tillerson was awarded the Russian Order of Friendship in 2013.Trump took to Twitter on Sunday to address word that Tillerson had already secured the job, which originated from an NBC News report.“Whether I choose him or not for ‘State’ – Rex Tillerson, the chairman & CEO of ExxonMobil, is a worldclass player and dealmaker,” he wrote.“Stay tuned!” NBC also reported that Trump would like John Bolton, a hard-liner on Iran who served as US ambassador to the UN under George W. Bush, to serve as deputy secretary of state under Tillerson.The president-elect spent much of the rest of the day responding to a Washington Post report that the CIA has concluded that Russia actively worked to help elect him, through the hacking and leaking of Democratic Party documents over the course of the 2016 presidential campaign.“Nobody really knows, and hacking is very interesting,” Trump told Fox News on Sunday. “They have no idea if it’s Russia or China or somebody [else]. It could be somebody sitting in a bed some place.”“Ridiculous,” he added, of the CIA’s assessment. “I don’t believe it.”While the CIA believes that Moscow was actively working in Trump’s favor, other agencies question whether Putin’s government was simply working to undermine faith in American democracy. Nevertheless, 17 US military and civil intelligence agencies have concluded that Russia was behind the hacking of the Democratic National Committee and the Clinton campaign.