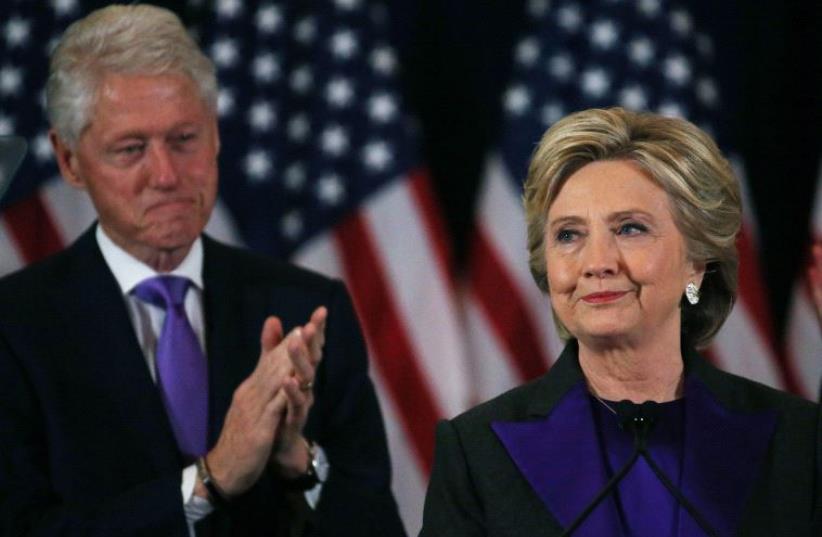 Hillary Clinton, accompanied by her husband former US President Bill Clinton (L), addresses her staff and supporters about the results of the US election.
(photo credit: REUTERS)
Advertisement
What was former US president Bill Clinton doing wearing a kippa on the streets of New York on Sunday night? Attending a Jewish wedding of course!

Bill and Hillary were spotted on Wall Street entering the nuptials of Sophie Lasry and Alex Swieca, dressed to the nines. Bill even color coordinated his kippa to Hillary's dress. Lasry is the daughter of Marc Lasry, a prominent Democratic Party donor and Cathy Cohen. Born in Morocco, he moved to the US and eventually became a billionaire hedge fund manager. Swieca, the son of billionaire hedge fund manager Henry Swieca and Israeli-American Estee Tobaly, is a former quarterback for the University of Michigan. He also represented the Israeli national tackle football team in 2015, and played in the Israel Football League while attending the Young Judea year course in 2011-12.The Clintons weren't the only famous figures in attendance - far from it. Also spotted were Tiffany Trump, Huma Abedin, and even Jennifer Lopez and her boyfriend Alex Rodriguez.