In December, Trump will have to decide whether to move the embassy or to delay the decision another six months. 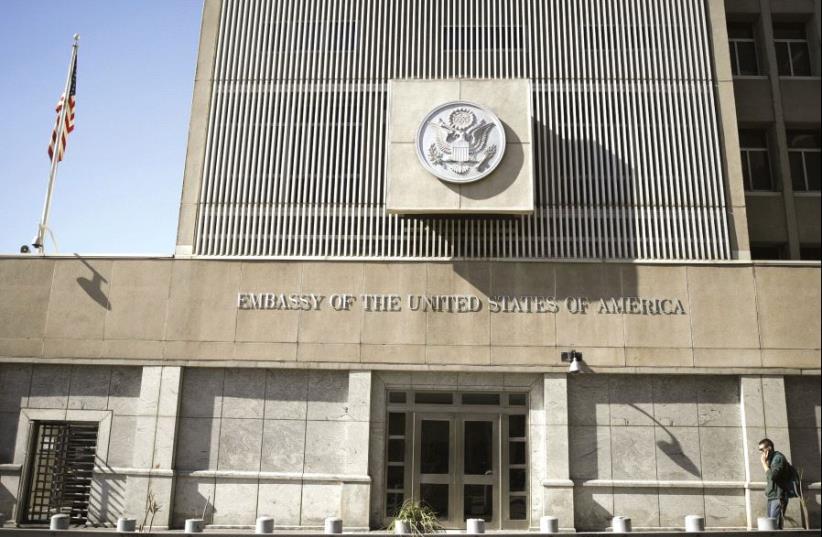 THE FRONT of the US Embassy in Tel Aviv. Will it move to Jerusalem?
(photo credit: REUTERS)
Advertisement
WASHINGTON – A House subcommittee held a hearing on Wednesday featuring four speakers in support of moving the US embassy from Tel Aviv to Jerusalem, and a fifth who expressed skepticism and urged caution.The hearing – scheduled and run by Republican lawmakers that have long called for the embassy relocation – comes shortly before a December deadline for US President Donald Trump to decide whether to order the move or else delay it another six months.A 1995 law requires that the president move the embassy to Jerusalem unless he deems it detrimental to US national security interests. Trump has said he is delaying the move as he explores a potential peace process between Israelis and Palestinians but insists the move is a matter of “when not if.”One speaker who testified before the panel was Dore Gold, a former top aide to Prime Minister Benjamin Netanyahu and the President of the Jerusalem Center for Public Affairs, who highlighted Israel’s protection of holy sites to Jews, Christians and Muslims alike.He said that support for the move in Israel is at an “all-time high.”
Trump delays moving US embassy to Jerusalem (credit: REUTERS)
"They want to put it back on the radar screen when it was taken off the radar screen," Gold told The Jerusalem Post after the hearing adjourned. "We have an administration that wants to do this. We're not pulling wisdom teeth— it's important to clarify this is in the Israeli interest."Gold warned that "radical Islamic groups" were increasingly threatening religious sites that Israeli has successfully protected for decades."There's an impression that the Israeli government doesn't actually want this," he added. "It's important for them to hear Israelis take a strong stand on this."