Intelligence community officials believe it is likely that Trump's conversations with foreign nationals were incidentally collected. 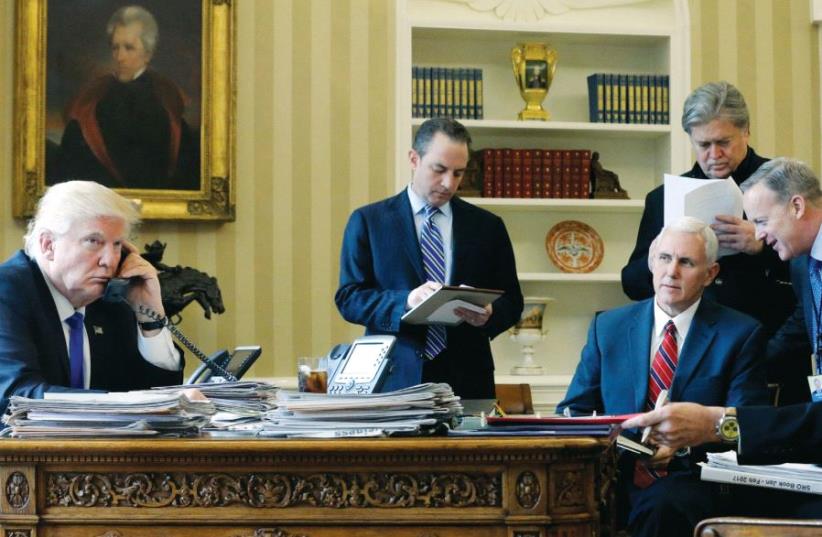 President Donald Trump, joined by (left to right) Chief of Staff Reince Priebus, Vice President Mike Pence, senior adviser Steve Bannon, Communications Director Sean Spicer and National Security Advisor Michael Flynn
(photo credit: REUTERS)
Advertisement
WASHINGTON – Communications between Donald Trump’s presidential transition team and foreign governments were likely intercepted by US intelligence agencies and documented for White House review, including crisis talks held between Trump and Israeli officials in December over a UN Security Council resolution condemning Israel over its settlement enterprise, CNN reported on Monday.
Mystery deepens over Nunes" investigation into Trump"s wiretap claims (credit: REUTERS)
In recent days, House Intelligence Committee chairman Devin Nunes (R-California) has made vague references to information he obtained last week that allegedly lends credence to the president’s assertion he was “surveilled” in the waning days of the Obama administration.There is no evidence that then-president Barack Obama ordered the direct surveillance of his successor, as Trump alleged in a series of tweets on March 4. But intelligence community officials believe it is likely that Trump’s conversations with foreign nationals were incidentally collected, as he was reaching out to individuals legally under surveillance.Such individuals likely include senior members of the Israeli and Egyptian governments, CNN’s Evan Perez, a justice correspondent, reported. In December, the president-elect and his team intervened aggressively to stop what appeared to be an orchestrated effort to shepherd the UN resolution through to a vote.Cairo pulled its critical support from the measure at the last minute, after Trump urged Egyptian President Abdel Fattah al-Sisi to back down. Nevertheless, the resolution ultimately passed.Such high-level conversations are most “definitely” collected by US intelligence agencies, and are likely elevated to the White House for review, Perez claimed.Presidential transition teams typically work in conjunction with the State Department before logging calls with foreign leaders and dignitaries – a process meant to aid the president- elect and maintain policy cohesion across governments. Trump chose not to coordinate his transition period diplomacy with the State Department, raising the likelihood that his calls with foreign leaders were surveilled.