Trump calls on Putin to distance Russia from Syria and Iran 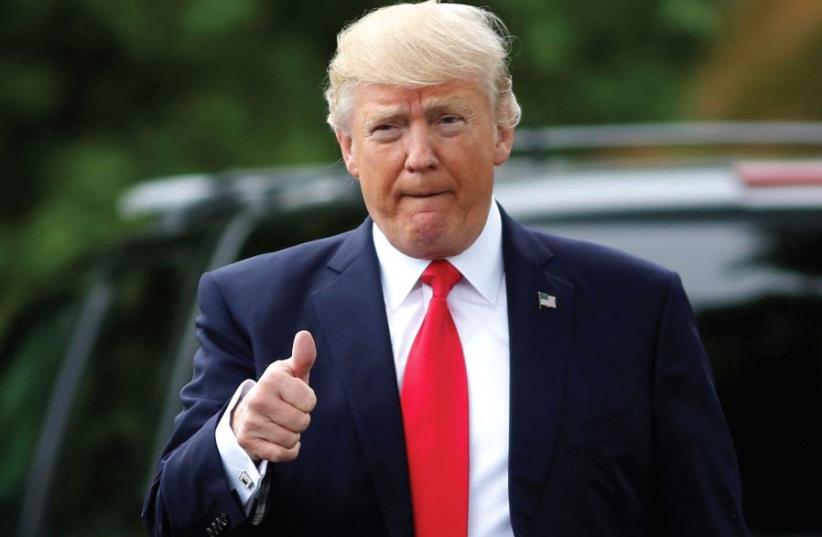 Donald Trump
(photo credit: REUTERS)
Advertisement
WASHINGTON – Arguing that the West is engaged in an existential struggle with enemies of freedom, President Donald Trump on Thursday called for a coalition of “civilized” nations to reinforce its will to defend itself “at any cost” – and on Russia to join the battle by distancing itself from Syria and Iran.Speaking from Warsaw to the people of Poland one day before his first in-person meeting with Russian President Vladimir Putin, the US president accused Moscow of engaging in “destabilizing activities” across the world.“We urge Russia to cease its destabilizing activities in Ukraine and elsewhere, and its support for hostile regimes, including Syria and Iran, and to instead join the community of responsible nations in our fight against common enemies, and in defense of civilization itself,” the US leader said.It was rare criticism of the Russian government from Trump, and an evolution in his characterization of the Syrian civil war: He has rarely acknowledged that Moscow and Tehran have found common cause in defending Syria’s brutal president, Bashar Assad, or explained the consequences that linkage might have on his evolving Russia policy.Trump campaigned for president employing aggressive language against Iran, but promising to engage with Russia in Syria, where both nations have actively supported Assad with military aid. White House aides say that Trump has since sobered on Russia’s role in the war, as he has grown into the presidency.US Secretary of State Rex Tillerson said that Syria will be a focal point of Trump’s highly anticipated meeting with Putin on Friday.“The United States believes Russia, as a guarantor of the Assad regime and an early entrant into the Syrian conflict, has a responsibility to ensure that the needs of the Syrian people are met, and that no faction in Syria illegitimately retakes or occupies areas liberated from ISIS’s or other terrorist groups’ control,” Tillerson said in a statement. “Russia also has an obligation to prevent any further use of chemical weapons of any kind by the Assad regime. If our two countries work together to establish stability on the ground, it will lay a foundation for progress on the settlement of Syria’s political future.”Iran and Russia are the only two significant backers of Assad, who has presided over a civil war that has killed more than 500,000 people, displaced 14 million, and provided feeding grounds for terrorist groups. Assad’s deployment of chemical weapons against women and children, and the discovery of crematoria used to cover up war crimes at the detention facility of Sednaya, personally affected Trump and changed his calculus on the war.Trump ordered in April a broad review of US policy toward Iran that is currently under way at the State Department. But speaking in Riyadh in May, he characterized the Islamic Republic as the central agitator in the region’s many conflicts: a government that provides terrorists “safe harbor, financial backing and the social standing needed for recruitment.“Among Iran’s most tragic and destabilizing interventions have been in Syria,” he told leaders of the Arab world. “Bolstered by Iran, Assad has committed unspeakable crimes.”Now speaking in Europe, Trump has taken a step further by accusing Moscow of similar culpability in the Syrian tragedy. Yet he did so with an outstretched arm, offering Russia a role in his struggle to save “civilization itself,” against the forces with which Moscow is currently aligned.“We have to remember that our defense is not just a commitment of money, it is a commitment of will,” Trump said on Thursday, in a speech that his senior advisers characterized as “very philosophical.”“The fundamental question of our time is whether the West has the will to survive,” the US president continued. “Do we have the confidence in our values to defend them at any cost? Do we have enough respect for our citizens to protect our borders? Do we have the desire and the courage to preserve our civilization in the face of those who would subvert and destroy it?”