Dermer blasts 'narrative' of a moderate Iran and a peaceful Palestine 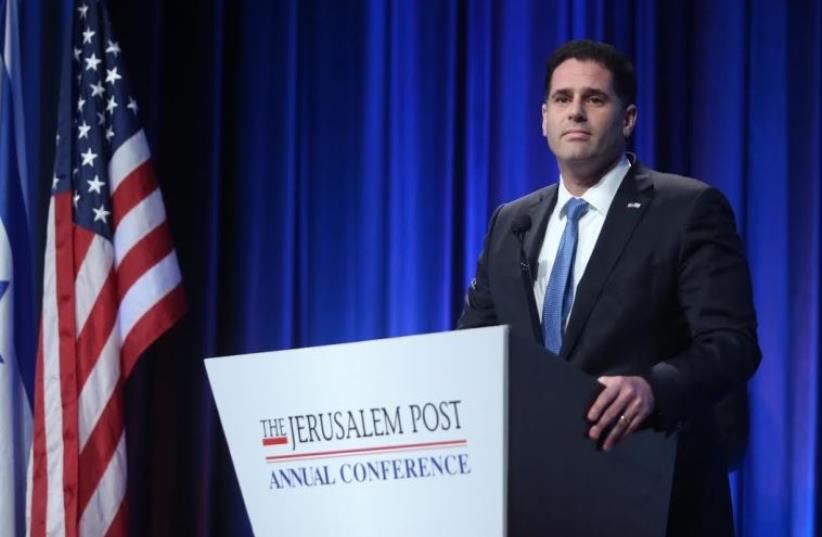 Israel's Ambassador to the US Ron Dermer
(photo credit: MARC ISRAEL SELLEM/THE JERUSALEM POST)
Advertisement
NEW YORK -- Israel's ambassador to the United States slammed on Sunday the "fiction" that a partner for peace exists within the Palestinian Authority, warning of a hostile reaction from Jerusalem to any effort to impose terms of a two-state solution through international bodies.Addressing The Jerusalem Post's annual conference in New York, Ron Dermer, a close confidante to Prime Minister Benjamin Netanyahu, said that world powers supporting an initiative by France to outline parameters for peace between Israel and the Palestinians are "ignoring the will of the free people who live in the most endangered democracy on Earth." "These powers, albeit with the best of intentions, will only encourage the Palestinians to continue their 100 year campaign to destroy the one and only Jewish state," Dermer told the crowd."Such an effort will not only prevent peace today," he said, but could prevent peace "for decades to come" and bolster international efforts to delegitimize Israel.Dermer, one of Netanyahu's most articulate advocates, repeated a theme common in his speeches: That the decades-old conflict between Israel and the Palestinians is largely misunderstood. He rejected the narrative paradigm that Israel is an occupying force avoiding peace negotiations, seeking to ethnically cleanse Arabs from historic Palestine and insidiously constructing settlements toward that end.On the contrary, he argued the conflict took root long before the construction of a settlement bloc, and that six of Israel's past prime ministers have offered generous peace terms to Palestinian leadership, to no avail. "The conflict pre-dates the building of settlements by at least 50 years," he said.Dermer warned that world powers supporting France's initiative would "unwittingly enable" Palestinian leadership to continue avoiding genuine negotiations.And extending the structure of his speech, contrasting facts with fiction, Dermer also slammed the "narrative" that Iran is divided between moderates and extremists, and that a nuclear deal reached with the country last year will empower its better angels.In a world of fiction, Iran will "become a partner" of the US in its fight against Islamic extremism, he said, mockingly. "In a world of fiction, a richer Iran will curb its aggression, end its support for terrorism." And yet he argued that, since the Joint Comprehensive Plan of Action was implemented, the opposite has proven true: Iran's regime continues to suppress its own people at home, hanging gays and stifling speech, and has– according to Dermer– expanded its network of proxy militias around the world."Despite being the most maligned country on Earth, Israel is the most remarkable country on Earth," Dermer added. Because Israel, he said, is not a fiction: It is a real country, with real people.