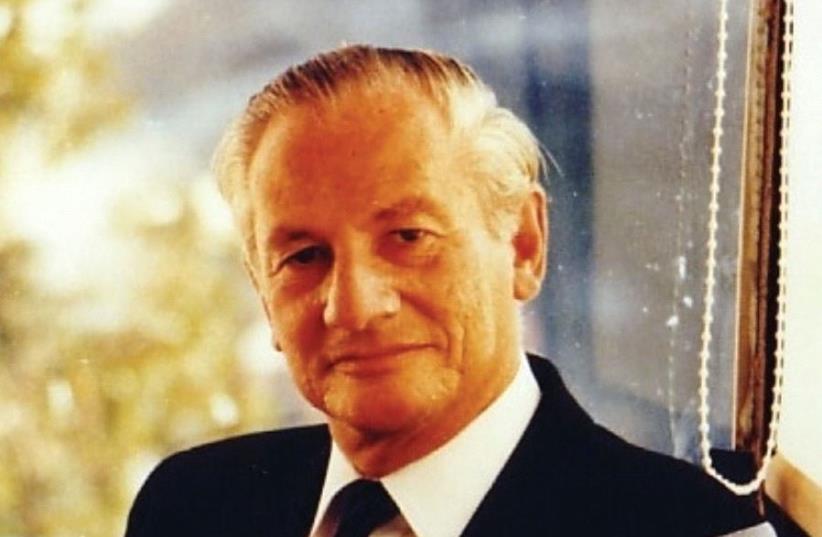 Former Supreme Court Justice Gabriel Bach
(photo credit: Wikimedia Commons)
Advertisement
As the second main lawyer in the Adolph Eichmann trial and the lead justice in the historic Demjanjuk decision, former Supreme Court Justice Gabriel Bach was the ideal figure to be the founding chair of the committee that picks EMET Prize award winners.The prize is given annually for excellence in academic and professional achievements in art, science and culture that contribute in a significant manner to society.Bach, who served as founding chair until 2009, said, “It is a very good thing to give public recognition to excellent people” for achievements that positively influence society.He says he has always enjoyed participating both in the backroom discussions about who to choose as the winners as well as the actual event where the organization bestows the awards.It was not always easy to choose from among so many good candidates, Bach said, but that the number of prizes each year are limited and he found satisfaction from each winner.“It was enjoyable to pick all of them,” says Bach.Prosecutor Gabriel Bach speaks at Nazi war criminal Adolf Eichmann’s trial in Jerusalem in 1981 (Wikimedia Commons)Bach has not always been fortunate enough to focus his attention on heroic figures trying to improve society, though.In fact, two of the cases for which he is most famous for include two of the greater monsters of Israel’s past.Starting as a state prosecutor in 1953, Bach became deputy attorney-general in 1961 and the second of three prosecutors in the landmark trial Eichmann trial.He recounts, “There have been many special things in my life, but there was never anything quite as special” as the Eichmann trial.During the nine months leading into and during the trial, Bach recalls, he moved from his home to Haifa and lived in a hotel near Eichmann’s Yasgur prison.Bach says his first meeting with Eichmann is still crystal clear in his mind.He says he told the police that he could not discuss the content of the case with Eichmann, lest he unwittingly become a witness, but could facilitate issues relating to the case.For example, Eichmann asked me, “Who should I have as a defense lawyer?” “His wife had suggested Robert Servatious, who defended Nazis at the Nuremberg trial. I said that would not be a problem, and that he was definitely a big expert,” states Bach.Yet even as Bach remained focused on his role, he says that “sitting only one meter from him, it was very hard to stay calm.”Next, Bach recalls the German government’s “efficiency in sending every file from every ministry and army unit – millions of documents. I split it all up among the police and assigned officers so everyone was looking at different documents.”Coming into contact with Eichmann the human and his case files, he says he “kept dreaming that maybe Eichmann would sometimes let Jews go in unique circumstances.But every single time he had them killed,” no matter what the special nature of the request was.Giving the example of a professor who lived in Paris who owned and had knowledge related to patents for radar technology that the German army wanted to question the professor about, a German general asked Eichmann whether the professor and his wife could be spared due to their usefulness.Eichmann said “no,” says Bach.Describing the exchange, Bach says the general wrote, “I am the general of a large portion of the army” and that he wanted the Jewish professor spared. Eichmann responded, “I am a commander in the SS and I don’t care what your rank is. The German army already took the patents. Not even a oneday extension can be granted.”Bach says Eichmann won, like countless other times, and sent the Jewish professor to his death.During the Eichmann trial, Bach remembers that an American woman traveled to Israel, approached him and said that she was the daughter of that professor, that her parents had sent her to non-Jewish neighbors and she eventually got to the US.“I read in the US about your case with my parents’ names. I didn’t know them and do not even have a picture of them – can you help?” In a quirk of history, Bach, Eichmann’s prosecutor, later became Nazi guard Ivan Demjanjuk’s savior and releaser when he led a 1993 three-justice panel of the Supreme Court to order Demjanjuk’s release due to mistaken identity evidentiary issues.Though originally convicted by a lower Israeli court as a Nazi guard at the Treblinka death camp, the Supreme Court under Bach said that none of the witnesses could identify him as that guard. Also, the new evidence that was a different Nazi guard named Ivan at the death camps of Sobibor and Majdanek could not be presented when he had not had a chance to defend against that evidence in the lower court trial.Bach says he had no second thoughts about that decision even after significant domestic criticism.In fact, Bach states that the decision impressed most of the world as to Israel’s court system’s independence and capability for justice over just getting emotional revenge.The former justice did say he also got some satisfaction knowing that decades later, in 2011, Demjanjuk was convicted of being the Nazi guard at Sobibor and Majdanek, shortly before dying of old age.Between Bach’s achievements and the achievements of Emet Prize winner picked by Bach, Israel has much to be proud of.