Cotton, a forceful advocate for Israel and an ally of the current Israeli government, spoke on a panel with Republican Senator Deb Fischer from Nebraska. 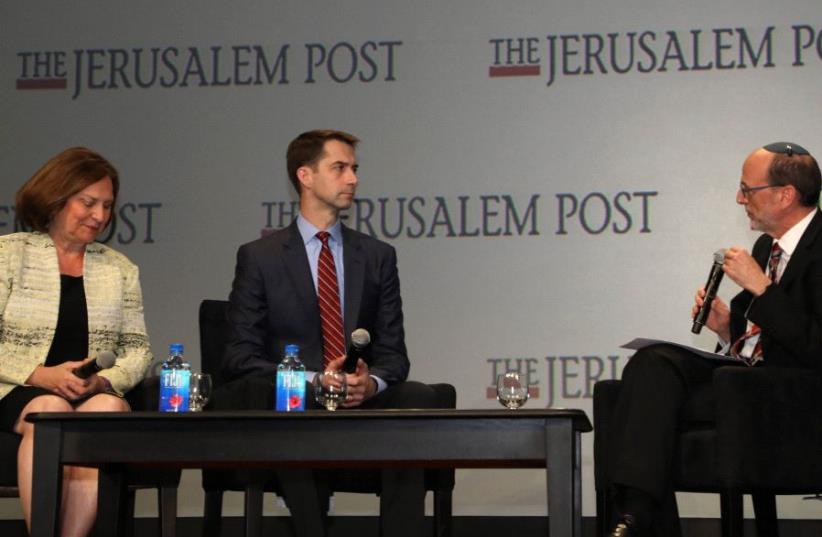 Republican Senator Deb Fischer (left) and Senator Tom Cotton, a Republican from Arkansas at The Jerusalem Post's annual conference in New York
(photo credit: SIVAN FARAG)
Advertisement
NEW YORK – The reach of Jewish communities worldwide has proven a unique intelligence asset for the State of Israel – and for its allies, a senior lawmaker on the US Senate Select Committee on Intelligence said on Sunday.Speaking at The Jerusalem Post Annual Conference in New York, Sen. Tom Cotton, a Republican from Arkansas, said Israel’s relationship with the Jewish diaspora allows it to peer into regions of the world that are otherwise difficult for intelligence agencies to penetrate.“It’s a lot easier to find Jews in every country around the world than it is to find Americans in some countries,” Cotton said. “The relationships that citizens of the nation of Israel have with that diaspora – many of whom have come, for example, from the old Soviet republics once they gained independence in the early 90s – gives Israel some unique advantages that most countries don’t have when they’re trying to identify threats from overseas.“Both the technical skills of Israelis as well as the worldwide relationships, because of the Jewish diaspora, gives Israel some advantages that virtually no other country or institution anywhere in the world has as well,” he said, adding that, “often times, it has a secondary benefit for Israel’s allies.”Cotton, a forceful advocate for Israel and an ally of the current Israeli government, spoke on a panel with Republican Sen. Deb Fischer from Nebraska.She also praised Israel for its intelligence gathering capabilities, and characterized the state as an “unsinkable aircraft carrier” from which allied forces can launch operations into the greater Middle East.“I hope Israel hasn’t become a partisan issue – that certainly doesn’t help anyone,” Fischer said, characterizing the fundamental bond between the two nations as one of shared liberal democratic values.Both senators praised US President Donald Trump for choosing Saudi Arabia, Israel and the Holy See as his first foreign visits since taking office.The White House says the president hopes to send a message of religious tolerance by visiting three religiously significant capital cities – Riyadh, Jerusalem and Rome – beginning on May 19.“I think it’s a very good sign,” Cotton said. Fischer called the itinerary a “smart move” on the part of the White House.“This is the first time since Jimmy Carter took office in 1977 that a president’s first trip is not either Canada or Mexico.”“It goes to show that after eight years of trying to withdraw from the Middle East, that is no longer the case under President Trump,” he said.Danielle Ziri and Herb Keinon contributed to this report.