Reporter's notebook: A mosaic of Israel and America on display in NYC 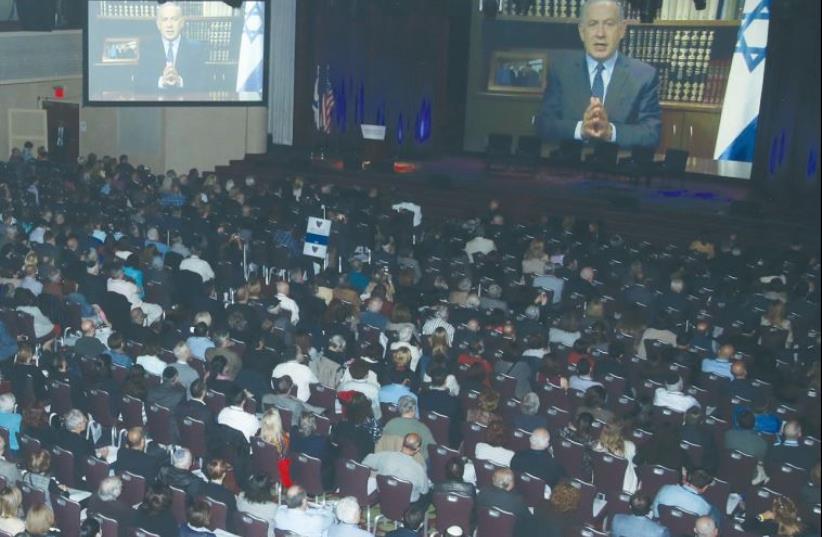 ATTENDEES AT The Jerusalem Post’s fifth annual conference in New York listen to a pre-recorded address from Prime Minister Benjamin Netanyahu yesterday.
(photo credit: MARC ISRAEL SELLEM/THE JERUSALEM POST)
Advertisement
NEW YORK – The f-word was conspicuous by its absence at Sunday’s Jerusalem Post Conference in New York. Not that f-word, the other one – fascism.With both former prime minister Ehud Barak and newly resigned defense minister Moshe Ya’alon both recently alluding to fears that Israeli society and leadership was showing traces of democratic fracture, the topic is a vital one that anyone who cares about Israel should be addressing.There were some scrappy comments surrounding the current coalition shakeup, courtesy of Yesh Atid MK Elazar Stern who rebuked Internal Security Minister Gilad Erdan for criticizing Ya’alon’s decision to drop out of the government instead of moving over to the Foreign Ministry.Erdan also took a swing, scoffing at “the Left” for a “sky is going to fall” mentality over Yisrael Beytenu leader Avigdor Liberman’s impending appointment as defense minister.But through the first half of the Fifth annual conference, rather than sparring over coalition high jinks, the focus was more on the fight against BDS and the future of the Jewish people.The audience, a well scrubbed mix of New York Israel-centric residents, Jewish professionals and a smattering of Israeli visitors, were there because of their love for and interest in Israel. But the demographics also pointed to a problem facing the future of relations between Israel and US Jewry.World Jewish Congress President Ronald S. Lauder and Stern both stressed the importance of investing in the next generation of Jewish leaders, and recalled how most young American Jews are first exposed to information about the Israeli-Palestinian conflict when they go away to college.But looking through the audience, it was hard to identify anyone under 35, a phenomenon consistent with the well-researched disengagement of young American Jews from identifying with Israel.That is obviously a function of cost, but it’s also a function of the diminished interest that Lauder and Stern alluded to – it’s not so easy to attract a crowd of young people to come hear a bunch of speeches and panels about BDS and Iran.Speaking of Iran, the other word conspicuous by its absence at the conference as opposed to years past was Israel’s arch nemesis. With the US-Iranian deal on the books and the long battle waged by Prime Minister Benjamin Netanyahu against the deal now a footnote of history, it didn’t garner much play.US diplomat Dennis Ross touched on the issue, but only in the context of how the Gulf-Arab countries care much more about the Iranian threat than the Israeli-Palestinian conflict.Ross, a longtime US negotiator between Israel and the PA and ground floor Oslo Accord proponent, was greeted warmly by the crowd, even when mentioning President Barack Obama – a moment that prompted catcalls and boos at last year’s conference when Treasury Secretary Jacob Lew spoke amid the divisive Iran debate.The sparks flew instead, during the discussion between the Post’s former editor-in-chief Steve Linde and famed sexologist Dr. Ruth Westheimer, who made Linde blush repeatedly with her spicy comments on couples and intimacy.Westheimer spoke shortly after a discussion between Linde and Hollywood legend Michael Douglas, who spoke emotionally about the process that has brought him closer to Judaism and Israel.Westheimer, Douglas, Erdan, Ross – what do they have in common? On the surface nothing, but what brought all of them to New York on Sunday was an identification with Israel and a desire to better the future of Israel and the Jewish people.The challenge is how to expand that discussion to include more Americans and instill in them a sense that they, too, can have a stake in Israel as it faces its growing pains and copes with continued threats.By bringing the diverse group of speakers and a hall full of engaged audience members together to grapple with those issues, the Jerusalem Post Conference goes a long way to stitching new ties that will bode well for both peoples.Transmitting that message to a new generation is not going to happen overnight. But despite the lack of young voices, the fact that the problem is on the agenda is a good sign.