Palestinian and bright yellow Fatah flags were waving in every direction surrounding the body of Abu al-Ezz, as more participants joined the masses. 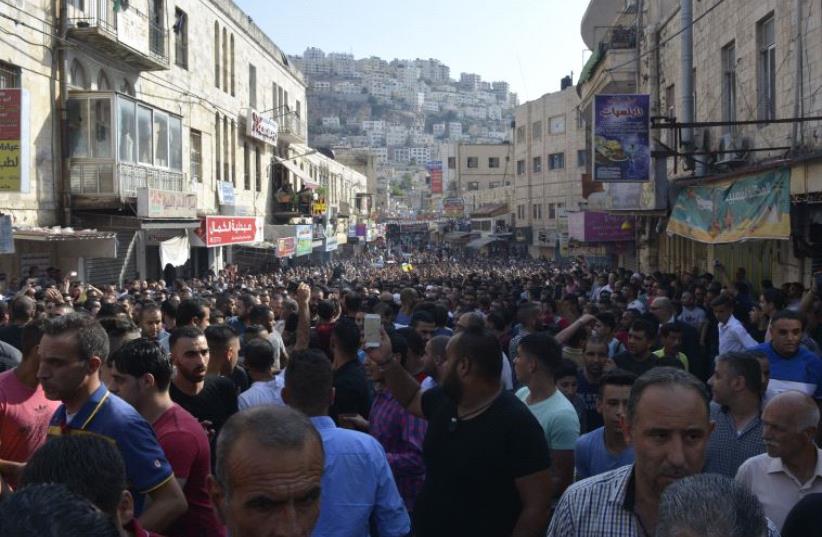 Thousands of participants in a funeral procession march on main thoroughfare in Nablus.
(photo credit: UDI SHAHAM)
Advertisement
“With our blood and soul, we will sacrifice ourselves for you, oh Abu al-Ezz,” some 12,000 mourners chanted at a funeral procession in Nablus on Sunday that turned into a demonstration against the PA.“Oh PA, why, why, we have been killed by the [Israeli] army and now by you,” the participants continued, furious about the death their comrade, Ahmed Halawa (aka Abu al-Ezz).Palestinian and bright yellow Fatah flags were waving in every direction surrounding the body of Abu al-Ezz, as more participants joined the masses.Halawa, a former leader of Fatah’s Aksa Martyrs Brigade and captain in the Palestinian Police, was suspected of being the mastermind behind the killing of two Palestinian Authority security personnel on August 18. After initiating a security operation in Nablus, PA forces arrested Halawa and brought him to the city’s Jneid Prison, where security personnel allegedly beat him to death provoking popular condemnations.“You [Palestinian] Authority of spies, we don’t want [Akram] Rajoub or [Mahmoud] Abbas to be president... We have had enough, Nablus get cracking,” the participants shouted.The participants continually attacked PA President Mahmoud Abbas, Nablus Gov.Akram Rjoub and Prime Minister Rami Hamdallah, calling for them to be held accountable.Nablus, whose nickname is Jabal al-Nar, the Hill of Fire, witnessed some of the most intense violence during the second intifada, and more recently has seen increased instability and an uptick in armed clashes between gunmen and the PA security forces. 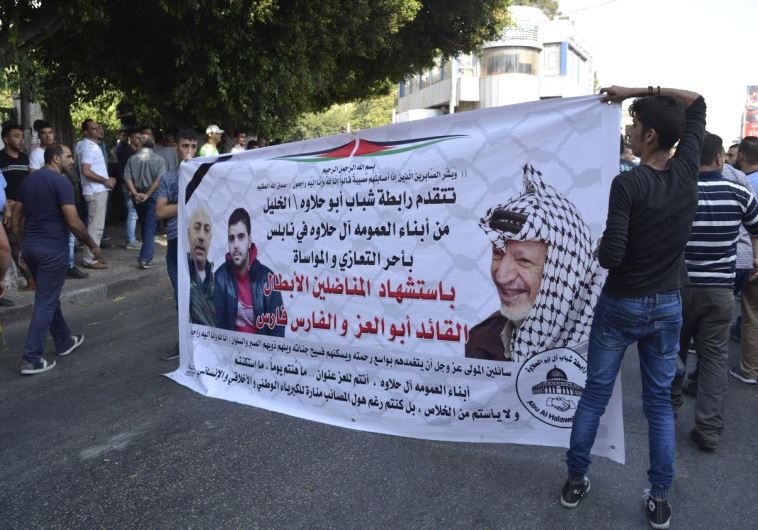 Young Palestinians raise poster, offering condolences to Halawa family. (Credit: Udi Shaham)Najat Abu Bakr, a Palestinian Legislative Council parliamentarian, marched alongside the thousands of protesters and told The Jerusalem Post that Halawa intended to turn himself in to the PA law enforcement.Yet, she claimed, “Halawa was killed in cold blood.”Abu Bakr, who has harshly criticized Abbas and hid in the PA parliament building in Ramallah fleeing arrest for accusing the PA minister of local governance of corruption in March, said that international parties need to intervene to hold Halawa’s killers to account.“International investigative committees need to be formed to hold the perpetrators of Abu al-Ezz’s death accountable,” she said. “The PA will not take the necessary measures to ensure justice is served.”Samir al-Saber, a Nablus resident, calmly walked at the back of the procession and told the Post that Halawa represented the city’s highest values.“He gave everything for this city, and was a fighter in the resistance.What happened is indescribable.Halawa was killed in a barbaric way.”Adly Yaish, the head of the independent, Fatah-backed Nablus for Everyone list who is running for mayor in the October 8 municipal election, also joined the thousands in the street, expressing his criticism in a softer tone.“The killing of Halawa was unacceptable,” Yaish, who enjoys considerable popularity in Nablus, told the Post. “He should have been given a fair trial.”The mayoral candidate stated further that he hopes Nablus will be able to overcome the ongoing tensions. “God willing, the situation will become calmer in the coming days,” he said.The Halawa family had agreed to a specific route from Refidiya Hospital to the cemetery in downtown Nablus for the funeral procession, which notably avoided Nablus’s Casbah, the Old City, where many of the Halawa family live.During the procession, the pall bearers largely followed the route and brought Halawa’s body to the cemetery.However, hundreds of protesters broke off from the masses and entered the Casbah. There, PA security personnel armed with riot shields and automatic weapons clashed with the protesters, eventually dispersing them with tear gas.“I can’t open my eyes, I can’t open my eyes,” yelled one Nablusian youth, running away from the tear gas.Since the outbreak of violence in the West Bank’s second-largest city, many top officials and local personalities have called for the postponement of the municipal election in Nablus for four weeks in a letter to PM Hamdallah. The PA prime minister rejected the request, and four independent lists subsequently registered last Thursday to run in the election.Yaish said on Sunday that he hopes the election will take place.“God willing, the election will happen,” he said.