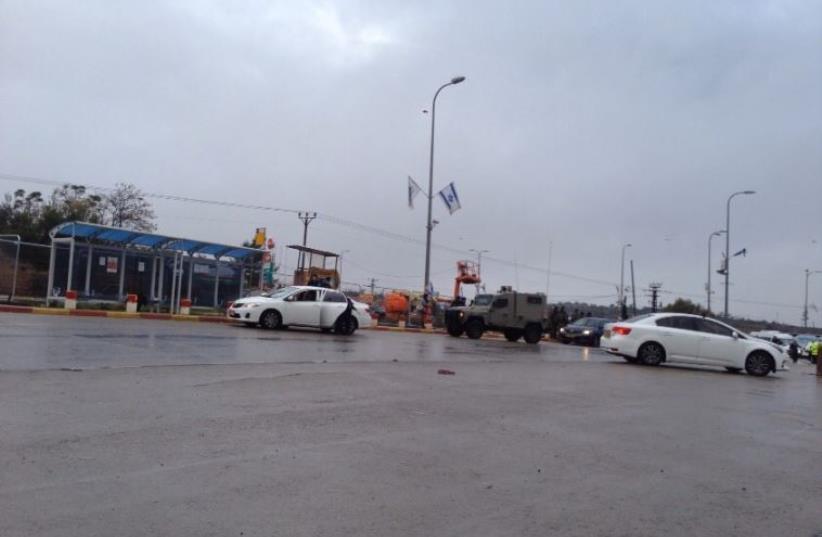 Scene of attempted stabbing attack at Gush Etzion Junction
(photo credit: MICHAEL HAREL)
Advertisement
A Palestinian teenager and a woman who attempted to stab Israelis on Tuesday were shot dead by the IDF in separate incidents in the West Bank.Ma’moun Raed al-Khatib, 16, of the Douha suburb of Bethlehem, was shot and killed by an IDF soldier on guard at the Gush Etzion junction as he tried to stab another IDF officer with a knife.Palestinian sources said al-Khatib was a 10th grader and had been a close friend of another Palestinian youth who was shot and critically wounded while attempting to stab a soldier last month. Al-Khatib had chosen his wounded friend’s photo as his profile picture on Facebook.An Israeli civilian who was in the area sustained a light wound from bullet shrapnel, an IDF spokeswoman said. He was treated at Hadassah University Medical Center in Jerusalem’s Ein Kerem.A few hours later, a Palestinian woman with a knife tried to stab an IDF officer at Einav Junction in the northern West Bank and was shot and killed at the scene. There were no injuries among security personnel.The Palestinian Authority Health Ministry identified the woman as Maram Ramez Hasouneh, 20, and said she was killed by IDF soldiers near Tulkarem.Hasouneh, a university student from the Rafidiya suburb of Nablus, had previously served seven months in Israeli prison for security-related offenses. Ma’an, the Palestinian news agency, said she had done time for attempting to stab a soldier at the same checkpoint two years ago.In a separate incident on Tuesday night, soldiers shot and wounded three other Palestinians who threw several firebombs at the Pillbox security point in Hebron’s Tel Rumeida area, an IDF spokeswoman said.The men fled the scene and were spotted being picked up by a Red Crescent ambulance nearby, the IDF said. There were no reports of any Israeli injuries in the incident.Earlier this week, former national security adviser to Prime Minister Benjamin Netanyahu, Maj.-Gen. (res.) Yaakov Amidror, said little can be done to prevent the lonewolf Palestinian terrorism that has plagued the country the past couple of months.Calls for a “massive military campaign” and for the IDF to “seize Judea and Samaria” are “nothing but empty words,” Amidror said. “There is no need for a massive military campaign, as Operation Defensive Shield in 2002 established the IDF’s control over Judea and Samaria, and Israeli forces are free to operate anywhere in the area,” he said.Overnight Tuesday, IDF troops along with Border Police forces and local police units arrested 14 Palestinians in a West Bank raid.The suspects were arrested under suspicion of terrorist involvement and for violence against the civilian population and security forces. The suspects have been transferred for questioning.Allyn Fisher-Ilan contributed to this report.