The main defendant in one attack is Ahmed Najar, a Hamas operative who was serving six life sentences when he was released as part of the Schalit deal. 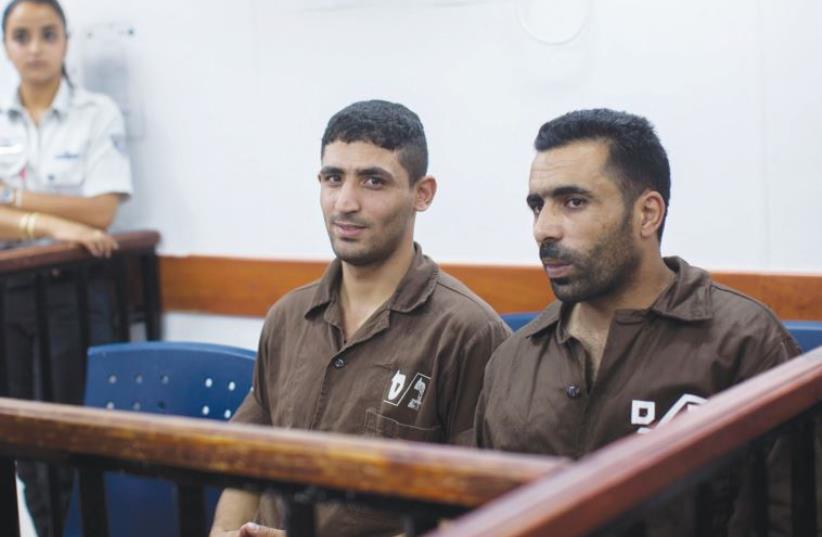 Two of the three terrorists indicted at Ofer military court yesterday for their alleged involvement in the murder of Danny Gonen this June.
(photo credit: YONATAN SINDEL/FLASH 90)
Advertisement
The IDF prosecutor for Judea and Samaria filed indictments with the Judea Military Court on Monday against seven Pal - estinians allegedly involved in the West Bank shooting deaths Malachi Rosenfeld and Danny Gonen.Rosenfeld, 27, of Kochav Hashahar, was shot in late June near the settlement of Alon Shvut, about 45 kilometers north of Jerusalem, as he and three friends were returning from a basketball game at a nearby settlement.According to security officials, more than a dozen bullets were fired into their vehicle from a passing car. All four were wounded; Rosenfeld died the next day at Shaare Zedek Medical Center in Jerusalem.Gonen, 25, of Lod, was shot dead in mid-June near Dolev, a settlement some 30 km. northwest of Jerusalem, after he and a friend were waved down by a Palestinian man on the side of the road. The man then shot them with a 9 mm. handgun at point-blank range.The Jerusalem Post has learned that the main defendant in the Rosenfeld attack is Ahmed Najar, a Hamas operative who was serving six life sentences when he was released as part of the deal struck for the return of soldier Gilad Schalit.Najar, who currently resides in Jordan and has not been arrested, telephoned his brother, Amjan, who is under indictment and in Israeli custody, and instructed him to carry out the attack. Amjan Najar planned the shooting along with three others who are under indictment and in Israeli custody, and purchased weapons with funds supplied by his brother.The alleged shooter is in the custody of the Palestinian Authority.The same terrorist cell was involved in an attack on an ambulance near the Beit El settlement a few days before the murder of Rosenfeld.The alleged shooter in the Gonen attack is Muhammad Abu Shaheen, who is in Israeli custody.Shaheen is said to have begun carrying the handgun he used in that attack in 2013, and as of April 1, 2014, he had made several failed attempts to murder Jews. In one incident, near Kikar Adam, north of Jerusalem, he approached a car, pointed his gun at the driver and at almost point-blank range pulled the trigger. The weapon jammed.Shaheen is also said to have fired on several soldiers during various operations in Kalandiya, just north of Jerusalem. In one incident, he shot off a soldier’s finger. Afterward, he telephoned police and admitted his involvement, hoping they would be able to pinpoint his location via his cellphone signal, allowing him to ambush them.Most of those under indictment for the Rosenfeld and Gonen killings are charged with murder or aiding and abetting a murder. One was charged with manslaughter, as he was not directly involved in either attack but knew about them in advance and failed to warn the authorities.Initially, Prime Minister Benjamin Netanyahu and Defense Minister Moshe Ya’alon blamed the Palestinian Authority for the attacks.There have been numerous terrorist attacks in the West Bank and Jerusalem since June, with a spike in incidents last week. They have led to a heavy increase in security measures.There have been protests outside the prime minister’s official residence claiming that the state was failing to protect its citizens. There also have been calls by Knesset members to expedite controversial anti-terror legislation.