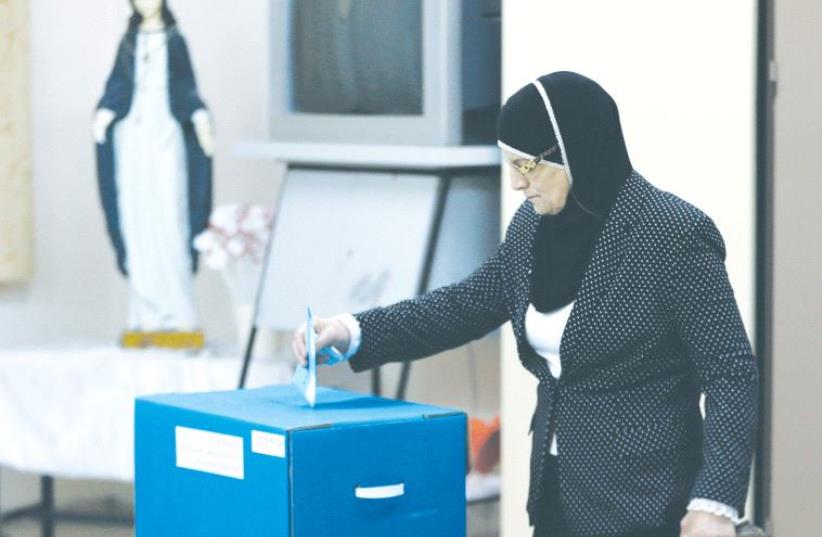 AN ISRAELI ARAB casts her vote at a polling station inside a church in the northern village of Reina on March 17, 2015.
(photo credit: REUTERS)
Advertisement
PA President Mahmoud Abbas interfered in Israel’s last election, in March 2015, asking an Arab-Israeli mayor to increase votes for the Joint List, official sources in Jerusalem told Israel Radio.Abbas called Nazareth Mayor Ali Salam on Election Day and urged him to push residents to vote for the Arab-dominated Joint List. The official sources said they have information that confirms this.However, PA official Muhammad al-Madani, who organizes meetings with Israeli society, denied the claim by the Nazareth mayor that a conversation took place between him and Abbas. The PA accuses Salam of inventing the story for political motives, according to the Israel Radio report aired on Wednesday.Prime Minister Benjamin Netanyahu released YouTube videos in Hebrew and English with Arabic subtitles last week addressing the country’s Arab citizens, and apologizing for controversial remarks made during the 2015 election when he called for right-wing voters to turn out by warning that Arabs were “going en masse to the polls.”“I said Arab voters were going to the polls in droves,” he said in Monday’s video. “I was referring to a specific political party, but many people were understandably offended.”In light of the new report, it seems that Netanyahu was correct in noting that Arab voters were “going to the polls in droves.”The Nazareth mayor told Israel Radio on Tuesday that because of his enlistment efforts, turnout jumped from 20 percent at midday to 90 percent by the evening.Salam has a history of tension with the Joint List.In October, Salam shouted at Joint List head Ayman Odeh one night to leave his city, as the MK was about to be interviewed live on Channel 2.“Ayman, you need to go elsewhere, you’ve destroyed our city!” Salam yelled at Odeh from his car, which pulled up next to Odeh standing on the sidewalk in front of the television camera.“Get out of here. Enough with the interviews!” shouted Salam. “You all have destroyed everything! Go back to Haifa!... What are you being interviewed about? What are you doing to us? You are doing nothing!” shouted Salam.Odeh, for his part, remained quiet but appeared to be greatly irritated.The sharp confrontation followed accusations by Salam earlier that day in an interview on Army Radio in which he said Joint List MKs were “ruining coexistence.”