Ahed Tamimi's father does not expect justice from the court as his daughter awaits trial, February 13, 2018 (Reuters)
Advertisement
Human rights group Amnesty International is calling for the immediate release of detained Palestinian teenage activist Ahed Tamimi, whose trial began on Tuesday.
Ahed Tamimi"s lawyer and father lash out against decision to try the Palestinian teen behind closed doors, February 13, 2018.﻿ (Reuters)
Tamimi's trial is being held behind closed doors despite Tamimi's request for a public trial. The next session was scheduled for the beginning of March.Tamimi rose to international fame when a video of her slapping Israeli soldiers in her village of Nabi Saleh went viral. She was arrested in an overnight raid on her home three days after the video was released. Tamimi, who turned 17 in detention, faces 12 charges including aggravated assault and incitement. Human rights group Amnesty International released a statement on Monday calling on Israel to immediately release Tamimi, who has been held since December 19.
Palestinian teens filmed slapping IDF soldiers (Credit: Facebook/The Israel Project)
According to the Amnesty statement, "Under the Convention on the Rights of the Child, to which Israel is a state party, the arrest, detention or imprisonment of a child must be used only as a measure of last resort and for the shortest appropriate period of time." The Israel Prison Service rejected Member of Knesset (Joint List) Yusef Jabarin's request to visit Tamimi on Tuesday, without providing a reason."It is my right as a member of Knesset to visit Tamimi and examine the conditions of her imprisonment and her treatment," said Jabarin. "She is a minor whose detention requires continued public criticism. The Prison Service's refusal to allow me to visit her is arbitrary and vindictive, and is also intended to put pressure on Tamimi and her family."The court ruled against bail in January, ordering that Tamimi and her mother, Neriman Tamimi, who was arrested alongside her daughter, be jailed until the end of their trials. Judge Maj. Chaim Bililati ruled that Tamimi was considered dangerous due to her history of incitement, throwing rocks and shoving soldiers, and thus should be kept in custody. The ruling evoked mixed reactions. Tamimi's attorney Gaby Lasky and B'Tselem, the Israel Information Center for Human Rights in the Occupied Territories, slammed the decision, saying that it showed a deeper system of injustice within the IDF West Bank Courts. B'Tselem released a statement condemning the ruling and policy of IDF courts: "Remand in custody – even of minors – is part of the routine of oppression that Israel employs against Palestinians, with the full backing of the military courts, a system in which both judges and prosecutors are always military personnel, the defendants always Palestinian and the conviction rate almost 100%."Defense Minister Avigdor Liberman, on the other hand, praised the decision and detainment of Tamimi. In December, Liberman threatened to retaliate against the Tamimi family, saying, “Everyone involved, not only the girl but also her parents and those around them will not escape from what they deserve." He defended the actions of the IDF and said that Tamimi's arrest was a message for Palestinians: “Whoever goes wild during the day, will be arrested at night. This is also an important message.”Former Israeli Ambassador to the US MK Michael Oren even went so far as to question whether or not the Tamimi family was a real family. He tweeted: “The Tamimi family—which may not be a real family—dresses up kids in American clothes and pays them to provoke IDF troops on camera. This cynical and cruel use of children constitutes abuse. Human rights organizations must investigate!”The Tamimi family has been known for years for inciting against Israel. Tamimi herself has a long history of activism; she was photographed as a child threatening to punch an Israeli soldier, holding back a soldier who was trying to detain a Palestinian boy and protesting in various other situations. Her childhood activism gained her some international recognition and she was hosted by Turkish president Recep Tayyip Erdogan in 2012. 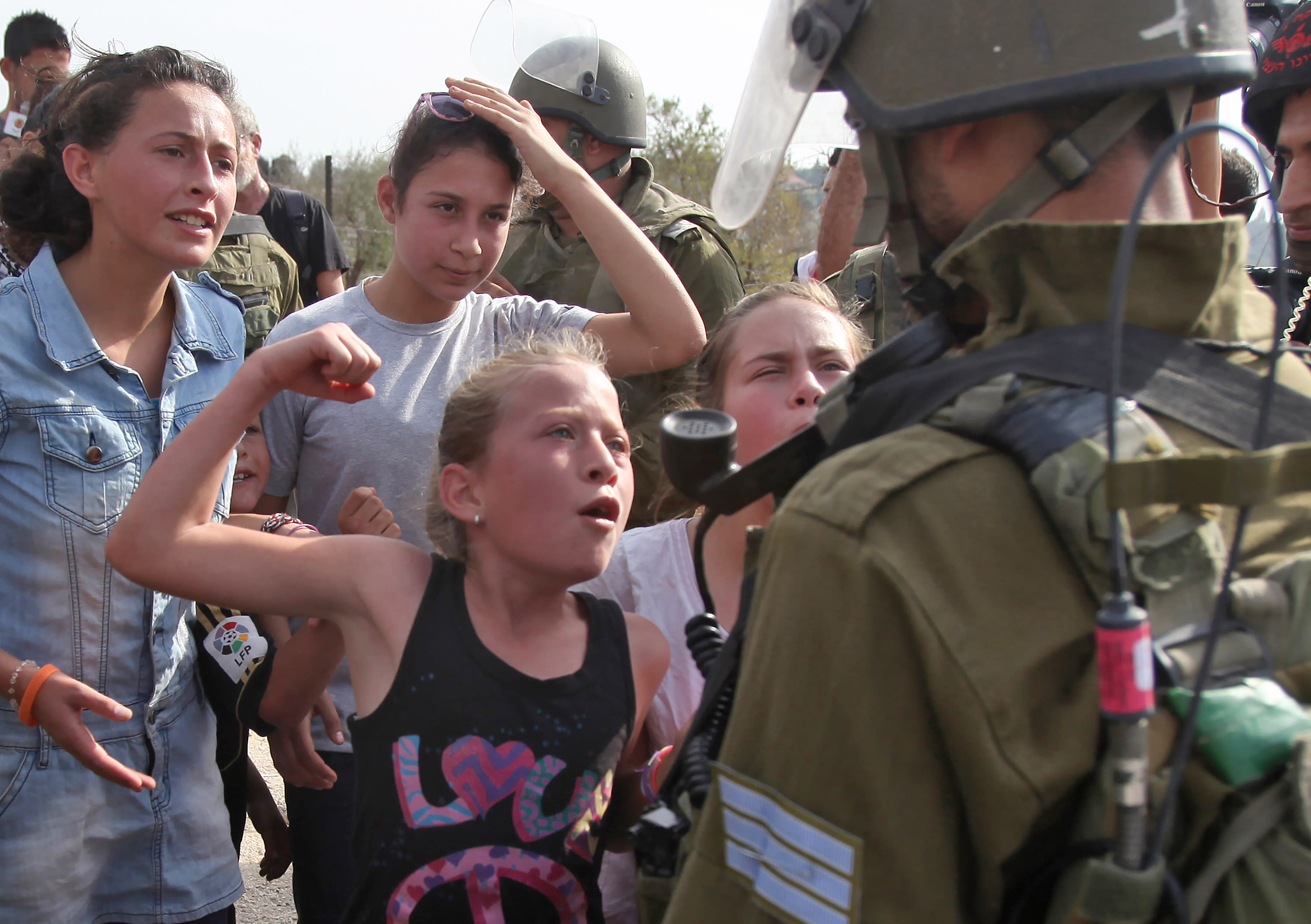 Ahed Tamimi gestures in front of an Israeli soldier on November 2, 2012. (ABBAS MOMANI / AFP)
Tamimi's father, Bassem Tamimi, has stated that he does not believe his daughter will receive a fair trial. "We don't expect justice from this court," He told Reuters. "They are trying to maximize the charge so they can maximize the sentence because they are controlled by extreme right Israeli public opinion."Amnesty claims that Tamimi's detention is not a unique case. According to the human rights organization, the Israeli army is currently detaining around 350 Palestinian minors, and subjecting them to "ill-treatment, including blindfolding, threats, solitary confinement and interrogations without the presence of their lawyers or family members."Yonah Jeremy Bob, Tovah Lazaroff and Reuters contributed to this report.