Al-Aqsa TV: Death to Israel, turn them into body parts, roast them

"Al-Asqa TV promotes all the components of Palestinian terror, including murder of Jews, suicide bombings, kidnapping of soldiers, bombing our cites and destruction of Israel." 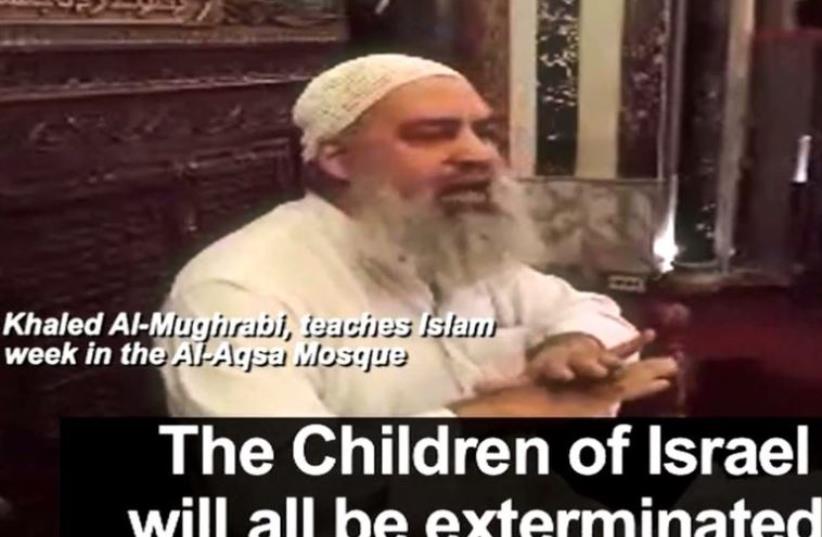 Al-Aqsa Mosque preacher- Jews will worship the Devil and then be exterminated by Muslims
(photo credit: screenshot)
Advertisement
"Declaring Al-Asqa TV a terror organization is a precise labeling," said Itamar Marcus, director of Palestinian Media Watch (PMW), a media watchdog group, commenting on Netanyahu's decision to declare the Hamas-affliated Al-Aqsa TV channel a terrorist organization on Wednesday."Al-Asqa TV promotes all the components of Palestinian terror, including murder of Jews, suicide bombings, kidnapping of soldiers, bombing our cites and destruction of Israel," Marcus continued. "It uses all the means available on TV to make its messages compelling to the Palestinian population, including religious sermons, children's programs and even music videos celebrating murder."PMW recorded the words of a Hamas music video aired on the channel: "Strap on an explosive belt... O Martyrdom seeker, respond to Al-Aqsa's call... send them to Hell... Let fire burn them, turn them into body parts, roast them."
The Al-Asqa TV station was attacked by IDF forces in an airstrike in November 2018 and its studios were destroyed. The airstrike took place during a flare-up of violence in which Hamas fired hundreds of rockets at Israel. A half hour before the TV station was bombed by IDF forces, the channel broadcast a music video declaring "Death to Israel," while scenes from terror attacks and funerals of Israeli terror victims played on the screen, as reported by PMW."DEATH TO ISRAEL" flashed across the screen in Hebrew as an Arabic song blared from the speakers, "Expel the thieving occupier from the enraged land of Jerusalem. Rid your house of that one, that Zionist in his humiliation. Write 'death, death, death to Israel' with flowing blood. And with the bleeding body cause death, death, death to Israel."When the funeral of the Israeli terror victims appeared on the screen, another song blared with the words, "Be red death. Have no mercy on the army of aggression that wears the clothes of the soldier and the settler."Following the IDF airstrike, the channel was forced to go off the air but this proved short-lived and they quickly began broadcasting from a new location, leading to Netanyahu's decision on Wednesday to declare it as a terrorist organization.