In a new audio recording, al-Qaida leader says attacks against US are what is needed to liberate Palestine. 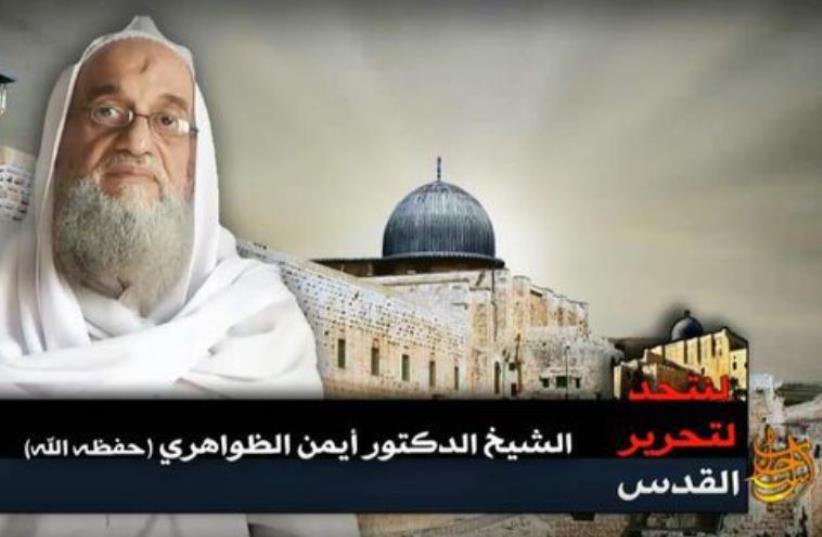 Screenshot from the audio-video recording 'To unit for the Liberation of Palestine' show's Zawahri standing in front of the Al Aqsa Mosque
(photo credit: screenshot)
Advertisement
Al-Qaida leader Ayman al-Zawahri released a new audio message yesterday titled “To Unite for the Liberation of Jerusalem,” criticizing Israel’s “attacks against the al-Aksa Mosque” and calling for more attacks against Israel and the West.In the message, Zawahri said that “Muslims around the world have learned about the Jewish attacks on the Blessed al-Aksa Mosque.” He praised the stabbing attacks carried out by Palestinians against “the Jews,” especially those who plotted attacks knowing they would be killed.Yet rather than concentrating on attacks against Israel, the al-Qaida leader offered a more large-scale approach to “liberating Palestine."“Two things are necessary for the liberation of Palestine,” claimed Zawahri.  “First is striking the West and especially the US on its own soil, and attacking their scattered interests in every place. The supporters of Israel must pay with their blood and economy. This will be their price for supporting Israel’s crimes against Muslims and Islam.” To this effect, Zahwari called for more attacks like September 11th and the bombings in Madrid and in London. The second important thing Zawahri called for in order to “liberate” Palestine is “the founding of an Islamic State in Egypt and the Levant, in order to mobilize the nation for the Liberation of Palestine. This could can only be done through the path of unity. We must reject the conflict and stop the fighting between the Jihadi fighters.”The primary emphasis of the message was a call for unity between Islamic fighters in the ongoing war against the West. “Today we face aggression from US, Europe, Russia, the Appostates (the Shi’ite Muslims) and Christians. We have to stand together from eastern Turkistan to Morocco,” requested the al-Qaida leader.However, despite his message of unity, Zahwari attacked the Muslim Brotherhood and Salafis in Tunisia and Egypt for joining the secular governments that have led people to “a loss of religion.” He warned the Palestinian jihadists to avoid such “deviant methods.”

Al-Qaida responding to the rise of ISISThe tone of the interview is in many ways classic al-Qaida but some with post-IS rise changes. Since the leadership of Bin Laden, al-Qaida has focused on fighting the “far enemy,” meaning the West and especially the US, while keeping its eye on the “near enemy,” meaning the secular Arab Regimes as well as Israel. The idea was: first destroy the military backer of Arab Regimes and Israel and then the regimes will fall easier. Therefore, it is no surprise that Zawahri  first calls for attacks against the US in order to “liberate” Palestine. Zawahri’s call for an Islamic State in the Levant and Egypt and his plea for unity amongst the jihadi fighters reveals the impact the rise of IS has had on al-Qaida. Though ISIS was once part of al-Qaida, the two groups are now bitter rivals. When Abu Bakr al Baghdadi claimed himself the Caliph of the Muslim nation in October 2014, it was a stab in the back to al-Qaida who did not even see it coming. But IS’s success in fighting the “near enemy” has caused al-Qaida to reform its approach. For al-Qaida, establishing a Caliphate has become a present goal and absolute unity essential for the battle to continue.

Dov Lieber is an Middle East affairs analyst and freelance reporter. You can find him on twitter: @Dovlieber