Analysis: What is Netanyahu prepared to give to become part of the Sunni Bloc?

The Egyptian foreign minister's visit to Jerusalem was spurred by Israel's recent diplomatic successes, but what do Cairo and other potential Arab allies expect from Israel in return? 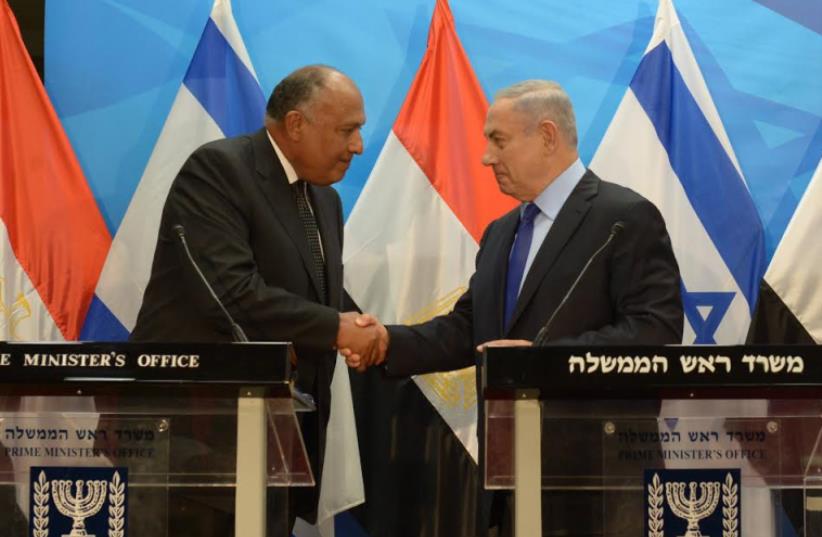 Prime Minister Netanyahu meets with Egypt's FM in Israel
(photo credit: PRIME MINISTER'S OFFICE)
Advertisement
Egyptian Foreign Minister Sameh Shoukry's surprise visit to Jerusalem and his meeting with Prime Minister Benjamin Netanyahu on Sunday is just a public expression of the special relationship - particularly in regard to security cooperation - that has been unfolding between the two countries over the last two years.The two countries have common interests: the fight against ISIS, which hurts Egypt economically and damages its tourism revenue; isolating Hamas; and, a desire to block Iran's influence. A former senior Israeli official told Bloomberg on Monday that Israeli drones have participated in the Egyptian war against ISIS in Sinai and that there is close intelligence cooperation between the two countries.The Netanyahu government's recent diplomatic and security successes with Turkey, and his trip to Africa, served as a catalyst for Shoukry's visit on Sunday. The reconciliation agreement with Turkey, which isn't exactly Egypt's "cup of tea," as well as Netanyahu's summit with seven east African leaders - some of whom Egypt has clashed with (mainly Ethiopia) over the distribution of Nile River water - further strengthened Israel's standing as a regional power.It can also be surmised that Shoukry's visit was sanctioned by Saudi Arabia, Egypt's "sponsor," which provides Cairo with billions of dollars. Without this aid, the Egyptian economy would fall to even lower depths. According to the website Intelligence Online, security ties between Israel and the Saudis have also been developing recently, and several weapons deals in the field of intelligence have even been reported.

What does Netanyahu offer the Sunni world?So, after two years of covert contacts, the visit brings to the surface the relations between Israel and Egypt, which have mainly been carried out under the radar. And because there are no free lunches, it is understood that Egypt expects to be compensated by Israel. The hoped-for compensation in Cairo is Israel's tacit agreement to advance diplomatic steps with the Palestinian Authority. This is what Shoukry emphasized in his comments following his meeting with Netanyahu. The visit, in this respect, is a continuation of Egyptian President Abdel Fattah al-Sisi's May speech in which he raised the idea that came to be known as "the Egyptian initiative to hold a regional peace conference."To what degree Netanyahu will be prepared to answer Egypt's call is another question. He knows well that the Palestinian issue is not a top priority in Egypt's diplomatic and security agenda. However, he is also aware of Egypt's sensitivity in everything connected to its status in the Arab world.If the prime minister is genuinely interested in putting Israel in what he calls "the Sunni bloc" - Saudi Arabia, United Arab Emirates, Kuwait (which has lately spoken openly about making peace with Israel), Jordan and Morocco - which would put an iron wall before the "Shi'ite Bloc" that Iran is trying to build in Syria,  Iraq and Lebanon (Hezbollah), he must also be prepared to give something in return.