Analysis: Nakba memory not what it used to be amid regional chaos

Perhaps a number of Palestinians in the territories or within Israel still are motivated to mark the day, but it appears that the Arab world is failing to be aroused as in the past. 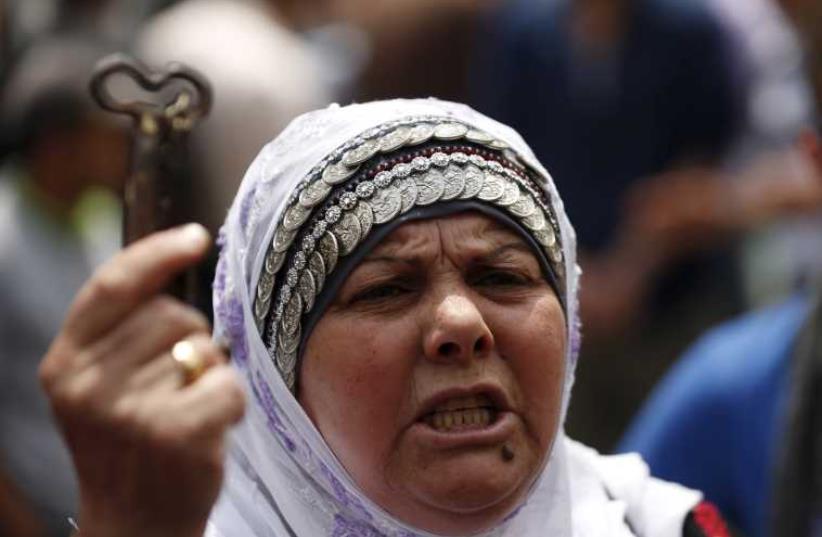 A woman holds a symbolic key as she takes part in a rally ahead of "Nakba Day" in Ramallah on May 13, 2015
(photo credit: REUTERS)
Advertisement
Israeli Arabs and Palestinians throughout the world mark Nakba Day, or “day of catastrophe,” on May 15, the day after Israel’s founding in 1948, but with the regional chaos in recent years, it appears that the day may be losing its luster.Perhaps a number of Palestinians in the territories or within Israel still are motivated to mark the day, but it appears that the Arab world is failing to be aroused as in the past, because more pressing and worse “nakbas” are going on all around.Palestinians in the West Bank and Gaza as well as Israeli Arabs staged protests on Friday to commemorate Nakba Day, which also marks when some 650,000 Arabs fled or were forced to leave their homes as a result of the war Arab nations launched to destroy the Jewish state.Arabs throughout the Middle East, apart from Palestinians or Israeli Arabs, are primarily concerned with vicious civil wars, economic needs, and Islamist terrorism raging within their countries.Whether in Iraq, Syria, Lebanon, Egypt, or the Gulf states, the main issue being talked about is the regional sectarian struggle between the Shi’ite axis led by Iran and the Sunni Arab forces, including jihadist groups.When leaders and top officials from Saudi Arabia and other Gulf states were in Washington last week, it is doubtful that the Palestinian issue, much less the nakba came up at all.And Iran-ally Hezbollah’s Hassan Nasrallah seemed to say as much, according to its Al-Manar satellite television station, giving lip service to the Palestinian Nakba Day and then going on to say that the new jihadist threat is the new nakba for the Islamic nation. The US is plotting to fragment and destroy the Islamic nation through the use of jihadist groups, he claimed.In other words, Nasrallah is saying that, while they sympathize with the Palestinian nakba, the real nakba that needs to be of concern is the fighting going on in the region right now.Zvi Mazel, who served as Israel’s sixth ambassador to Egypt and is a fellow at the Jerusalem Center for Public Affairs today and a contributor to this newspaper, told The Jerusalem Post that even if hostility toward Israel is still rife in Egyptian media, the Palestinian issue has lost its shine in recent years as the country has been busy with its own survival.In addition, said Mazel, neighboring Gaza is ruled by Hamas, a wing of the Muslim Brotherhood, which is banned in Egypt and accused of endangering Egyptian security. For these reasons “it is easy to understand why the so called Nakba Day was not prominent in the Egyptian media. Regarding the idea of the nakba – it can only be considered as a shrewd Palestinian propaganda trick to make the world forget Arab opposition to the creation of an Arab state alongside Israel and the Arab collective effort to destroy Israel in 1948,” he argued.Reuters contributed to this report.