For the past 328 days, Nuseir has been traveling the world - from Nigeria to Myanmar, the Philippines to Mount Fuji - making daily one-minute videos. 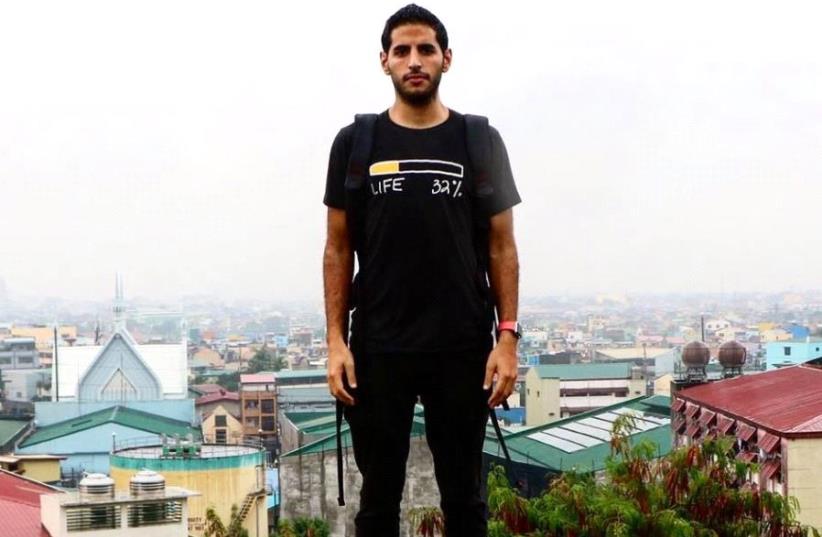 Nuseir Yassin in the Philippines
(photo credit: FACEBOOK)
Advertisement
BETHLEHEM - A year ago, Nuseir Yassin, a 24-year-old Harvard graduate, was living in New York city, working for a successful hi-tech company and earning $120,000 a year. Despite it all, he couldn't escape the feeling that life was passing him by.So for the past 328 days, he has been traveling the world - from Nigeria to Myanmar, the Philippines to Mount Fuji - making daily one-minute videos that shine a light on the people, places and passions he comes across: good, bad and in-between.The style and format - quick cuts, an engaging delivery and snappy subtitles - have helped make the videos go viral: at last count, his Nas Daily page on Facebook had 500,000 likes and some of his mini-films have earned 25 million views."I just wanted to do something that felt meaningful," Yassin, who goes by the name Nas, told Reuters as he set about making his 328th video, in Bethlehem, where he decided to explore how distant the Palestinian Territories can feel versus how real it is."I realized that I'd lived 32 percent of my life and there was so much more I wanted to do, so I quit my job," he said by way of explaining his decision, one that left his colleagues in New York and his Arab-Israeli parents shocked.In every video he wears a t-shirt bearing an image of a battery charger showing 32 percent of life complete. Yassin, now 25, said the Palestinian videos were challenging because it was both familiar and unfamiliar territory.Raised in the Arab town of Arraba in northern Israel, Yassin grew up speaking Arabic and Hebrew, but he had spent little time in the West Bank, Gaza and east Jerusalem, the territories the Palestinians want for their own state.A bright student, he left Israel when he was 18, after earning a scholarship to Harvard. There he studied computer science and economics and was quickly snapped up by the hi-tech industry, working for PayPal and other firms.But a feeling of wanderlust soon consumed him and he decided traveling the world and making a video of his life each day was a project he could immerse himself in. Having saved a sizeable amount of money, the finances made sense."Rather than spending $3,500 a month in New York, I decided it would be better to budget $100 a day and keep traveling," he said. "Some days I spend more and I'm sad, some days less and I'm happy, but basically I can keep doing this for a while."In the early stages, Yassin felt his videos were sometimes touristy - "look at this place," "how cool is this?" - but since gaining an international following, he has begun to structure each more carefully, with a script and a point, however lightly delivered.In recent days, he has explored the high cost of living in Israel, the social gaps between Israeli Jews and Israeli Arabs, efforts to bring both sides of the Israeli-Palestinian conflict together via culture and security issues in Israel. It is his first time back in his home country since day 60 of the project - he came to get a visa for his next destination, Morocco. The places he has visited along the way - from Easter Island to the Philippines - have left him feeling that the world is a far smaller than he ever imagined growing up."I've learnt how amazingly flexible people are," he said. Asked if he would stop when he reaches 365 days, he didn't hesitate: "I don't see why I should. I'm enjoying it."