The Nakba, translated from Arabic to mean "catastrophe," is the Palestinian narrative following the establishment of the state of Israel in 1948. 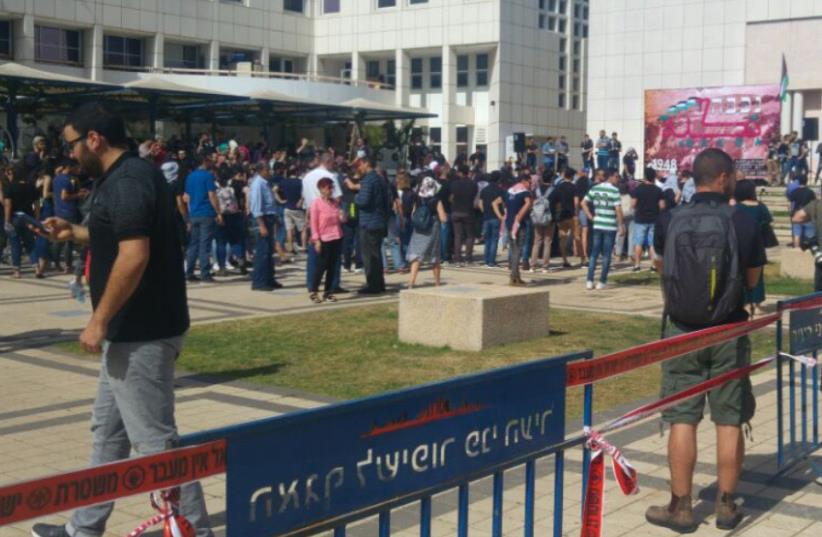 Nakba Day protest at Tel Aviv University
(photo credit: DANIEL ALTMAN)
Advertisement
Arab-Israelis held a rally Wednesday afternoon commemorating "Nakba Day" at the entrance to the University of Tel Aviv. The Nakba, translated from Arabic to mean "catastrophe," is the Palestinian narrative following the establishment of the state of Israel in 1948. Yom an-Nakba, or “Day of the Catastrophe” is observed by Palestinians and Arab-Israelis as the day where an estimated 700,000 people became refugees following Israel's War of Independence fought almost 70 years ago. Riziq Salman, a student at Tel Aviv University, said that “the event started following the declaration of the Nakba law.""The goal of the law," he continued, "was to silence the Palestinian narrative and try to paint the picture as if the whole Palestinian narrative is based on a lie.”The bill, passed by the Knesset in 2011, gets its name because it would require the state to fine local authorities and other state-funded bodies for holding events marking Israeli Independence Day as the “Nakba” or for supporting armed resistance or racism against Israel. It also bans desecration of the state flag or national symbols. Salman added that the “Zionist narrative is based on factual distortion” and that "our goal is to not allow this deceitful narrative to spread.”Salman also said that “we are speaking here to students, speaking in Arabic and Hebrew and English in order to spread our story to all the students that are here at the University and to anyone who wants to hear.”Rita Sobko, Vice-President of the Tel Aviv University Likud branch, “Lavi”, said that she looks at the protest and feels pride.“Why?... Because (it represents) the true essence of the democratic State of Israel, that there is respect for the rule of law and freedom of speech.” Sobko further stated that government-funded institutions like Tel Aviv University allows the protest “and our security forces will protect the participants... just like they will protect us in our counter-protest.”According to Sobko, the university's Arab political party branches are flourishing, something that would not be possible under any “crumbling Arab dictatorship." "Can someone even imagine a situation where in an Arab State a group of Jews could protest in a [public] square for the Settlements? Here exactly the hypocrisy lies.” Im Tirtzu, a right-wing grassroots organization who set up a counter protest, reacted to the ceremony with loudspeakers, waving Israeli flags and chanting: “There is no Palestine” and “Am Yisrael Chai” (The people of Israel live.)Speaking with The Jerusalem Post, Im Tirtzu Director of External Relations Eytan Meir said that “Nakba Day is the oldest tool in the well-oiled Palestinian, Arab propaganda machine used to delegitimize Israel and to undermine its right to exist.”“We are here today to send a clear message that we will not be silent in the face of this deceitful lie that seeks to rewrite history and whitewash the attempted annihilation of the Jewish people in Israel a mere three years after the Holocaust.”Ben Hartman contributed to this story.