PA official: "If the Arab League secretary-general is packaging that as a new plan, we have no problem." 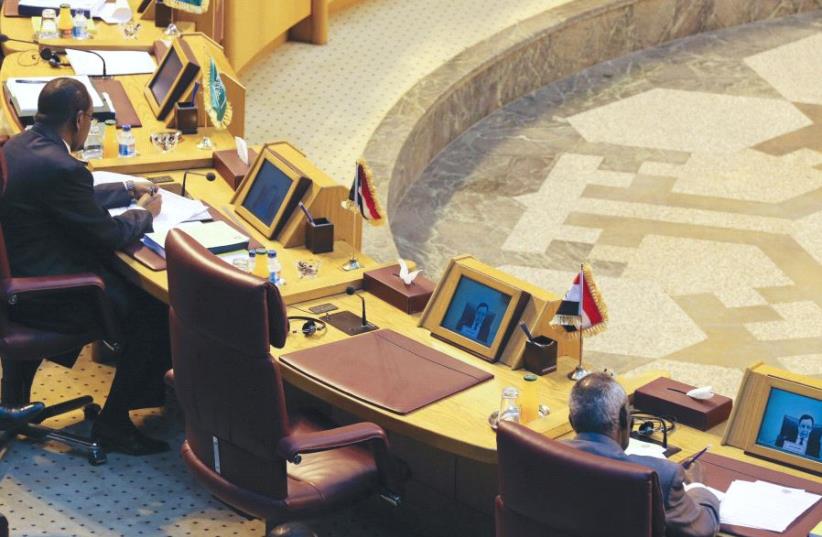 WHAT IF Israel was sitting here? Members of the Arab League gather at a recent meeting.
(photo credit: REUTERS)
Advertisement
The Palestinian leadership will present “a new plan” to resolve the Israeli-Palestinian conflict to the upcoming Arab League Summit in Jordan, Arab League Secretary-General Ahmad Abul Ghaith told a pan-Arab, London-based publication.“There is a desire on the Palestinian side to reformulate some ideas... They [the Palestinians] promised to put forward a new plan pertaining to the Palestinian issue in general,” Abul Ghaith told Al-Sharq al-Awsat in an interview published on Wednesday, without elaborating.The Arab League Summit, which Arab officials have said will be consequential for the Palestinian issue, is slated to take place on March 29 near the Dead Sea in Jordan.
Palestinian Authority Rami Hamdallah PM hopes to set new parameters for peace with Israel.
Ahmad Majdalani, a confidante of Abbas, however, denied the report, saying that it “is not correct.”“As we have in the past, we support the Arab Peace Initiative as a resolution to the conflict. We have no new plan,” Majdalani told The Jerusalem Post in a telephone interview.“The idea of a new plan has not been discussed.”The Palestinian leadership has consistently stated its support for the Arab Peace Initiative, a peace proposal first approved by the Arab League in 2002, without amendments.The Arab Peace Initiative calls for the establishment of a Palestinian state along the 1967 borders, the end of claims, and a “just and agreed upon” solution to the refugee issue.Majdalani added that the PA president will put forth a number of points, which he has previously, in his speech to the Arab League Summit.“The president will affirm his support for the two-state solution, continued action in international forums, and the need for the Arab world to treat the Palestinian issue as the main regional issue,” Majdalani stated.Another senior Palestinian official, who spoke on the condition of anonymity, confirmed Majdalani’s statements.“President Abbas will reaffirm his support for the Arab Peace Initiative and the two-state solution,” the senior official said. “If the Arab League secretary-general is packaging that as a new plan, we have no problem.”Abbas completed a regional tour over the past several days, visiting the Qatari Emir Tamim bin Hamad al-Thani and Egypt’s President Abdel Fattah al-Sisi, and is scheduled to meet with German Chancellor Angela Merkel in Berlin and members of the European Union parliament in the coming days.Fatah Central Committee Member Azzam al-Ahmad said on Monday that Abbas’s meetings with the Qatari emir and the Egyptian president were “positive.”Ahmad said that Abbas and Sisi agreed to coordinate all measures related to the peace process, and that the Egyptian president vowed to discuss the Palestinian issue in his meeting with US President Donald Trump at the beginning of April.The meeting between Abbas and Sisi came after a long period of cold ties between the two leaders, who had not held a formal meeting in approximately 10 months.The deterioration in ties between the two leaders relates to a number of issues including Egypt’s cooperation with Israel on the peace process without including the Palestinians and Egypt’s amicable relations with Abbas’s top rival, Muhammad Dahlan.