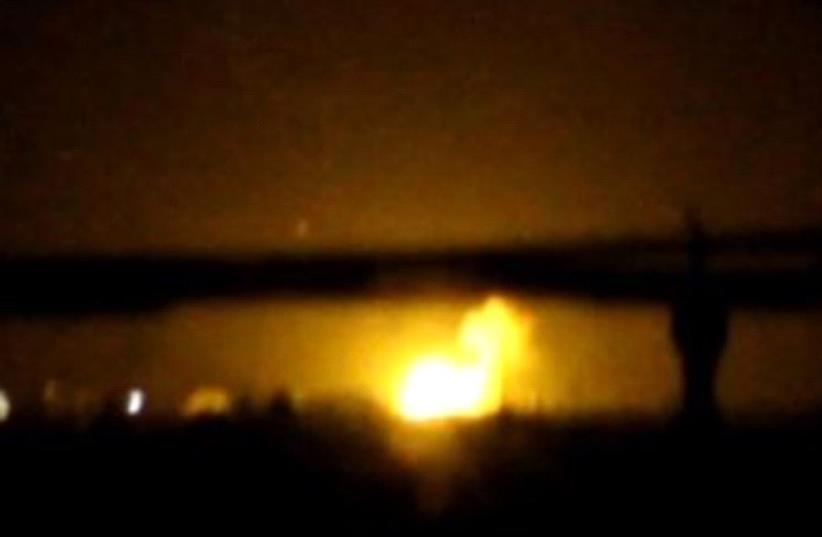 Explosion in Syria
(photo credit: ARAB MEDIA)
Advertisement
An Israeli strike on Thursday hit an arms supply hub operated by the Lebanese Hezbollah group near Damascus airport where regular supplies of weapons from Tehran are sent by commercial and military cargo planes, a regional intelligence source said.The depot handles a significant amount of weapons that Tehran, a major regional ally of Syrian President Bashar al-Assad, sends regularly by air, the source who requested anonymity said, without giving further details.The source said the arms depot gets a major part of the weapons supplied to an array of Iranian backed militias, led by Hezbollah, which have thousands of fighters engaged in some of the toughest fronts against Syrian rebels.

A spokeswoman for the Israeli military, asked if Israel had been involved in carrying out air strikes targeting Damascus airport, said: "We can't comment on such reports." Jerusalem has a policy of neither confirming or denying strikes attributed to it in Syria, but in an interview to Israeli news site Walla, Israel's Intelligence Affairs Minister Yisrael Katz said the attack matched Israel's Policy of not allowing sophisticated weapons to reach Hezbollah. The strike came just days after Al Jazeera reported that the IDF struck a base belonging to a pro-Syrian militia near Quneitra.In a statement released by the National Defense Forces, a pro-regime militia, the alleged strike targeted the Naba Fawar base, killing three fighters and wounding two others.On Tuesday a senior IDF officer revealed new information regarding the most serious incident to take place between Israel and Syria in years. On March 17, IAF jets were targeted by Syrian missiles, an attack the IDF responded to immediately.However, the senior officer revealed that not only did the IDF launch an Arrow missile interceptor to shoot down the Syrian missile, it also destroyed 100 Syrian missiles that were on their way to Hezbollah in Lebanon.According to the officer, this action against the Syrian regime was not the first time Israel has operated against its northern neighbor in recent years. Israel usually refrains from publicly discussing air strikes it reportedly carried out in Syria, but it confirmed the one that took place on March 17.Joy Bernard and Anna Ahronheim contributed to this report.