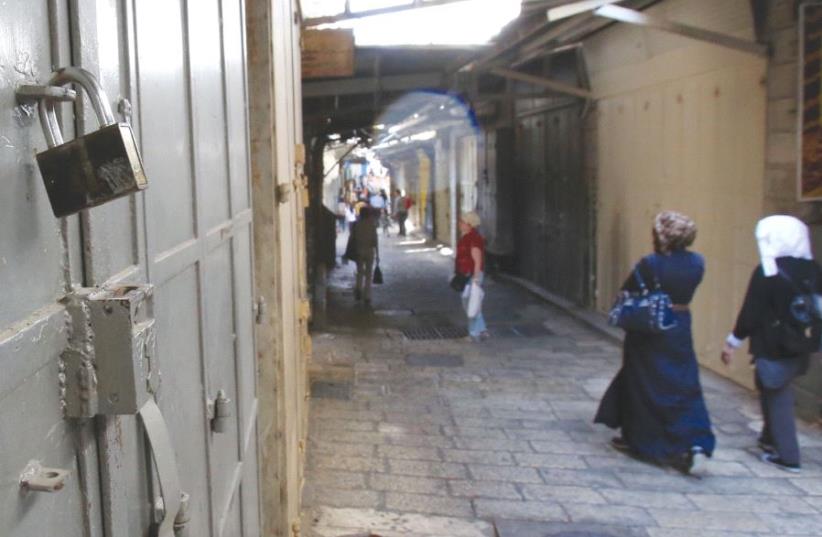 PEOPLE WALK past one of the more than 1,400 closed shops in the Muslim Quarter in the Old City of Jerusalem on April 27, 2017
(photo credit: MARC ISRAEL SELLEM/THE JERUSALEM POST)
Advertisement
The normally bustling Muslim Quarter in Jerusalem’s Old City resembled a ghost town on Thursday, as over 1,400 Arab merchants shuttered their shops to demand the release of Palestinian prisoners who have staged an ongoing 11-day hunger strike.According to Arab media, the strike was initiated by the National Committee to Support the Hunger Strike, which urged Palestinian store owners to participate to show solidarity for the more than 1,000 prisoners who are demanding improved prison conditions.In a statement, Khalil Rizeq, head of the Union of Palestinian Chambers of Commerce, said the strike was also being carried out in the West Bank and Gaza Strip.
Palestinians hold rallies as hundreds of prisoners in Israeli jails begin a hunger strike (credit: REUTERS)
“This general strike is unprecedented in many years,” said Rizeq. “All Palestinian industries, such as transport, stores, all of the private sector and commercial institutions are participating, with the exception of doctors and students nearing graduation.”Just past the Old City’s flashpoint Damascus Gate entrance – where numerous deadly stabbings against police and Jews have taken place – there was virtually no activity, with the exception of a few pharmacies and bakery shops permitted to remain open.Ahmed Ehmad, owner of Old City Clothing, whose 23-year-old son has been imprisoned for seven years for what he deemed “political reasons,” said the merchants are demanding that 6,500 other political prisoners are released.“We are closing today to demand the prisoners who are on hunger strike, and all the other political prisoners, are released,” said Ehmad a few meters outside his closed store. “In the Muslim Quarter of the Old City, there are 1,480 Arab shops, and they are all closed today.”While he said the strike was initially scheduled to last one day, Ehmad added that it may continue indefinitely, pending the outcome of the prison situation.Asked if he was concerned about the considerable financial loss resulting from the strike, Ehmad replied, “We don’t care.”“We are telling the whole world, especially the Americans, that if America is the one preparing to make peace than their government must stop only taking the side of Israel and leaving the Palestinians to survive from 1967 to today,” he said.“America must be honest and straight, and treat the Israelis and Palestinians as equals, and make peace for the Palestinian people as well.”According to Arab estimates, there are currently over 6,500 Palestinians incarcerated in 24 prisons and detention centers throughout the country.Another merchant, who requested anonymity, said he was willing to remain closed until all 6,500 are released.“I don’t care if I go bankrupt, the Israeli government must release the prisoners immediately,” he said. “This is just the beginning.”Early Thursday morning, police released the corpse of Siham Rateb Nimir, a 49-yearold Palestinian woman from the Shuafat refugee camp who was shot dead after attempting to stab a Border Police officer with scissors outside Damascus Gate late last month.The conditions of her release included a guarantee from family members and friends to hold a peaceful funeral, or forfeit thousands of shekels provided as a security deposit.Nimir was later buried next to her son, Mustafa Nimir, of Ramat Gan, who was shot dead during a suspected car-ramming attack on police at the Shuafat refugee camp’s checkpoint on September 5.According to police, the vehicle, driven by his brotherin- law, Ali Nimir, attempted to run down several officers, despite repeated warnings to stop.Claiming their lives were in imminent danger, Border Police officers responded by opening fire on the vehicle, shooting the driver and killing the passenger, identified as Mustafa.None of the officers was wounded, and police deemed the incident an attempted terrorist attack.However, days later, a video taken of the shooting airing on Channel 10 showed the officers firing on the vehicle after it stopped, conflicting with initial reports of what took place.Following the report, dual probes by the Justice Ministry and police were launched to investigate if deadly force was warranted.